"The following section called British and Irish sausages covers all British, Irish, English, Welsh and Scottish products. The damp weather of these islands is not suited for the production of dry sausages of salami type. There will be a constant fight with molds, in addition the winter temperatures were too cold to dry meat the way Italians or Spaniards did. Consequently, British & Irish sausages tend to be of either of a fresh type that requires cooking before serving or “puddings” which are cooked during manufacture."

The majority of British sausages include a filler material, the most popular being rusk and oats. Adding filler material to sausages has been a common practice in many countries for example buckwheat groats in Polish or German blood sausages, rice in Hungarian Hurka, Swedish sausage is made with potatoes, in Asian sausages rice and noodles are added, pumpkin can be found in Spanish Chorizo de Calabaza or in Portuguese Chouriço de Abóbora de Barroso-Montalegre, however, in English sausages adding filler material is almost the rule. British sausage-has bread in it; other sausages from around the world-don't. British sausages are full of bread and non-meat fillers. They are about 70% meat and 30% filler. Such a proportion does weaken the meaty flavor of the sausage so it is a bit of an acquired taste, that Brits really do love. Consumers in other countries prefer a higher-meat content in sausages.

Take for example Polish “sznycel.” It is a type of a hamburger where ground meat is mixed with soaked bread/rolls, egg and spices and then fried. It has a different and pleasant taste, a proof that a combination of meat with a filler material can produce an outstanding product I grew up in Poland eating “sznycel” and still love it, however, my USA born sons think of it as a poor imitation of a 100% meat hamburger. Poles are not crazy about salami type dry not smoked sausages and Italians and Spanish are not particularly fond of smoked sausages. Sauerkraut is loved by Poles, Germans and Russians, but they will find the taste of Korean Kimchi sauerkraut rather unpleasant. It requires a few tries before a person acquires a taste for a new version of a common food.

British sausages are mainly of the fresh type served for breakfast and cooked variety also known as puddings. A fresh sausage is the stuffed sausage that is not cooked during manufacture and must be refrigerated. The sausage is fully cooked when served.

Irish and English sausages are very much alike in taste, texture and presentation. They are usually made with pork, sometimes include beef, however, both include a filler as a requirement along with herbs and spices. English sausages introduce a wonderful combination of spices like sage, nutmeg, mace and ginger. Great Britain has a number of historic sausage producing regions, such as Cumberland, Lincolnshire, Yorkshire and Glamorgan.

There is a notable absence of smoked sausages in England which is surprising as the country has been the leading producer of smoked fish products. On the contrary in countries such as Poland, Germany, Russia, Lithuania or Portugal the majority of sausages are smoked. 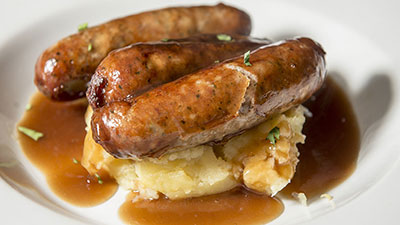 Bangers - in order to be called a banger the sausage must have a filler and must be served with mashed potatoes. Without potatoes it is not a banger, just a sausage. English banger is a typical breakfast sausage served with mashed potatoes and gravy. In England, the term banger sausage is only used to refer to the dish “Bangers and Mash”; otherwise they are simply called sausages. Bangers received their nickname during the First World War, when fillers and water were added to meat to extend its value, causing them to burst as they cooked.

Saveloy - a type of highly seasoned fine textured sausage, usually bright red, normally boiled and frequently available in British fish and chips shops, occasionally also available fried in batter. Although the saveloy was originally made from pork brains, the typical sausage is now made of beef, pork, rusk and spices. The taste of a saveloy is similar to that of a frankfurter or red pudding. It is usually eaten with chips. Saveloy drives its name from French-Swiss “cervelat” which in turn borrowed its name from Italian word “cervello” (brain) as early sausages were made with brains. 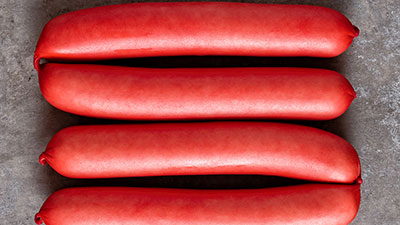 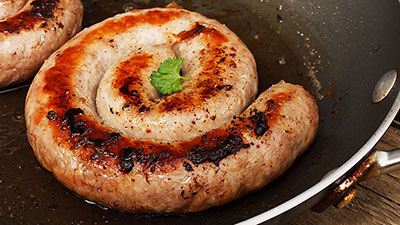 Cumberland sausage - possibly the most famous of British sausages which has been a local specialty in the County of Cumberland for more than 500 years. The meat being chopped rather than minced, which gives the sausage a distinctive meaty texture. Cumberland Sausage carries PGI, 2011 classification. 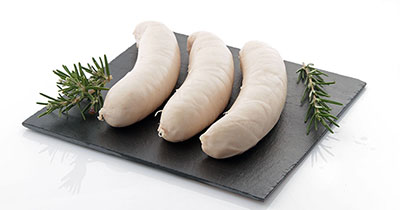 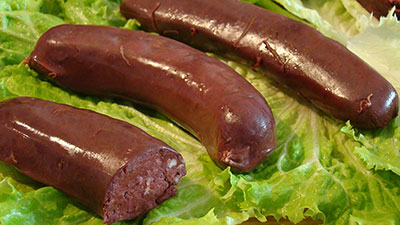 Black pudding - a sausage made with blood which is really a blood sausage. Majority of black puddings consist of fat (pork or beef), blood, onions and filler material such as oatmeal, flour and barley groats. 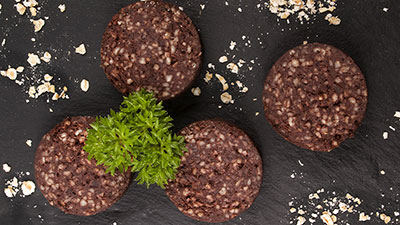 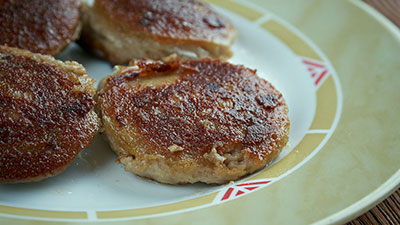 Hog's pudding - type of a large sausage produced in the West Country. The West Country is a loosely defined area of south western England encompassing the counties of Cornwall, Devon, Dorset, Somerset, and the City and County of Bristol. This West country haggis is usually based on buckwheat groats and filled into large diameter casings around two inches in diameter. It can be made with meat or pluck (heart, liver and lungs). Some sausage recipes include pork meat and fat, suet, bread, and oatmeal or pearl barley and the sausage is known as ‘groats pudding’. It is similar to a white pudding, but it is much spicier than white pudding. It may be stuffed into casings or not. 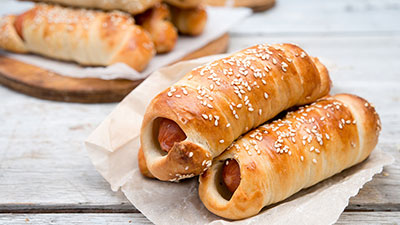 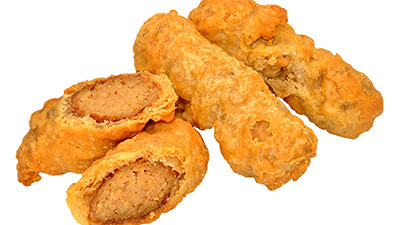 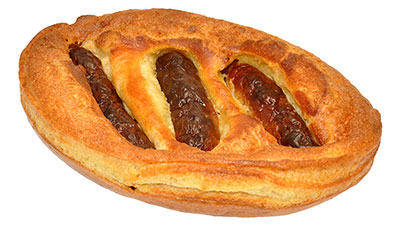 Toad in the Hole - sausage baked into Yorkshire Pudding. 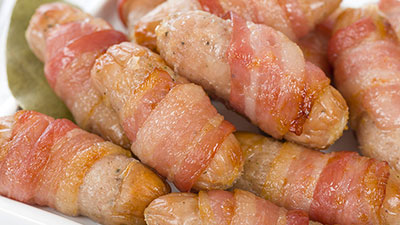 Pigs in Blankets - pork sausages wrapped in bacon and fried. 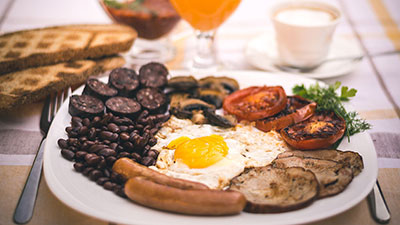 Full Breakfast or British Breakfast - there are several variations depending on if you are in England, Wales, Ireland or Scotland. Canada and the US, as well as former British colonies serve their own variations that may include corned beef hash, pancakes, grits, fruits, ham, steak, potato hash browns, bacon, Canadian bacon and other forms of preserved meats. Eggs are usually served fried to order, but may also be scrambled or poached. Traditional full breakfast included fried English sausages, fried British back bacon, eggs, hash browns or fried potato chunks, fried tomatoes, fried mushrooms, baked beans and toast.

People in Ireland don’t call their sausage “banger”, however, the Irish sausage is called a Banger, British Sausage or English Sausage in other countries. Irish Sausage is also commonly known as “English Sausage”, “British Sausage, and as “Bangers” outside of the UK; the terms are used interchangeably. The traditional recipe consists of ground pork, a bread filler (around 20%), eggs and spices. When properly cooked, the outside is crispy and tight while the inside is juicy and soft.

Irish sausage is included in traditional dishes such as: 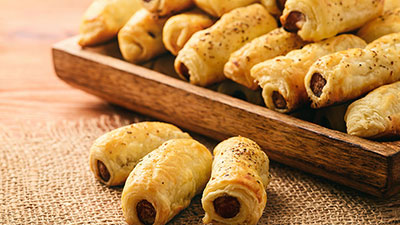 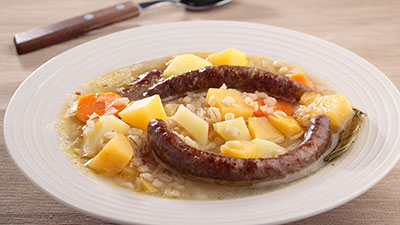 Dublin Coddle - sausages, bacon, potatoes and onions cooked together in one pot. 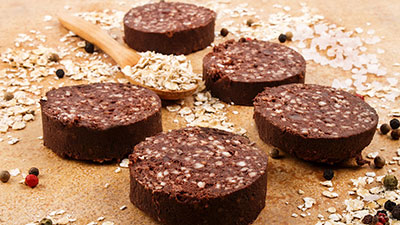 Haggis - a popular meal for the poor, as it was made from cheap leftover parts of a sheep that would otherwise be thrown away. The sheep is the most common livestock in Scotland. A traditional haggis sausage recipe describes haggis as sheep’s ‘pluck’ (heart, liver and lungs), minced with onion, oatmeal (often lightly toasted), suet, spices such as salt, pepper, coriander, cinnamon, and nutmeg, mixed with stock, and traditionally stuffed inside the sheep’s stomach, which is sewn closed. 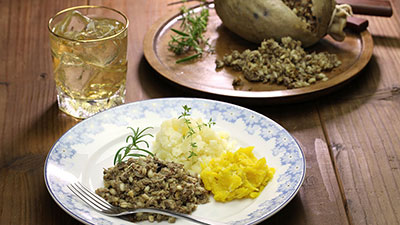 The haggis is traditionally cooked by boiling (for up to three hours). Haggis should be cooked below water boiling temperature which prevents the risk of bursting. Commercial haggis is made from pig, rather than sheep and is stuffed in artificial casings, rather than stomachs. Cooked Haggis is normally served with Scotch whisky. In 1971 it became illegal to import haggis into the US from the UK due to a ban on food containing sheep lung, which constitutes 10 to 15% of the traditional recipe.

Lorne Sausage and Square - when stuffed into casings this Scotch sausage is known as Lorne. When pressed in a baking form it becomes Lorne square. 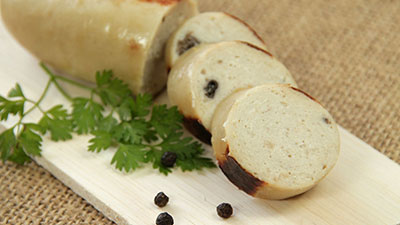 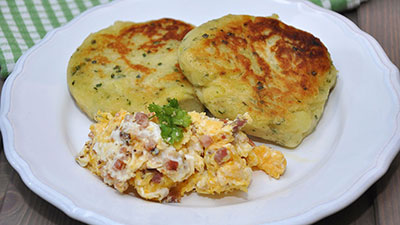 Potato scones are made from mashed potatoes, salt and flour and cooked on hot griddle until golden brown. 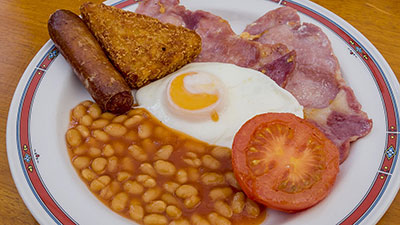 Welsh sausages are made from lamb or pork and rusk. Leeks are often added. 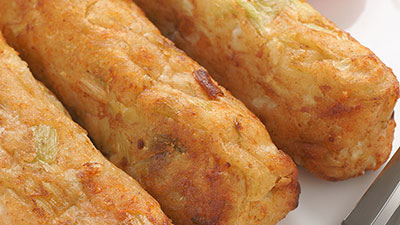 Glamorgan Sausage - a traditional Welsh vegetarian sausage, made of cheese, leeks and bread crumbs. The sausage is not stuffed into casings, but rather rolled in a cylindrical shape, dipped in egg and coated with bread crumbs. The sausage earned its name from Glamorgan cheese once made in Wales from the milk of a breed of cattle also named Glamorgan. There are few Glamorgan cattle remaining to produce milk for making Glamorgan cheese on a larger scale. However, Caerphilly is very similar and is used for making Glamorgan sausage.

The crucial ingredient that separates British, Irish and Scottish sausages from others is a filler which is applied at 20% or more. The filler can be bread, flour, rusk, bread crumbs, rice, oats, barley or buckwheat groats. 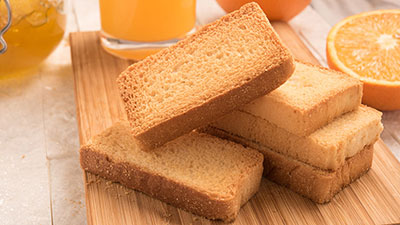 Rusk is a typical British product which cannot be easily obtained out of England. To the British, butcher rusk is a dry biscuit broken into particles, sorted by particle size and sold to butchers and others for use as a food additive in sausage manufacture. In other countries a rusk is a hard, dry biscuit or a twice- baked bread. In the USA the nearest substitution will be a cracker meal or plain bread crumbs.

Oats can be whole, steel cut or rolled flat by heavy cylinders. Most sausage recipes call for steel cut oats which can be made in different particle size. They are also referred as oatmeal. Cooked oats are known as “porridge”, the worldwide breakfast meal. Steel cut oats should not to be confused with flattened instant oats served for breakfast. Cut oats can be obtained in American supermarkets.

Similar to all other countries to lower costs most of the sausage manufacturers in UK have cheapened their formulas and have gone from pork and beef trimmings to poultry, pork, and beef trimmings. Adding water, curing accelerators and phosphates (to lock the water in) have created products of different texture and flavor.