The technology for making sausages is basically the same in France as in other countries but the texture, flavor and aroma of French sausages is original and slightly different. This may be attributed to the fact than the past sausages were made with locally grown herbs and spices and those were influenced by climatic conditions. People in certain regions developed liking for certain sausages and in time these became known nationwide.

Although French is the prettiest language of them all, nevertheless, the names of French sausages may look confusing to many. In French both words “saucisson” and “saucisse” denote a sausage, however, each word is reserved for a sausage of a different physical size namely the diameter. The saucisson is bigger sausage than the saucisse, for example Saucisson de Foie and Saucisse de Foie is the liver sausage made to the same recipe, but saucisson is thicker. The meat that goes into “saucisse” may be ground with a smaller plate. The sausage often gets its name from the filler material or peculiar ingredient when added in substantial quantity, for example Boudin Noir Aux Noix (Blood Sausage with Nuts) or Boudin Noir à la Crème (Blood sausage with Cream). 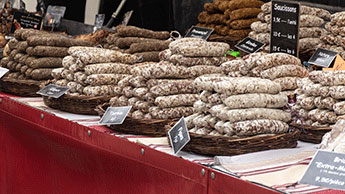 French sausages are made with aromatic spices and herbs. Oregano is less popular than in Spanish and Italian sausages. Smoking meats is popular but not to such extent like in Germany, Poland or Russia. The typical French ingredients that are incorporated in French cuisine are Quatre épices and Bouquet garni.

Quatre épices (4 spices) – a spice combination that can vary in strength and combination of spices; however, it always contains: nutmeg, cinnamon, and cloves. The fourth ingredient can be ginger, allspice, or caraway or their combination. Occasionally, a touch of white pepper is also included. Take a note that sometimes the term four-spice may apply to allspice from Jamaica. It is so called because, at grinding, it develops aromas of ginger, clove, nutmeg and pepper.

Bouquet garni - French for "garnished bouquet," is a classic herb mixture used for preparing stocks, soups, meats, and vegetables so it is not surprising that is added to sausages, too. The traditional combination is parsley, thyme, and bay leaf, but you may also find recipes that include other herbs such as rosemary, basil, chervil, peppercorn, and tarragon. 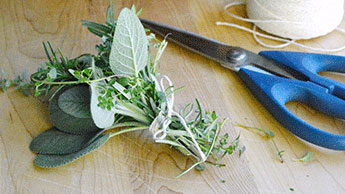 Cream – or full milk is added not only to cooked sausages (boudin), but even to liver and blood sausages.
Eggs – adding eggs to sausages is a common practice in France and Germany. In fresh and cooked sausages, they bind ingredients together and they act as an emulsifier in liver sausages.

All types of sausages may be encountered in France: fresh, cooked, liver and blood sausages, head cheeses and dry sausages (salami type).

These are not-ready-to-eat sausages. A fresh sausage is basically spiced ground meat filled into a casing. They must be fully cooked (water cooked, fried or grilled) before serving. 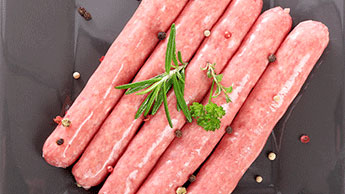 Chipolata is a small French sausage. There is also British and Italian version. 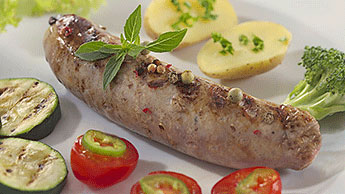 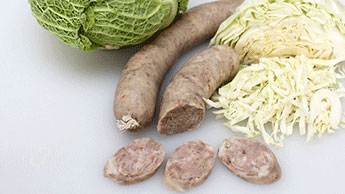 Cooked sausages. after being stuffed into casing are submitted to a thermal process. They are ready-to-eat at any time. Some sausages, usually the smoked ones, are served cold, the others taste better when they are boiled or fried. 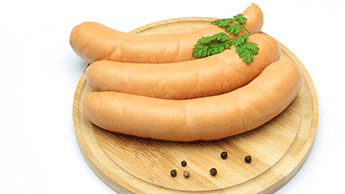 Saucisse de Strasbourg is an emulsified, smoked and cooked sausage. Strasbourg is the capital and largest city of the Alsace-Champagne-Ardenne-Lorraine region in eastern France. 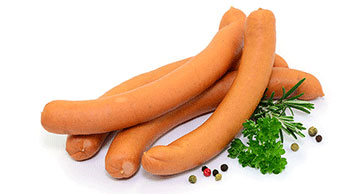 Saucisse de Francfort is an emulsified, smoked and cooked sausage. It is a French equivalent of frankfurter.

Boudin Blanc (blanc = white) is the King of French sausages. It is a light-colored cooked sausage usually made with cream or full milk, also whole egg or egg white, the latter will produce a lighter texture. As the name implies it is a white sausage (blanc = white), so lightly colored meats should be selected: pork loin, light colored pork, hard pork fat (back fat), veal, chicken breast, white flesh fish such as whiting, pollock, cod, hake, halibut, sole. White pepper is a must, natural flavoring extracts are helpful, too. The sausage texture should be uniformly white without displaying chopped herbs and spices. 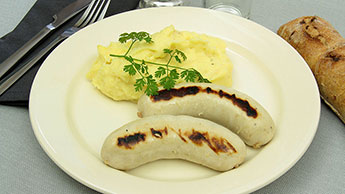 There are two methods of applying milk:

Materials used for making boudin blanc such as eggs and milk spoil rapidly so the finished sausage must be refrigerated and consumed within days. It should be noted than in in the state of Louisiana (USA) there is a number of French sausages which differ slightly from the originals, for example Boudin Blanc which is made with rice but no milk.

English call sausages that contain filling material such as groats, rusk, bread or rice “pudding. The ones that contain blood are known as “Black Pudding” as blood acquires black color when cooked. The ones without blood are called “White Pudding” because they are of light color. They are basically light-colored cooked sausages. This naming system is used in other countries like Poland, Germany, Spain and France.

In France these sausages are known as Boudin.

Occasionally, cream or full milk are added to blood sausages (Boudin Noir á la Créme). Like most blood sausages Boudin Noir is a cooked sausage, boiled in water, so it is ready-to-eat at any time. However, it tastes best when grilled, baked or fried. Keep in mind that blood becomes black when fried so the served sausage will be dark. 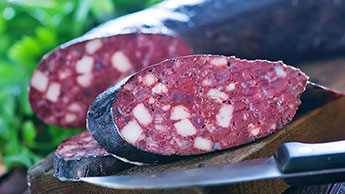 Boudin Noir de Lyon is a French blood sausage from Lyon made with blood, onions and diced fat that becomes a visible show-material. 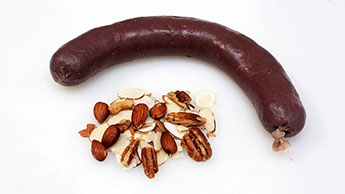 Onions Onion is one of the three major ingredients (blood, fat, onions) of any blood sausage, however, in many countries onions are added in small quantities (3-10%). In French (and in Spanish) sausages onions are usually added at 10-30% and such large amount if not prepared properly can influence the taste of the finished product. Raw onions are slightly bitter and adding 25% of raw onions is not a good idea. Secondly, cutting or grinding such amount of onions can be unpleasant experience resulting in tears and crying. For best results fry onions in some fat on medium fire until they become glassy or golden.

Spices Blood sausage likes aromatic spices so cinnamon, nutmeg and cloves are on top of the list.<.p>

Saucisson de Foie (“foie” = liver) is French liver sausage. French are masters of making great patés which they make from variety of meats and ingredients. The most famous is “foie gras” (gras = fat, foie = liver) which is made from goose or duck liver. Basically, there is not much difference between liver sausage and paté. Paté is a paste, pie or loaf consisting of a finely comminuted meat, fat and liver. If paté is stuffed into a casing it would become a sausage. In order to be spreadable a good paté or liver sausage must contain a large amount of fat. A soft fat will contribute positively to spreadability. The purpose of liver is twofold:

The egg is often added to liver sausages as it also has strong emulsifying properties, after all we make mayonnaise by whisking egg yolk with a large amount of vegetable oil.
A fresh cream is occasionally added to French liver sausages at about 3% (Saucisson de Foie a la Crème Fraîche). 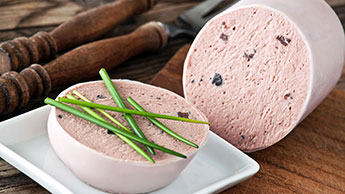 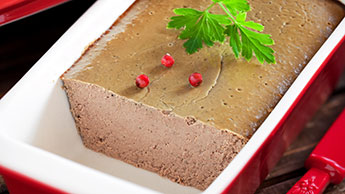 Paté can come from a variety of sources such as poultry, game, beef, seafood, lamb or pork. Foie Gras is paté made from the fattened liver of geese or ducks.

Head cheese ("fromage" = cheese) was traditionally stuffed into pork stomachs, but nowadays it is packed into large diameter (150 mm/6”) synthetic casings. It is a huge and heavy sausage. The French usually pack the product into forms so it is a solid block of meat jelly that can be cut like a cheese. The traditionally used meat was pork head and although it may sound grotesque, nevertheless pork head meat has more flavor than other cuts. Keep in mind that you can make a head cheese-like product from any meat which is rich in connective tissue such as picnic (front leg) or pork hocks and feet and skin. The idea is to produce a rich meaty stock that upon solidifying becomes aspic which will hold all meats and ingredients together. To obtain even more flavor “bouquet garni” herbs are added to water. 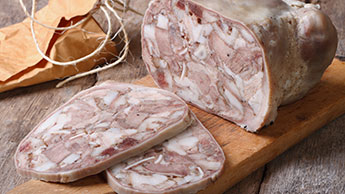 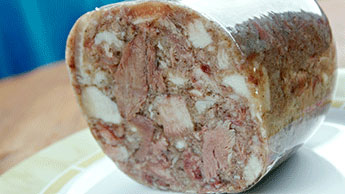 Head cheese is labor intensive, more so when stuffed into casings since it has to be cooked second time. When it is packed into forms one cooking is enough as after cooking meats are placed in forms, covered with liquid meat stock and allowed to cool and solidify. The difference between head cheese and meat jelly is that: 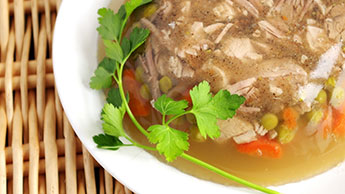 Meat jelly made with a natural aspic. 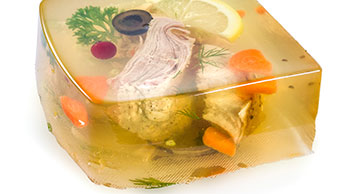 French meat jelly made with a commercial gelatin.

Meat jelly made with commercial gelatin. Gelatin has neutral taste and although it produces a clear jelly, unfortunately its taste does not come close to the one made with natural meat stock.

Salami is usually a large dry sausage and in French is called “Saucisson sec” (“sec” means “dry”). The full name often mentions the region from which the sausage originates from, for example Saucisson sec d’Auvergne (dry sausage from Auvergne) and a smaller diameter dry sausage is called Saucisse sèche d’Auvergne. Keep in mind that often “sec” may be omitted and the dry sausage can be simply called Saucisson de l'Ardèche (sausage from the Ardèche region). Dry sausage has a distinctive look and texture so it cannot be confused with fresh or cooked sausages.

Traditionally, salami has been made with pork meat and hard pork fat (back fat. French, being creative cooks, started to include nuts and hard cheeses in their sausages. Saucisson au Camembert was first made with Camembert cheese in the late 18th century at Camembert, Normandy, in northern France. Beaufort, Roquefort cheese as well as goat cheese ("fromage de chèvre") are also incorporated in French dry sausages. 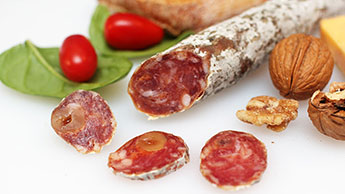 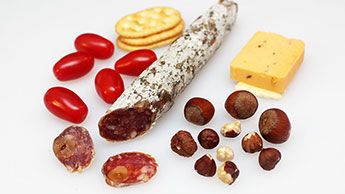 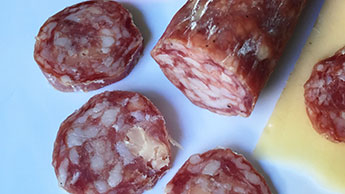 There are hundreds of great French sausage recipes and it would be impractical to list all of them on one page, but the most popular ones are listed below: