The thermally processed container should be cooled without delay to prevent the growth of thermophillic bacteria. As explained in the microbiology section, thermophillic bacteria like to grow at 122-150° F (50-66° C). It is very likely that thermophillic bacterial spores will survive thermal treatment. When the temperature inside the can drops down to (122-150° F 50-66° C), they will encounter favorable conditions to grow. For that reason commercial producers cool containers as fast as possible to about 95° F (35° C). However, a rapid depressurization of the canner and introducing cold water induces a great strain on a container which still remains under high pressure. This leads to a great pressure differential between the canner and the inside of the container and results in the following problems:

The contents of the glass jar will boil over through the still soft sealing compound. There will be less product inside, though the product will be fine and safe, as the sealant will reseal the lid when the pressure drops again. However, a stuck food particle may prevent the seal.

Introducing cold water will shatter the hot jar due to thermal shock.

The high pressure inside the metal can will strain the seams and the ends of the can may buckle. What is worse is that the seam can be compromised and might not seal itself again, creating a safety risk. Smaller cans are usually not susceptible to this problem but any can from No. 3 (404 x 414) and bigger will buckle due to the large surface area. 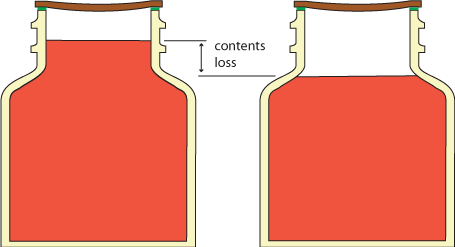 Commercial packers solve this problem by injecting compressed air first, and then introducing cold cooling water. The compressed air maintains the pressure inside of the canner at a level comparable with the pressure inside the container, and cold water lowers the temperature. This simple procedure requires large and expensive canners known as ìretortsî and such equipment is beyond the reach of a hobbyist. However, pressure cooling protects jars from breaking and cans from buckling.

There is a significant difference between commercial and home cooling processes.

Glass Jars. Home pressure canners have no means for injecting compressed air and introducing cold water. There is no other practical solution but to wait for the canner to depressurize by itself, which usually takes 30-45 minutes. Then the jars are taken out and left for cooling. Any short period growth of thermophillic bacteria will not result in any noticeable spoilage, but may decrease the shelf life of the product.

Jars are at a disadvantage as they face a thermal shock. Placing a hot jar in cold water will crack the glass. The glass jars are usually left undisturbed in the air for 12 hours to cool by themselves. However, there is a safety benefit in allowing the glass jars to cool by themselves; this fact is well documented in laboratory research studies. From 930 Bulletin Home Canning Processes for Low Acid Foods:

"These tests show that when foods are home canned in glass jars the long cooling periods required contribute significantly to the lethal value of processes. With vegetables in pint jars the sterilizing value of the cooling period averaged 50% of the total. In quart jars an average of 36 percent of the process value was contributed by the cooling period. In No. 2 and No. 2.5 tin cans the corresponding averages were 15 and 11 percent, respectively. Relatively high values of cooling periods for glass packs not, however, lead to generally shorter processes as compared with packs in tins. The exhaust given the latter before sealing resulted in higher initial temperatures which tended to balance the sterilizing value of the cooling period for processes in glass containers."

Metal Cans. It is possible to cool metal cans when using home pressure canners. Manufacturers specifically prohibit removing regulators from the steam vent pipe to drop the pressure rapidly in order to protect themselves from possible lawsuits. We all know the case when the lady spilled hot coffee over herself at McDonalds, took the company to court and was awarded 20 million dollars. Imagine manufacturers allowing people to remove steam pressure regulators from pressure canners. There will be ten new cases every day. Somehow, 70 years ago, the pressure canners were equipped with pet-cocks and home owners were gradually releasing pressure without injuring themselves. Well, we are a computerized society today, so we cannot handle simple manual tasks anymore.

Cooling procedure from the past: If canning in tin cans - with No. 3 cans, let pressure return to zero, the same as for glass jars, before opening pet-cock. With smaller cans, the pet-cock can be opened gradually without waiting for the canner to cool and pressure return to zero. Open canner as soon as all steam has been released. Take cans out of canner and cool at once in clean, cold water, until luke warm.

If the above procedure was performed and the cans were removed, their ends should be buckled due to the high pressure inside. This testifies that the cans were sealed properly and are tight. As they cool down pressure will fall, a vacuum will form and the lid will become slightly concave. 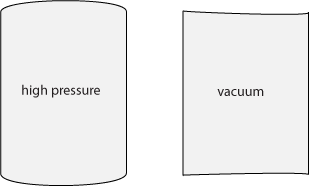 Cooling cans with an air-fan at room temperature is a waste of time as air is such a poor cooling medium. After cooling with water for 60-240 min, commercially produced cans were cooled in 32-42° F (0-6° C) air for at least 12 hours. When the ambient temperature is low (outside), cooling cans in the air will be effective.

Most likely after thermal process, the canner will be left alone to depressurize and then the jars will be removed and placed on a towel in an area without much draft. Then, they will be left overnight to cool, form a vacuum and create a strong seal. Metal cans can follow the same procedure, however, they can be moved around and placed in a drafty area. They are stronger and the seal is well formed by now. There is a considerable advantage in a slow home canning process. The lack of cooling is offset by the additional processing time that the containers are submitted to. The long depressurizing step is nothing else as the additional heating step which starts at 240° F (118° C) and continues to about 160° F (72° C). It corresponds to a temperature range of slow-barbecue and may be considered an extra cooking time. This adds considerable safety to a home canning process.

Summing it up: even though you could depressurize the canner faster, please follow the manufacturers guidelines and wait until the pressure canner depressurizes to "0". However, once the canner is fully depressurized, we don't see any harm in immersing metal cans in cold water to drop the temperature to 95° F (35° C).