Meat smokers and smokehouses need draft. The draft is the sucking action of your smoker, it’s pulling power that allows it to draw air into the fire pit for combustion and then pushes smoke into the smoking chamber. At the same time, it removes gases from the smoker through the exit opening, be it a stovepipe, chimney, or simply a hole in the top cover. In more sophisticated terms it is the pressure difference between the surrounding air of the firebox and the gases in the chimney. The higher the structure, the stronger the draft. Masonry built smokers may include a chimney. However, this is more for looks than practical value because smokers work at rather low temperatures compared to other heating devices, which require more draft.

Although smokers will produce smoke even with very little draft, the importance of this draft cannot be understated. It is needed to suck out moisture and soot laden smoke that remains under the smoker’s cover. Dry wood contains 20 % moisture, and combined with the excess air that enters the smoke chamber and the chimney, we would have to raise the chimney temperature to almost 180° F (82° C) to prevent condensation, which would dry out our meat pieces or sausages. The right amount of draft solves the problem.

Smoking on uneven ground already creates some draft because one end of the pipe will be higher than the other. Factors like chimney height, flue size, altitude, and the wind blowing over the chimney all contribute to the draft effect. Nevertheless, the single most contributing factor is the temperature difference between the outside air and the flue temperature. This is why every smoker or wood stove operates better in cooler winter months than in the warmer days of summer.

Some simple smokers are made from concrete blocks loosely arranged together and the smoke tunnel (about 3 feet long) is on the same level as the smoker. An old potato burlap sack is placed on top to control the smoke. The moment the air is warmed up, it goes straight up, and cold air takes its place creating a natural draft. This works fine for the simplest of the smokers, but once accesories like baffles, supports, smoke sticks, hanging meat, and elbows in a pipe are added to the design, the smoke may need some extra sucking power (draft) to go up the chimney.

Note: draft does not depend on the length of the pipe but on the difference in pressure (height) between the fire pit smoke outlet level and the smoke inlet level in a smoker. A shorter steep pipe can create a stronger draft than a longer one with a smaller angle as shown in a drawing below.

What do we do if our smoker is not pulling out smoke? We could place our fire pit 2’ under ground, but that would require running a connecting pipe or making a trench. In both cases we have to dig and if our construction rests on a concrete surface it looks like a problem. Not really, all we have to do is to add 2’ of a metal pipe of 6” diameter to the top of our smoker and the problem is fixed. Or we can increasing the height of the smoker by laying an additional level of blocks.

In a very simple one-unit smoker, starting a fire is enough to induce the necessary draft.

Increasing draft by adding a section of pipe. 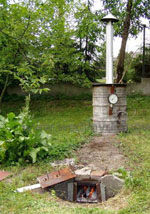 There is plenty of draft here and the pipe disperses smoke into woods. Photo courtesy Abratek

If a metal stove pipe is used as the smoke chimney just by insulating it from the outside temperature we will induce a stronger draft inside of the system. The effect will be most noticeable in the cooler months of fall and winter when draft is always the strongest.

Draft can be increased by:

In the above drawing, pipe B is shorter than pipe A but it has a bigger angle and more draft. For instance, to achieve a 30 degree angle with a 10’ (3m) pipe, the smoker’s base has to be placed 5 ft (1.5 m) higher than the fire pit.

It is possible, however, to achieve a bigger angle and more draft by taking advantage of mountainous terrain.

Controlling smoke draft is of utmost importance when smoking meats. It is accomplished by installing a damper in a stovepipe, installing a smoke stack with a built-in damper, lifting up the smoker’s cover, adding or removing burlap bags, covering open holes in the top cover, or any other means that we have at our disposal.

There isn’t a standard solution because there are so many different smokers. The two main reasons to control smoke are as follows:

A smoker is not a wood stove whose purpose is to warm up the house or boil the water and its temperature expectations run much lower. That also means that there is no need to create an extremely strong draft. Once we start cooking meats inside the smoker and the temperatures are higher, draft becomes much more important. You also need more draft if you intend to burn wood cleanly and efficiently. The easiest device to control draft is a flat damper which is basically a flat piece of metal. This simply slides in and out of a slit in the stove pipe or brick chimney

An adjustable opening is needed in the center of the smoker’s cover to let this moisture out. Any cover will do, even cardboard can be raised an inch or two to let the smoke out. Smoked meats need a supply of fresh air that brings some fresh moisture with it. It also depends on the climate. In dry air, smoking will have a tendency to prematurely dry out the sausage casing. Once it is dry on the outside, it becomes more difficult for the smoke to diffuse into the meat.

A fire pit does not have to be totally sealed and enclosed when smoking. If smoke is coming out of the smoker, that means that the fire pit is doing its job. Once smoking is complete and we decide to continue cooking meats inside the smoker, enclosing and insulating the smoker and fire pit become more important. A little conical shield on top of a smoke exit pipe will give it a nice touch. At the same time it also protects the pipe from rain and also serves as a spark arrester. There is no prefered fixed diameter for a smoke exit pipe but a six inch (15 cm) pipe seems to be the unwritten standard.