Flame and heat protection is a big problem for small smokers since the distance between the fire pit and the hanging meats is so short. That is why smaller smokers must have a safety feature called a “baffle” built into it to prevent this kind of scenario. Most often a baffle is some type of a perforated metal plate that physically separates the fire pit from the smoking chamber.

There are two kinds of baffles:

A safety baffle, commonly used in one unit smokers, is a perforated metal plate that separates the firepit from the meat compartment and its main purpose is preventing flames from reaching the smoke chamber. Better designs advocate the use of two or three baffle plates separated by 3 - 4 inches, though that complicates the smokers construction and steals the valuable space.

Baffles are a very important design feature of any small smoker with a firepit located in its bottom part as they safeguard products from flames and wild jumps of temperature. They provide a piece of mind when smoking making the entire process more organized and controlable and they also help to disperse smoke slowly and evenly to all parts of the smoking chamber. If a smoker is connected by a pipe with a separately standing fire pit, the baffles are not necessary.

Meat hangs in different sections of the chamber but the smoke pouring out of the pipe, or the one raising up from the fire pit is using the path with the least resistance and that means it is rushing straight up. A baffle puts some brakes on the smoke forcing it to slow down and disperse evenly in all sections of the drum. During cooking the baffles will slow down the heat escaping straight up and the design of the smoker will be more efficient.

A baffle is a perforated metal plate, rectangular or round, of about 1/8” (3 mm) thickness or more, strong enough to support the weight of river gravel or another baffle. Its diameter should be about 2” (5 cm) smaller than the diameter inside of a barrel to facilitate removal for cleaning. The holes between ½ - 1” ( 12 – 25 mm) diameter should be drilled at random so if the two baffles are used, there will be some offset between holes for better smoke distribution.

Overlapping plates baffle. You may use two solid 1/8” overlapping plates and the size should correspond to about 60 % of the depth of the smoking chamber. The top one should be 4” higher than the bottom one and will overlap it by 4”.

Gravel baffle. One of the easiest, most effective baffles can be made by placing medium size river gravel on a suitable screen. Gravel baffle placed on top of smoke delivery pipe. 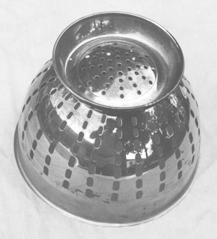 Collander makes a great smoke disperser/baffle and can be found in every kitchen. 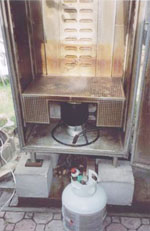 The photo shows a very functional although not a typical baffle. This stainless steel enclosure with hundreds of holes creates a formidable safety screen for any possible flames from below. The smoker has also a separate fire pit that is connected by a 6" steel pipe. Its outlet is visible under gas burner that is used for cooking only.