Cabbage has been fermented in many areas of the world. Cabbage in all of its forms has always been popular in Europe and we find cabbage soup, stuffed cabbage with meat and rice, or sauerkraut with meat and potatoes. It tastes great when served with a grilled sausage and you can find street carts that serve hotdogs with sauerkraut in the USA as well. Early German immigrants introduced cabbage and traditional sauerkraut recipes into the United States. As a result German soldiers and people of German descent were often referred to as "krauts." Cabbage belongs to the food family traditionally known as cruciferous vegetables and is related to kale, broccoli, collards and Brussel sprouts.

There are five major cabbage varieties:

1. Western cabbage white, scientific name: Brassica oleracea (Capitata Group), this variety is used for making German or Eastern European sauerkraut. Western white cabbage is also called green cabbage or Dutch White. The color of green cabbage ranges from pale to dark green. Both green and red cabbage have smooth-textured leaves. It is difficult to pinpoint the exact origin of the headed cabbage that we know today, but we know that the cultivation of cabbage spread across northern Europe into Germany, Poland and Russia, where it became a very popular vegetable. 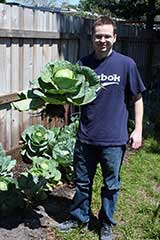 2. Western cabbage red, scientific name: Brassica oleracea (Capitata Group), has leaves that are either crimson or purple with white veins running through it. Red cabbage tastes just like green cabbage, so your choice between them depends largely on which color you prefer. The product of red cabbage fermentation is known as red kraut or blue kraut after preparation. Keep in mind that red cabbage tends to bleed and discolor surrounding foods. Red cabbage is sweeter and contains more nutrients than other cabbage types. Red and green cabbage have a stronger flavor and crunchy texture as compared to Savoy and napa cabbages.

3. Savoy cabbage, scientific name: Brassica oleracea (Capitata Group), a flavorful crinkled leaf cabbage, is one of the best varieties for cooking. Its head consists of loose leaves, which vary in color from dark green to light green containing lacy patterned veins. It goes well with red wine, apples, spices, horseradish and meat. Savoy cabbage is like ordinary cabbage, but with a milder flavor. The leaves of Savoy cabbage are more ruffled and yellowish-green in color.

A variety of the savoy cabbage is the January King Cabbage. The January King was a favorite variety in Victorian times and is still considered in England to be the finest cabbage of them all. January King is not quite a savoy, and not quite as smooth as Western cabbage; not quite red and not quite green; it combines the most attractive features of all those cabbages. This is a hardy winter cabbage, not even severe frost seems to bother it. The heads are crisp and crunchy and with good flavor, the leaf is a conifer-blue color.

4. Chinese cabbage, has a milder flavor, more delicate texture and contains more water. This cabbage comes in two distinct varieties, both related to the Western cabbage:

A. Chinese cabbage, (pe-tsai), scientific name: Brassica rapa (Pekinensis Group), also known as Napa cabbage, have broad green leaves with white petioles, tightly wrapped in a cylindrical formation and usually forming a compact head. Napa cabbage is lighter in color than bok choy, which is also sometimes called Chinese cabbage. Napa cabbage is widely used in China, Japan, and Korea and is also readily found in many North American, European and Australian cities. The flavor of napa cabbage is described as delicate compared to bok choy or Western cabbage, and it can be used in stir-fry with other ingredients.

B. Chinese bok choy cabbage, (pak-choi), scientific name: Brassisa rapa (Chinensis Group), Chinensis varieties do not form heads; instead, they have smooth, dark green leaf blades forming a cluster reminiscent of mustard or celery. Bok-choy has a mild flavor and a higher concentration of vitamin A. Both Chinese cabbage varieties are great to use in salads.

Sturdy, abundant, and inexpensive to grow, cabbage is a dietary staple widely cultivated all over the world. It stores so well that it is available throughout the year. However, it is at its best during the late fall and winter months when it is in season. Cabbage is a winter vegetable and the peak season for most cabbages runs from November through April. Fresh whole cabbage will keep in the refrigerator for one to six weeks depending on the type and variety. Hard green, white or red cabbages will keep the longest while the more delicate Savoy and Chinese varieties should be used more quickly. Fermented cabbage will easily last 6 months when kept in a cool room. The inner leaves of the head cabbage are protected from the sunlight by the surrounding leaves and they are lighter in color. Packaged freshly shredded cabbage and carrots are available in every supermarket and need no introduction, this is a coleslaw salad. The recipe can be elaborated on and shredded red and green cabbage can be combined with fresh lemon juice, olive oil, turmeric, cumin, coriander, and black pepper to make coleslaw in Indian style.

Cabbage is the physician of the poor.

Cabbage is one of the best vegetables there is. It is credited with providing the following benefits:

In the past fresh and fermented cabbage were used for medicinal purposes. Fresh cabbage leaves were applied externally to wounds and infections and sauerkraut and sauerkraut juice were taken internally. It was a well known fact that drinking sauerkraut juice was an effective remedy to remove all kinds of worms (roundworms, tapeworms and others) from the system for good. Cabbage and sauerkraut are rediscovered again and there is an abundance of information on the Internet about the great benefits of a diet that includes this vegetable.