Low-acid foods such as meat, poultry, fish and vegetables must be processed at 240-250° F (116-121° C) temperatures to kill Clostridium botulinum spores. Low-acid foods means any foods, other than alcoholic beverages, with a finished equilibrium pH greater than 4.6 and a water activity (Aw) greater than 0.85. Tomatoes and tomato products having a finished equilibrium pH less than 4.7 are not classified as low-acid foods. In an open kettle at sea level, water boils at 212° F (100° C) which is insufficient for destroying Cl.botulinum spores. At increased pressures water boils at higher temperatures, hence the need for a pressure canner. Developing the processing time for a food product to be canned is a complex and expensive process. It depends on:

In the past, the USDA working with the National Canners Association conducted thermal processing studies for different foods. To determine a processing time for each food, bacteria which were more heat resistant than Clostridium botulinum were introduced into sample jars. The test organism was putrefactive anaerobe No. 3679, isolated by Cameron in 1927 in the laboratories of the National Canners Association. The spores of the organism exhibit a resistance to heat almost twice the maximum resistance reported for Cl. botulinum under the same conditions. The jars were heated for different times, then they were held and tested for spoilage. At each temperature and processing time the reading was taken when bacteria started to die. The results of the tests were plotted on a graph where a single curve called Thermal Death Time displays the findings. The calculated times were verified by actual tests with jars inoculated with known quantities of bacteria. A margin of safety was introduced and the processing time and temperature for a particular food in a given jar was established. The United States Department of Agriculture Information Bulletin No. 539 lists detailed processing times for a great variety of foods.

The table below demonstrates the importance of time-temperature combinations for killing bacteria. The information comes from Putra University, Malaysia: From thermal death curves, the following time/temperature treatments yield the same microbe killing effect: 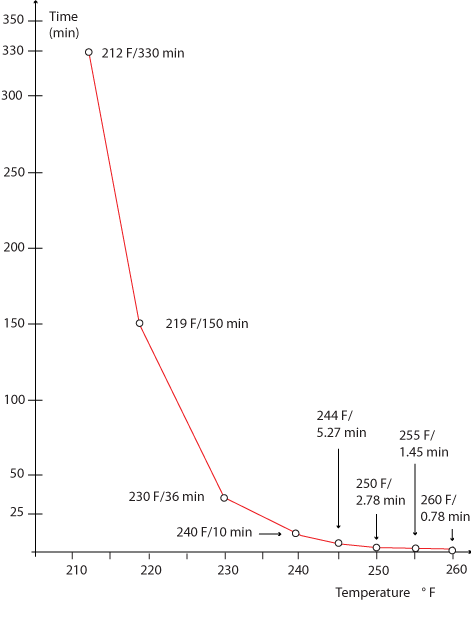 Heat is transferred from the outside of the jar/can to the interior of the solid canned food through conduction. This is a slow method as the heat is transferred by molecule-to-molecule transfer. Meats, poultry, fish, potatoes and beets are heated by conduction. The last portion heated, the so called "cold spot" is usually the geometric center of the container. 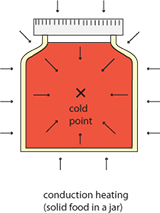 Transfer of heat in solid food in a jar during steam processing. 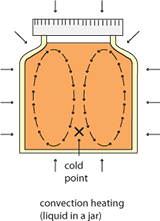 Transfer of heat in liquid or semi-liquid food in a jar during steam processing.

Heat transfer in liquids is by convection. The convection method is faster as the heat is transferred by the moving currents of liquid itself. Meat broth or soup with a few solid pieces will heat much faster than a broth with solid chunks of meat. Therefore, where possible, it is important to have the food in smaller cuts and surrounded by liquid to allow these currents.

In liquid or semi-liquid foods the critical thermal point (cold point) is located about 1/3 of the height from the bottom of the container. A smoked sausage can be baked in a smokehouse to a safe internal meat temperature by raising the temperature to about 176-190° F, 80-88° C, which is a slow process. The same sausage immersed in hot water 176° F, 80° C will cook much faster as water conducts heat much faster than air. For that reason, the majority of processed meats are cooked in water. To take advantage of the shorter heating times of the convection method, liquid is added to solid chunks of food and a combination method (conduction-convection) is created. Liquid convection currents supply heat to solid food where the heat is transferred by a conduction method (molecule heat transfer). Heat penetration into meat and poultry is accomplished principally by conduction, with convection playing a lesser role. However, when products are packed in brine, broth or other liquid, convection heating plays a bigger role. There are many cans on the market and they come in different shapes and sizes. A good understanding of the subject of heat transfer will make can selecting much easier.

Three cans with the same diameter, but different height. It takes longer for the heat to reach the "cold point" of the highest can than the lowest can.

The capacities of all cans are equal, however, the heat will penetrate faster to the cold point of flat cans "a" and "b" than to the square can "c."

It is quite obvious that heat transfer will be the fastest in the smallest jar.

Home and commercial canning equipment and methods differ greatly. Slower heating and cooling times with home equipment account for the greatest difference. Canning recipes for homeowners are designed with safety in mind, taking under consideration that a hobbyist works without supervision from food inspectors.

The efficiency of heat transfer in containers depends on: