Meat smokers and smokehouses are used to smoke products like meat, sausages, poultry or fish. The properly designed meat smoker must:

This last cooking requirement can be performed outside of a smoker by poaching meat in hot water or baking it in the oven. The sophistication of the device is unimportant; smoke can be created in both a 55-gallon drum smoker and a home made box. Some meats are cooked in a smoker to make them ready to eat, while some will only receive a smoky flavor and will be taken out for prolonged periods of air-drying.

The design of a smoker remains relatively easy unless cooking meats or sausages to the ready to eat temperature is a requirement. But why cook a sausage in a smoker? This task can be accomplished much faster and more easily by heating the sausage in water. Baking in an oven is also an option as long as the temperature can be kept as low as 170° F (76° C). Heating sausages in water is not a trick or shortcut, but an acceptable and even proper way of preparing sausages for centuries. Boiled ham can be found in every supermarket. If we boil the best hams in the world, then why not sausage? Well, we do, some of the best sausages from Europe are first smoked in a smoker, and then finished by poaching them in water at about 176° F (80° C).

Keep in mind that we don’t use the word “boil” when heating meat inside a pot full of water. We use “heat” to stress the fact that the water must be kept at 158°-176° F (70°-90° C), and not at its boiling point, which is 212° F (100° C). You could bring home smoked meats (not cooked yet) and place them directly in a freezer. Then later, when needed, they can be thawed and poached in water. When smoking meats with a separate fire pit/smoke generator, we have more time to enjoy ourselves because we don’t have to check the temperature so often. If the plan is to eat the sausage within a matter of days, it doesn’t make much of a difference whether we smoke with cold, warm, or hot smoke.

However, we are playing a completely different game if we use the smoker to smoke and cook the meat. Now outside temperatures become important factors. The smoker may need some insulation to maintain appropriate temperatures, especially during the colder months. Holding internal temperatures of 152° – 160° F (67°-72° C) can be difficult in cold climates when the smoker is situated outside. Maintaining temperatures by burning wood in a 55 gallon metal drum is a hit or miss proposition. The best solution, which is incidentally used in commercial smokers, is to rely less on the smoke generator or fire pit as our only heating source, but to install a second independent heat source.

The heating process is now shared by two separate components:

By using two components we can produce a quality product in any climate. A metal drum, unless insulated, is still a poor choice in hard winters, but anything built with brick or thick wood is fine.

It should be noted that the whole design changes drastically when there is a supply of electricity. With a stand-alone fire pit, we can use a barbecue starter wire for heating wood chips or sawdust until they start producing smoke. Inside the smoker we can place an electric heating element to supply heat with a turn of the dial. By adding a thermostat to the arrangement, we can preset the temperature of a smoker. A gas burner can also be used as a source of heat.

Every smoker, no matter how simple or sophisticated, consists of the following parts:

The most important parts are the smoke generator (fire pit) and smoke chamber. They could be part of the same unit or they could stand separately. For example, a drum smoker can be placed over a fire pit or it can be placed on a lower level connected by a metal pipe with a separate fire pit to aid smoke flow.

Smoker with a fire pit inside (one unit smoker)

Using firewood to slowly bring the temperature to 170° F (76° C) and maintain it at that level for about 30 minutes is extremely difficult. Irregular sizes of wood need to be constantly added on. One moment of negligence and the temperature soars over 200° F. Without a safety baffle, this can be disastrous for a smoker. All the fat inside the sausage will melt, leak through the casings, and drop on the small flames in the fire pit below. These little flames will not be little anymore. If left unattended, a small controlled flame will turn into a raging fire. The sausage casings will become so dry and brittle that the sausages themselves will fall down into the fire pit.

Note when we use wood to burn an open fire we assume that the flames are not very long. The reason they are short is that they are cooled by the air above. Once the temperature in a closed firebox goes up the flames  will also become longer providing there is a supply of fresh air. For example in a well designed masonry heater the temperature can reach 1800° F (1000° C) and the flames may reach 5' in length. 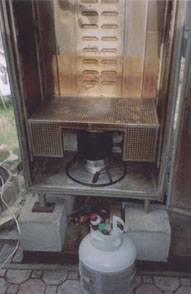 Flame and heat protection  is a big problem for small smokers since the distance between the fire pit and the hanging meats is so short. That is why smaller smokers must have a safety feature called a “baffle” built into it to prevent this kind of scenario. Most often a baffle is some type of a perforated metal plate that physically separates the fire pit from the smoking chamber. One of the best baffles is river gravel placed on any suitable screen.

Left drawing shows a very functional although not a typical baffle. This stainless steel enclosure with hundreds of holes creates a formidable safety screen for any possible flames from below. The smoker has also a separate fire pit that is connected by a 6" steel pipe. Its outlet is visible under gas burner that is used for cooking only.

Smaller factory made smokers also employ smoke generating unit inside and some protection is needed like a baffle or a flame/heat shield. 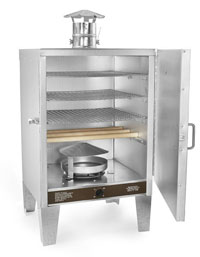 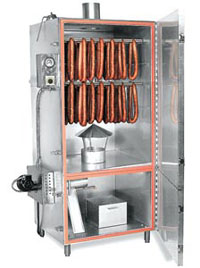 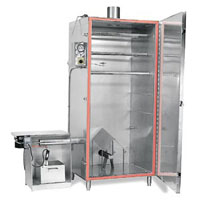 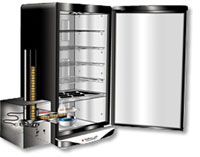 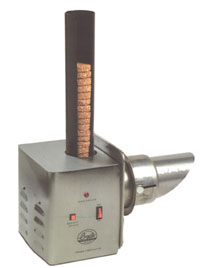 There is a small smoker made by Bradley Technologies with a separate smoke generator that employs an original way of producing smoke. Prefabricated blocks of wood (flavor bisquettes) are fed vertically into the smoke generator unit and one by one burn there generating smoke. The smoke generator has a short pipe that fits into the smoking chamber. A nice unit but there is a catch....you are dependent on the company or its distributors to deliver bisquettes which come in different flavors (hickory, apple, alder and others).

Smoker with a separate smoke generator

To prevent flames and fully utilize the little space small smokers have at their disposal, a separate smoke generator should be used. The smoker should stand on some sort of base, either a pipe or dug out soil trench, and enter the bottom of the smoker. The popular 55-gallon metal drum looks especially nice when standing on a round base. 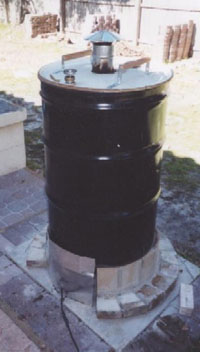 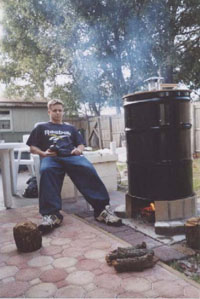 The same smoker burning firewood. The smoker is working great but now it requires much more  attention.

The benefits of of a separate smoke generator are numerous: 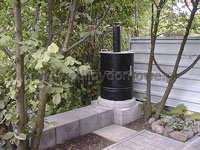 Using free standing smoke generator/fire pit we don't have to worry about flames. Don't let  looks of those barrels fool you-those smokers are capable of producing the highest quality products. They can be simple common drums or expensive masonry types with all kinds of bells and whistles. The design of a great smoker has remained the same for centuries -  two separate parts: smoker and a fire pit/smoke generator.

In industrial smokehouses steam, water spraying, and other microprocessor controlled functions take care of the entire smoking and cooking operations.The smoke generator is a separate unit standing outside of the smoker and is connected to it with a pipe. Electric blowers blow the smoke inside of the unit. Any small heat fluctuation coming from the smoke generator will not have much effect on the temperature inside the smoking chamber. This gives us more freedom because there is no need to open the smoker’s door (or top cover) to check the smoke flow.

Different methods are used to generate smoke in commercial smokehouses. A widely used technique is to pyrolyze hardwood chips or sawdust. Wood pieces are fed into a gas or electrically heated metal surface at 662° –752° F (350°-400° C).

With other methods, a block of wood is pushed against rotating a metal wheel and temperatures become high enough for the wood to start smoking. Electrical blowers push the smoke into ducts leading into the smokehouse. 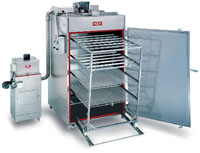