The Making of Kimchi

At the first glance, making Kimchi seems to be a very complicated process which is even compounded by the variety of materials that are used. On the other hand it is easier to come up with a Kimchi recipe, as there are so many of them as each region in Korea has its own. There are so many vegetables and ingredients that go into Kimchi, that it may be more correct to think of Kimchi as a Korean way of preparing vegetables and not as of a particular dish.

Some Kimchi are fermented for 2 weeks, some for 3 days, and some are consumed the moment they have been made. Some are thick and some are watery that look like a soup. Most Kimchis are made with Chinese cabbage, however, this is not set in stone and many are made without it. They can be made with white radish or turnip only. Filler materials vary as well, pickled baby shrimp, fresh shrimp, fresh oysters, squid, different types of mushrooms, Korean pear, seaweed, nuts, the list is endless. That offers a lot of freedom to a cook, who can let his imagination run wild, improvising and creating new Kimchis. However, certain ingredients such as garlic, ginger, scallions, and red pepper flakes or powder are nearly always added. However, there is a white kimchi, which does not include red peppers.

Kimchi can be made from 1/2 cabbage, 1/4 cabbage or the cabbage can be sliced across. Half cabbage is usually stuffed with filling and the leaves must be softened up first, which is accomplished by soaking the cabbage in brine.

The process of making whole cabbage Kimchi can be divided into a few phases:

1. Chinese cabbage is cut in a peculiar way. Discard any poor quality outer leaves and cut off as much of the root as possible. Save better leaves for later. Cut through the bottom of the cabbage to the half-way point, then split the head into separate halves. This cutting method preserves the texture of the internal leaves.

Cutting through the root.

Most kimchis are consumed in a few days so the cabbage needs to be softened, what is accomplished by salting it and placing aside for one night. The following day the cabbage is rinsed well and the excess water is drained away. Another faster method is to immerse cabbage for 3-4 hours in a brine that is made by dissolving 3 cups of salt (864 g) in 4 quarts (~ 4 liters) of water. This makes 70∞ SAL (salometer reading) brine, which is quite strong. Making a weaker brine will increase the brining time and the cabbage will release too many valuable nutrients into the brine. The purpose of brining cabbage is to make it soft and pliable and not to make it salty. Salt will be added during mixing ingredients.

2. Korean red pepper powder is very mild comparing to fiercely hot cayenne peppers. You can add 0.75 ounce (21 g) to 1 kg (2.2 lb) of cabbage. Make paste by mixing red pepper powder with a small amount of water. You can soak pepper in the salted anchovy or shrimp juice, this will add an extra flavor. Coat white radish strips with red pepper paste, then add all other vegetables, salt and ingredients such as shrimp or oysters. Mix everything together. This is the stuffing.

3. The cabbage is ready for stuffing. The filling is evenly placed between each leaf of cabbage. In order to keep all of the filling securely in the cabbage, the entire cabbage is wrapped with an outermost leaf and allowed to ferment for about 3-7 days.

While holding back the leaves, place the filling between the leaves.

Wrap the middle of the cabbage with the outer leaves. This protects the stuffing from falling out.

Stack stuffed cabbages in a suitable container. Try to avoid any large pockets of air. Salt the outer leaves which were removed earlier and cover the stuffed cabbage. Add any residual juice and brine that may remain over. Press hard on cabbages to release any trapped air, sprinkle salt over the cabbage leaves and place a weight on top. Napa cabbage is a great juice producer so the next day the cabbage should be immersed in brine.

Stuffed cabbages in a glass jar. 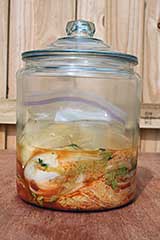 Stuffed cabbages in a glass jar, 24 hours later. Note the amount of brine.