Genuine Fermented Dill Pickles are the best known type of fermented cucumbers which are made by home and commercial producers. They are made with fresh cucumbers, salt, and spices. They are fermented in low salt brines, usually 5% or lower. Pickles fermented in low salt brines taste best but spoil sometimes and may have to be discarded. To avoid this risk commercial producers like to add some vinegar into the brine.

Fermented pickles owe their complex taste and flavor to the action of bacteria. The speed of the process is greatly influenced by the fermentation temperature and strength of the brine. The basic process has not changed much and the best genuine dill pickles are made using the same methods that were employed in the past. Poorly developed cucumbers may cause hollow pickles. Fermented pickles will usually be softer than fresh-pack pickles, but if fermented ones become too soft you probably did not remove all cucumber blossoms before you started to brine the cucumbers. Or, you may not have removed all the slime from the top of the brine as the cucumber fermented.

Cucumbers follow a lactic acid fermentation pattern similar to sauerkraut. Cucumbers are placed in the brine ensuring that none float on the surface. In the presence of air, the exposed cucumbers will react with yeasts and molds and white scum may develop. The salt in brine draws sugar and water out of cucumbers. As the cucumber contains around 90% water, a significant amount of cucumber water will mix with the brine making it weaker. Commercial producers readjust brine strength by adding more salt when needed. During fermentation cucumbers absorb salt. Due to this gradual absorption of salt, cucumbers become heavier and they start to sink. In two days they soften and the brine solution starts fermenting. Salt inhibits the growth of undesirable bacteria but lactic acid bacteria multiply and start consuming sugar which cucumbers contain inside. They break sugar into lactic acid, acetic acid and carbon dioxide gas (soda gas). If you are using a clear jar, you will see bubbles rising inside. The color changes from bright green to olive or yellow-green as acids react with the chlorophyll (a green pigment found in almost all plants). The tissue changes from solid white to translucent as air is forced out of the cells.

At the beginning of fermentation brine becomes cloudy due to bacteria growth and gas production. Brine may become clearer or remain cloudy which does not affect pickle quality in any way. It may not look visually pleasing but keep in mind that this cloudy brine contains all those complex flavors that are the product of fermentation. For better looks this brine could be filtered or replaced with a fresh clean brine of similar strength, but the wonderful flavor of the original brine will be gone. 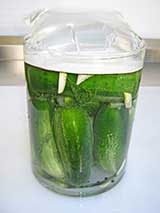 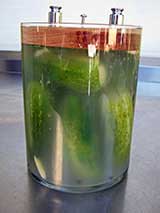 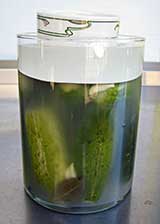 Cucumber color. As the fermentation progresses the texture of cucumber changes from opaque white to translucent. White areas signify incomplete fermentation. The photo depicts pickles which have been in brine for four days.

A cloudy brine or a white sediment may indicate the use of table salt rather than pickling salt. Table salt contains an anti-caking ingredient. Or it could also be that yeast has developed and settled to the bottom of the jar.

In most cases it is the result of a normal reaction during fermentation caused by the bacteria which produce fermentation. A small amount of white sediment is normal in a jar of firm pickles. However, if the pickles are soft, slippery or slimy, they may be spoiled so don't use them. You can eat partly fermented pickles after 3-4 days. They will still be deep green color, but the color will start turning olive green. After about three weeks, the cucumber flesh will become a translucent olive green. At this point, you can store them in a refrigerator or can them in jars. Cover with boiling hot brine that they were fermented in, and process pint jars for 10 minutes and quart jars for 15 minutes in a boiling water bath canner, if you live at altitudes below 1,000 feet.

Save some of the fermented cucumber juice as this is an excellent starter culture for the next production. Some claim, it is a great hangover cure. Strain the juice and pour it into dark bottles all the way to the top. This juice contains all minerals, vitamins and nutrients that lactic acid producing bacteria need to start a successful fermentation.

Cucumbers ferment similarly to sauerkraut and for best results Leuconostoc mesenteroides bacteria should initiate fermentation. This calls for 64-72° F (18-22° C) temperature. Then Lactobacillus plantarum will take over the fermentation process. At those temperatures fermentation is accomplished in about 10 days. Then the container may be moved to a cooler place. If you like the taste of partly fermented pickles give them a try them after a few days of fermentation. Their taste will be somewhere in the middle between a fresh cucumber and fermented one. Pickles will continue to ferment but if you are satisfied with the taste, stop the fermentation by placing the container in a refrigerator.