Meat of a healthy animal is clean and contains very few bacteria. Any invading bacteria will be destroyed by the animal’s immune system. Once the animal is slaughtered these defense mechanisms are destroyed and the meat tissue is subjected to rapid decay. Although unaware of the process, early sausage makers knew that once the animal was killed, it was a race between external preservation techniques and the decomposition of the raw meats to decide the ultimate fate of the issue.

Most bacteria are present on the skin and in the intestines. In a stressed animal bacteria are able to travel from the animal’s gut right through the casing into the meat. The slaughtering process starts introducing bacteria into the exposed surfaces. Given time they will find their way inside anyhow, but the real trouble starts when we create a new surface cut with a knife. This creates an opening for bacteria to enter the meat from the outside and start spoiling it. We must realize that they don’t appear in some magical way inside of the meat, they always start from the outside and they work their way in.

A. Cube A is 1 inch on each side and has a volume of 1 cubic inch and the surface area of 6 square inches.

B. Three complete cuts (two vertical and one horizontal) produce eight small cubes with a volume of 0.125 cubic inch. Total volume remains the same - 1 cubic inch, but total surface area has doubled and is 12 square inches. This is what happens when the meat is cut, the surface area increases. 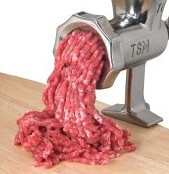 Now imagine what happens when the grinder cuts meat through a 1/8” (3 mm) plate, it creates an infinite number of small particles. The more cuts, the more spoils of meat, the more air and free water available to bacteria. This is the reason why ground meat has the shortest shelf life.

In a large piece of meat the outside surface serves as a natural barrier preventing access to bacteria. They have a long distance to travel to reach the center of the meat. Meat muscles are surrounded with a connective tissue which also acts as a protective sheath and so does the outside skin. Duties like cutting meat, grinding, mixing or stuffing all increase meat temperature and should be performed in the kitchen at the lowest possible temperatures as fast as possible. Otherwise we create conditions for the growth of bacteria and that will decrease the shelf life of the product.

Food safety is nothing else but the control of bacteria and to do it effectively first we have to learn how bacteria behave. Once one knows what bacteria like or dislike, it will be very simple to produce safe products with a long shelf life. Let’s make something clear: it is impossible to eliminate bacteria altogether, life on the planet will come to a halt. They are everywhere: on the floor, on walls, in the air, on our hands and all they need to grow is moisture, nutrients and warm temperature. Given ideal conditions bacteria can double up in numbers every 20 minutes. In a refrigerator their number will also grow slower, but they can still double up in 12 hours. At room temperatures bacteria will grow anywhere they have access to nutrients and moisture. Short of deep freezing, it is impossible to prevent bacteria from spoiling meat, all we can do is to create conditions that will slow down their growing rate. The following three factors allow us to control the growth of bacteria and directly influence the safety of meat products:

Storing and processing the freshest meat at low temperatures is the strongest weapon that we have to fight bacteria. Additional factors such as adding salt, nitrite, increasing meat's acidity, eliminating moisture, vacuum packing and others are additional safety measures that help to produce a safe product with the maximum shelf life. Nevertheless the single most important factor is using the lowest practical temperatures for processing and storing meat. When you answer the telephone and leave ground meat on the kitchen table for 3 hours it will not matter much, as long as you only make one or two pounds of sausage. It will be consummed in a day or two and there will not be enough time for the meat to go bad. But if you buy a 50 lbs box of pork butts to make different sausages for your family at Christmas, now it is a different matter. You can not eat all that meat in a day or two. Some of it will hang in the kitchen, some will be in a refrigerator, a good half will go into the freezer. It is in your own interest to have those sausages last as long as possible and now all those low temperatures and good manufacturing techniques will come into play. 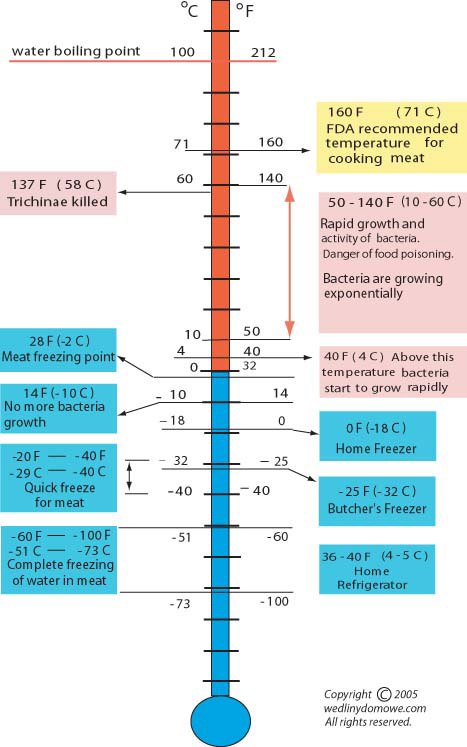 Effects of Time and Temperature on Bacteria Growth

Under the correct conditions, spoilage bacteria reproduce rapidly and the populations can grow very large. Temperature and time are the factors that affect bacterial growth the most. Below 45° F bacteria grow slowly and at temperatures above 140° F they start to die. In the so called “danger zone” between 40-140° F (4-60° C) many bacteria grow very well. Most bacteria will grow exponentially at temperatures between 70° F and 120° F. When bacteria grow, they increase in numbers, not in size. Let’s see how fast bacteria grow at ideal temperature:

Now it becomes evident what happens to a piece of meat left out on the kitchen table for many hours on a beautiful and hot summer day. The thermometer drawing that follows below has been compiled from the data we found at the College of Agriculture, Auburn University, Alabama. It shows the time that is required for one bacteria cell to become two at different storage temperatures. Looking at the drawing we can see that once the temperature rises above 50° F (10° C), bacteria will double up every time we raise the temperature by about 5° F. From the above examples we can draw a logical conclusion that if we want to process meats we should perform these tasks at temperatures not higher than 50° F (10° C). And those are the temperatures present in meat processing plants. You might say that lowering the temperature of the room will be better still. Of course it will be better, but people working in such conditions for 8 hours a day will find it very uncomfortable.

It can be seen that at 32° F (0° C) bacteria needs as much as 38 hours to divide in two. That also means that if our piece of meat had a certain amount of bacteria on its surface, after 38 hours of lying in a refrigerator the amount of bacteria in the same piece of meat will double. If we move this meat from the refrigerator to a room having a temperature of 80° F (26.5° C) the bacteria will double up every hour (12 times faster). At 90° F (32° C) they will be dividing every 30 minutes.

After cooking, meats are free of bacteria, but leaving them warm for an extended time will invite new bacteria to settle in and start growing. For this rea­son smoked and subsequently cooked meats are submitted to cold showers to pass through the “danger zone” as fast as possible.

Good Manufacturing Practices to Apply in the Everyday Kitchen

Home made meats and sausages are subject to the ambient temperature of the kitchen and a dose of common sense is of invaluable help:

The presented above measures increase our defense against the growth of bacteria and by implementing those simple recommendations we greatly increase our chances for producing quality meats and sausages.