Fish must be of good quality, plump, firm and of a pleasant smell. Fresh fish is the best material, however, frozen fish is acceptable. A quality product cannot be made from stale fish; heavy smoking may disguise the bad quality to some extent, but only for a day or two. Frozen fish can be used for smoking, however, freezing fish will not improve its quality, we can only hope to match the quality of the fresh material. 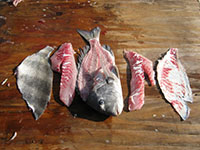 All fish may be smoked, but the fat fish absorb smoke better, stay moister during smoking and taste better. This does not mean that lean fish cannot be smoked, the best example are million pounds of haddock that have been smoked in England.

A great amount of fat is found under the skin along the lateral line where the flesh is much darker (see the arrows). Removing some of this flesh will decrease the fishy flavor of the fish.

Meat color is determined largely by the amount of myoglobin a particular animal carries. The more myoglobin the darker the meat. To some extent oxygen use can be related to the animal’s general level of activity; muscles that are exercised frequently such as the legs need more oxygen. As a result they develop a darker color unlike the breast which is white due to little exercise. Fish float in water and need less muscle energy to support their skeletons.

Most fish meat is white, with some red meat around the fins, tail, and the more active parts of the fish which are used for swimming. Most fish don’t have myoglobin at all. There are some antarctic cold water fish that have myoglobin, but it is confined to the hearts only (flesh of the fish remains white but the heart is of a rosy color). The pink color of some fish, such as salmon and trout, is due to astaxanthin, a naturally occurring pigment in the crustaceans they eat. Most salmon we buy is farm raised and as it is fed a prepared commercial diet that even includes antibiotics, its meat is anything but pink. The only reason that farmed raised salmon flesh is pink is that canthaxanthin (colorant) is added to the food the fish eats.

The pink color of smoked meat is due to the nitrite reaction with myoglobin. As most of the fish don’t have myoglobin the meat is not going to be pink even if cured with nitrite and that explains why very few fish recipes include cure. Some red- flesh fish such as mackerel or jack may have dark muscles that will become blackish-red after processing. Such fish will benefit from curing them with salt and sodium nitrite (cure #1) to preserve their red color. In addition, nitrites are not allowed in all species of fish used for smoking. The Food and Drug Administration currently allows nitrites to be used in salmon, sablefish, shad, chubs, and tuna. Why out of millions of species of fish swimming in the ocean, only five species can be cured with nitrite? What made those fish so special? A letter of inquiry was sent to the Food Safety and Inspection Service and this was the answer:

Sodium nitrite is used in Japan to preserve red color of dark flesh fish such as tuna and bonito which are processed for sausages. If not treated with nitrite, the red color changes to blackish red after heat treatment. To prevent this the meat is cured with 3-4% salt and 0.1 g sodium nitrite.