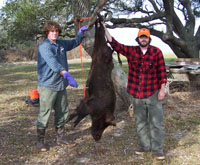 The definition of wild game covers large animals such as dear, elk, moose, bear, mountain goat, and smaller animals such as squirrel, rabbit, opossum, and wild birds. Meat from wild animals is very lean, darker in color, and often has a gamey flavor which some people find objectionable. Fat is known to carry a lot of this flavor and as much of the fat as possible should be cut away. As the game meat contains very little fat to begin with, it is understood that smoking and cooking will produce a very dry product. The solution is to lace meat with pork back fat, add pork fat into sausages, cover smaller meat pieces with bacon strips or baste meat with marinade often. All meats will benefit from applying wet cure. The brine will not only tenderize the meat but will also remove any unpleasant gamey odors. If smoking meats at low temperatures, use sodium nitrite (Cure #1). You don’t need nitrite when meats are smoked/cooked above 170° F (77° C).

Commercial meat is chilled rapidly but a game animal such as deer is often kept at higher than recommended temperatures which creates better conditions for the growth of bacteria. The safety of the meat can be affected by the wound location (spilling gut’s content) and the processing skills of the hunter. If the animal is wounded or cut during slaughtering in such a way that the contents of its gut come in contact with the meat or hands of the operator, fecal bacteria can contaminate the meat.

Note that wild game such as deer and bear are often infected with the trichinae parasite which is destroyed at 137° F (58° C). If present in pork, this parasite may also be destroyed by keeping meat frozen for a certain time (explained in the chapter on food safety). Latest research has demonstrated that meat coming from wild animals living in cold climates is resilient to cold treatment for trichinae and the only way to be safe is to cook the meat to 160° F (71° C) internal meat temperature. The questions about game meat condition are hard to answer unless the hunter processes the meat himself. Meat processors engaged in commercial production of wild game will have the meat inspected by the meat inspector.

The sooner the animal is dressed after shooting, the better quality of the meat will be. If the weather is hot, the skin removal will facilitate cooling. The deer will have to be inserted into cheese cloth and protected from flies. This can be accomplished with some black pepper. If the weather is cold, it is better to leave the skin on what will prevent meat from excessive drying and will keep the carcass clean.

All animals generally follow the above curve, of course each one differently. Aging times for poultry are not in days but in hours only. After 14 days most large animals will heave perfectly aged meat. Young animals are tender by nature and a suckling pig or veal don’t have to be aged. Operations like chopping or mechanically grinding tenderize meat and hunters who grind their meat don’t have to worry about aging it. Game which is killed at 65° F (18° C) or above and held at this temperature over one day should be processes immediately. By the time this meat is brought back from the hunt, the aging is completed. The same meat will have to be aged for 2 weeks at 34° F (2° C). The best way to preserve wild game is by freezing. Freeze and store game meat at 0° F (-18° C) or lower. Such frozen meat will keep up to one year without loss of quality.

Large animals will be butchered into smaller cuts, noble cuts such as loins will be barbecued. Tougher cuts from older animals may be stewed. Other cuts may be frozen for later use. If no freezer is available, they can be preserved by careful application of preservation methods. If large cuts are to be smoked with preservation in mind, use the dry cure method, rub salt, sugar and Cure #1 into the meat.

Small game parts require about 6-10 hours of curing, whole squirrel about 24 hours, and rabbit 24-36 hours. After curing rinse meats with cold water, allow to dry and then smoke. Take note that rodents and rabbits can be infected with tularemia (rabbit fever) which can be transmitted by handling an infested animal or eating not fully cooked meat. Disease is rather rare and is easily treated with antibiotics. Game meat can be cured by stitch/dry curing method or brine (immersion) method. Follow curing and injection procedures explained in the Chapter on Ham.

The meat quality of wild birds is less predictable than farm raised chicken or turkey due to the different age of the birds that reside in different areas. They have fed on an unknown diet which affects the flavor of the meat. What is predictable is that these birds are very lean and will benefit from curing. Cure birds as you would domestic poultry. Wild birds require frequent basting during smoking and cooking. Place an aluminum pan under the bird to catch drippings which may be utilized for making gravy later. A good approach is to cover the whole bird with bacon strips and secure the strips with wooden toothpicks. Keep in mind that meat areas covered with bacon strips are not exposed to smoke and will develop a pale color. For uniform color bacon strips should be removed during the last 1-2 hours of smoking. During the cooking stage, the temperature will be raised to 170° F (77° C) or higher and the meat should be frequently basted to prevent drying.

Quality jerky is made from lean meats with as much fatty tissue removed as possible. Fats become rancid in time and the jerky’s flavor will deteriorate. Wild game meat is very lean by nature so it is not surprising that great jerky is made from venison.

If meat preservation plays a secondary role, wild game can be successfully smoked/cooked (barbecued) with fire. The traditional method of curing meat with salt and nitrite may be replaced with marinating. Marinade may include strong herbs or spices such as juniper or rosemary which can offset the gamey meat flavor. As smoking/cooking will be performed at 200-225° F (93-107° C) there is little to worry about botulism or trichinae. At these temperatures wild game lean meat will easily dry out and it should be frequently basted with oil rich basting marinade.

Basic marinade includes water, vinegar, oil and flavorings. Often orange, lemon or pineapple juice are added. Don’t add too much sugar as it tends to brown and caramelize the surface of the meat. Keep in mind that a basting marinade is thin, it is not a sauce. The oil is always used in wild game marinades.

Spices such as allspice, onion or garlic powder, ground celery, thyme, ginger, juniper, rosemary, sage, parsley, marjoram, and dry mustard are often added. Curry powder imparts a characteristic flavor to food and may be used with wild birds. In the wet smoking method marinade can be used instead of water when filling the pan. The pan should be placed under the meat to catch the meat juices dripping down. Then as the liquid evaporates, the marinade will baste meat with its own juices. If meat was marinated overnight, the marinade has picked up gamey odors and should not be used for basting purposes. Smaller parts may be marinated in wine marinade for about 6 hours. Then they are submitted to the smoking and cooking steps according to established rules.

Larding is a technique used to add fat to very lean meat. It also helps to enhance the flavor of tougher cuts by internally basting and moisturizing them with fat. A strip of fat is cut from pork back fat or bacon and it should be chilled to harden it. All wild game, wild fowl included, will benefit greatly from this procedure. A larding needle is designed to push fat into meat.

Fat can be seasoned with herbs, or spices and the ingredients will fully penetrate the meat rather than remaining on the surface. A strip of fat or lard is forced into the larding needle, and then the needle is pushed through the cut of meat to be larded. As the needle passes through the meat, it leaves the strip of fat behind.

The sharp point of the needle penetrates meat and exits on the other side. A serrated jaw swings outward to facilitate fat loading.

A two part design, consisting of two separate interlocking half tubes. A fat strip is loaded into the bottom half tube. Both parts are locked and the needle is inserted through the meat. The sharp part of the needle is removed on the exit side, the upper pushing part is removed at the insertion point and the fat strip remains inside.

Thin strips of fat are threaded with the needle, just below the surface.

Long, thin strips of fat are threaded through the whole piece of meat, following the grain.

Barding is a technique similar to larding that relies on the laying of fat over the meat rather than inserting it into the flesh. This method is more practical for fattening small pieces of meat and wild fowl. Commercially manufactured rendered lard (melted pork fat) can be spread on the surface of meat. A combination of larding and barding may be used as well.

Cut thin but wide sheets of pork fat and cover the entire piece of meat, for example the breast of the goose. Secure with twine.

A typical procedure for smoking beef or wild game brisket