Sausages, hams and other pieces of meat are considered a raw product unless heated to an internal temperature of about 154º F (68º C) and it is of no importance whether it is done by boiling, steaming, grilling or baking. A sausage might be smoked at 100º F for 6 hrs, will have a great smoky taste, flavor and color but it will still be a raw sausage like a fresh sausage that was only ground, mixed with spices and stuffed into casings. Both of them must be cooked to safe temperature before consumption. Fats start to melt at 95-104° F (35-40° C) and going over 170° F (76° C) internal meat temperature will decrease the quality of the sausage. Staying within 154-160° F (68-72° C) will produce the highest quality product.

Special sausages such as blood sausage, liver sausage and head cheese have their ingredients pre-cooked before being minced, mixed and stuffed. As different cuts like skins, tongues, or jowls for example, will call for different cooking times it may seem that many pots might be needed. The solution is to use one pot but place the meats in separate bags made of netting. Each bag is removed as soon as the meat in it is cooked sufficiently. The leftover stock should be saved and used as a cooking medium as these sausages are cooked in water. If not enough stock remains, add more water. After sausages are cooked the remaining stock may be used for a soup.

Cooking in a Smoker

It makes a lot of sense to cook smoked meat in the smoker as it is already there. Besides, it will have a slightly better taste than by using the poaching method and it will shine more. On a downside, it will lose more weight than by other methods. It is also the slowest and the most difficult method that largely depends on the technical possibilities of the smoker. A slowly increasing temperature inside the smoker will achieve the best effects. The smoking process is relatively fast and a typical 36 mm sausage will be smoked in about 1.5-2 hours. Depending on the temperature when the smoking process has ended, such a sausage may be cooked to the safe internal temperature of 68° C (154° F) in 30 minutes or three hours.

While it takes 1-2 hours to smoke a sausage, it may take an additional 3 hours to cook it inside the smoker. It will largely depend on the inside temperature of the meat when smoking was stopped. If it was 100° F (38° C) we have a long way to go, if it was 150° F (66° C) we are almost there. That shows a need for some intelligent planning and it is advisable to slowly increase the smoking temperature to about 160° F. When smoking is done, the temperature should be increased to 170° F (77° C) and maintained at that level until the inside temperature of the smoked meat reaches 154° F (68° C).

As most products are hot smoked today, the cooking process will be relatively short. It is a good idea to start raising the smoking temperature within the last hour of smoking in order to finish smoking at a high temperature. Actually cooking may become part of the smoking process itself and the smoking may end at 68° C (154° F) making the product both smoked and cooked. A lot will depend on outside conditions and how well the smoker is insulated. That may be difficult to achieve sometimes and we will have to increase the temperature of a smoker to about 185° F (85° C) to bring the internal temperature of the meat to the required level. Cooking can also be accomplished in the kitchen oven although in the electric type the lowest thermostat setting may be as high as 88° C (190° F). This way the process will be relatively short.

People seldom realize that most sausages, including smoked ones, are cooked in hot water (around 80º C, 176º F), which on average takes 15-60 minutes, depending on the diameter of the product. It is also easier and faster to apply than cooking in a smoker and the meat weight loss is smaller. This is due to the fact that water conducts heat more efficiently than air. Water is brought to the temperature of 158-194° F (70-90° C) and the meats or sausages are immersed in it. For instance, home made hams are poached at 176° F (80° C) and this temperature is maintained until the meat’s inside temperature reaches 154° F (68° C).

A rule of thumb calls for about 30 minutes per pound, depending, of course on the cooking temperature. Some recipes call for preheating the water before adding the sausages and some call for adding the sausages to cold water. Most people prefer the latter method. The poaching water should be heated rapidly to 175-185° F (80-85° C). At 176° F (80° C) the sausages are poached from 10-120 minutes, depending on the type and size of the product. It is generally accepted that 10 minutes are needed for each 1 cm of the width (diameter) of the sausage.

Poaching times for products up to 60 mm in diameter:

Once the diameter of the sausage is larger than 60 mm, the above times are less accurate and should be increased. Double up the time, it is better to be safe than sorry. For example pork stomach may be cooked for 2-3 hours. The best solution is to use a meat thermometer. The poaching method is a good method for sausages that are smoked with hot smoke. The short hot smoking process creates a dry layer on the outside of the sausage, similar to a second skin, that prevents the migration of moisture and juices from inside of the sausage to the water in the pot. A cooking pot remains uncovered during poaching.

A sausage may contain air which sneaked in during the stuffing process. Such a sausage will swim up to the surface and the remedy is to prick it with a needle. This will unfortunately permit some of the juice to migrate into the water. This is another reason why many people save this stock for making soups. A good solution is to construct a grid shaped wooden float-cover that will be fit to the diameter of a cooking vessel. Such a cover is placed on top of sausages and keeps them submerged all the time. The cover can be used during cooling sausages as well.

Cooking meats and sausages in hot water is more convenient than baking in hot air. Water in an open container at sea level will always boil at 212° F (100° C) and no higher. This precisely controls the maximum temperature that can be obtained using the simplest equipment. When baking we depend more on the technical capabilities of the smoker or the oven and more supervision is required. 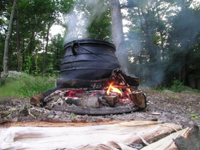 Waldemar cooking in the Catskill Mountains of New York 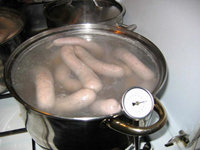 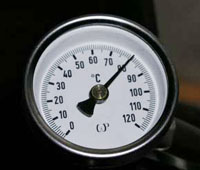 Baking in the Oven

You can bake your meat or sausages in the oven as long as your unit can maintain temperatures of 190° F or lower (preferably 170° F) and home ovens are normally capable of delivering such low temperatures. If the oven’s lowest temperature will be higher than 190° F (88° C) switch to the poaching method. Baking sausages in a smokehouse is less efficient that poaching them in water, but they look better having a glossy look on the outside. This is due to the fat that has melted under the surface of the casing and moved to the surface where it resides as a thin coat of grease. It is like putting grease on a pair of boots, they are going to shine and look better. Besides the looks, the flavor of a baked sausage is also slightly better as there was no loss of meat juices which in the case of poached sausages will migrate to the water. The disadvantage is that the baked sausage loses more weight than the same sausage poached in water.

To sum it up: anything falling within 154º – 160º F (68º - 71º C) is cooked to a safe temperature, the Government recommends 160º F and there is absolutely no reason whatsoever to go any higher. For a home sausager maker the inside temperature of the meat should fall between 154º – 160º F. We can stop cooking at 154º F (67º C) as most products will be of smoked variety and thus previously cured with salt and nitrite what gives us considerably more safety. Fresh sausages and meats which were not previously cured, will not be smoked, just cooked before consumption and the recommended temperature of 160º F should be observed.The lower the cooking temperature, the juicier and tastier the product is and the weight loss is also smaller.