Poland has a long history of creating infusions. A good explanation is the abundance of fruit, nuts and berries that grow everywhere. Add to the fact the great fondness the Poles show towards drinking and there you have it, alcoholic infusions of all types abound everywhere in Poland.

Until the XVI century the alcoholic beverage that was commonly consumed in Poland was beer. It wasn't just a beverage, it was also consumed as a soup. It was a high caloric food, that due to its high alcoholic content kept surprisingly well. Honey wines were always popular in Poland as grapes did not grow well there. The drinking habits of a lot of countries changed in the XVIII century when the process of making alcohol from potatoes and grains like barley, wheat and rye was perfected. This combined with the technology of producing inexpensive sugar from sugar beets established the industry for making vodka and other spirits that continues to prosper in Poland. Poor folk drank plain vodka crudely distilled from rye, known as okowita. The more affluent used okowita for making infusions. Those original extracts contained 25-75% alcohol, 30-40% being the average. These were patiently produced drinks as the production time was usually between 3 months to 3 years. The containers were stored in root cellars, sometimes covered only with soil. Later, infusions were stored in large glass containers which did not color them the way oak does. After being poured off into bottles, infusions were submitted to a 6 month aging process, and then came the long awaited moment of tasting. Needless to say, this was an occasion for a huge celebration. The recipes varied and were closely guarded, becoming secrets of the house. In rich homes there was a dedicated storage room, an "apteka" (pharmacy), where different types of tinctures were stored and guarded. In smaller ones there was at least a large cabinet "apteczka" (little pharmacy) which contained all alcohol based medicaments. The lady of the house was the keeper and the doctor. Those storages were equipped with a multitude of remedies. Stored items included drinks for upset stomach, extracts functioning as anti-venom, herbs and spices for treating wounds, cosmetics, soaps, waxes, bear, fox, raccoon and wolf fat, vinegars, drinks protecting against ghosts, bad dreams and spirits, and even love potions. Common items were kept as well: garlic, dry mushrooms, vinegars, saffron, vanilla, cinnamon, cardamom, nutmeg, allspice, pepper and others. It was a combination of science and witchcraft, where alcoholic tinctures, snake oil and infusions, played an equal and important role.

When sugar became available, infusions became sweeter and liqueurs were introduced. In rich households, during an important occasion, different types of infusions were served with each dish, similar to different wines which are served during the course of a meal. Hunters always took infusions or the stronger Lithuanian honey spirits on overnight hunting expeditions where the drink provided warmth, and greater imagination for story telling. At the same time, women who were waiting for their loved ones were sipping infusions with cakes and coffee. The general consensus became that the world could not function without infusions. It was believed to be a drink that sparked the imagination of the drinker, as well as possessing medicinal values. Infusions were well known in most European countries, not just in Poland. In Russia, Lithuania, Ukraine and Germany, infusions were regularly consumed. The history of alcoholic drinks in those countries is similar to that of Poland. Originally people drank a lot of beer, fermented honey mixed with juice with hundreds of different types of infusions. Infusions were made from herbs and fruits and mixed with alcohol that was obtained from distilling honey. Keep in mind that centuries ago cane sugar was unheard of and the technology of making sugar from sugar beets was not yet invented. Honey was the universal sweetener. Distillation was already popular, but was mainly reserved for making medicinal drinks. Wine was popular in countries with sunny and warm climates such as Italy, Greece, Spain, Bulgaria and Hungary.

Fruit infusions were made from fruits and herbs by covering them with alcohol. Those original infusions contained only 20-30% of alcohol and could be considered alcoholic extracts. As the distillation process became universally known and the technology permitted making alcohol from grains and potatoes, fruit infusions became more popular and stronger. 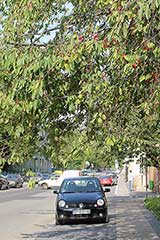