Meat smokehouse needs smoke delivery pipe to supply sufficient amount of smoke. A little smoker may need just a pan with some sawdust in it, but a smokehouse needs more smoke. It is hard to beat the effectiveness of a smoker that is connected to a fire pit with a pipe or a trench in the ground. The distance between them should be about 4-7” (1.2 – 2.1 m) and they should each stand on a different level, with the smoker obviously higher than the fire pit. The pipe (trench) must be covered with at least 2” (5 cm) of soil to provide insulation. The rest depends on the imagination and technical skills of the builder and can involve dozens of different arrangements. Two metal drums can be used (one for the smoker and the other for the fire pit). For the smoker, a simple wooden box will do. The fire pit can be built from bricks, stones, or some other elaborate design.

There is no fixed rule for the length of the pipe. A 4’ - 7’ (1.2 – 2 m) pipe seems to be the preferred length in most installations. An important thing is that it has sufficient draft for the smoke to flow freely. The pipe connecting the fire pit and the smoker should be about 4-6” (10-15 cm) in diameter and made of suitable materials like stainless steel, metal stove pipe, sewer clay pipe, or a concrete pipe, but never plastic. A little incline of 5 - 10 degrees will help direct the smoke into the chamber. Increasing the angle even more is not practical on flat ground because it will require digging a very deep hole to accomodate a fire pit. Placing smokers on a very high base would also require a step ladder. 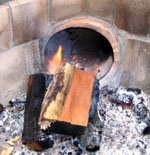 It is amazing how many designs call for a 12 foot long pipe, yet, they do not provide any reasons for such a length. The feasible explanation would be to cool the smoke down but how can you bring the smoke temperature down to 70° F (21° C) when it’s a baking hot 95° F (35° C) in the shade in Florida? The hot smoke (well over 100° F) enters the pipe where it will remain for a few seconds. Even submerging it in the Gulf of Mexico will not help because the average water temperature is 85° F (30 °C) for about 6 months out of the year. At best you can generate cold smoke at night time in December, January and February when the temperatures drop down to 50° F (10° C).

The same pipe (if made of metal) will be more effective in cooler climates allowing cold smoke generation for most of the year. What about those who smoke in the Northern States, Canada, and Northern Europe? They don’t need a long pipe to cool down the smoke; they may have problems generating sufficient heat to cook the product. An exposed long metal pipe will loose so much heat in winter months that it will have to be insulated. Before we decide on the length of the pipe it would be wise to answer the following questions:

In the past the cold smoke problem was solved by building high smoking towers (especially in Eastern Europe) that were 18’ tall. The smoke would come in through a trench from a free standing fire pit outside. The height of the tower induced a lot of natural draft and the smoke was quite cold before escaping the smoking chamber. Bear in mind that the countries in Europe where most serious smoking is done lie in the lattitude of Quebec, Canada, where the climate is much cooler than the rest of continental USA. Similar designs of smokehouses were employed in Virginia in colonial America. For people living in a hot climate the best technical solution is the one we have been using for thousands of years. If you like to use cold smoke, then wait for the winter months. In the summer, you are better off to smoke products with warm or hot smoke.

Any environment friendly material could be used for making pipes, and some of the best ones are listed. Stainless steel, metal, concrete, sewer pipe, clay pipe and stove pipes are all good materials for pipe making. Air conditioning duct pipe is also good, and it comes in different sizes. There is a wide assortment of elbows, reducers, as well as other connectors for those interested in making pipes. It is inexpensive, very easy to work with, and commonly available. It has one drawback; it is made of galvanized steel. To tell if galvanized steel is good for smoking is like trying to decide which came first, the chicken or the egg. It is made of metal sheets that are dipped into a hot bath of melted zinc and some other chemicals. Zinc melts at 787° F (420°C), and boils at 1,665° F (907° C).

Although zinc presents no danger, a metallic element such as cadmium is bad for our health. Determining the exact composition of a particular pipe is difficult. This is why the Food Safety and Inspection Service of the United Stated Department of Agriculture says "Don’t smoke foods in makeshift containers such as galvanized steel cans or other materials not intended for smoking." With every puff of a cigarette, we probably inhale more chemicals than if we had smoked meat for 100 hours with a galvanized pipe. But to keep our conscience clear, we decided to present the official view of our government.

Before smoking for the first time, any section of pipe that makes direct contact with burning wood in the fire pit should be burned with hot fire. This takes care of initially burning away any deposits. The rest of the pipe is exposed to such low temperatures that it can not possibly react with any chemicals that were deposited on its surface during the manufacturing process. Better still, break your pipe into separate sections. The section that makes direct contact with a fire pit can be made of steel, tile pipe, or reinforced concrete, and the rest can be made of galvanized duct.

Smoke can be delivered by a brick or concrete channel.

The pipe may be buried inside or not.

Digging a trench instead of installing a pipe creates a weaker and impermanent design. Nevertheless, for those in a hurry or on a tight budget, it is a viable solution. It can be constructed anywhere, in the woods during a hunting trip or on the beach. Fortunately, there are almost no costs involved. Digging a trench is a very simple matter since the width of the board controls all other criteria. All we have to remember is that the width of our trench including all its dimensions have to be covered by the board.

A good trench is 8” wide by 11”deep ( 8” for the trench channel and 3” for the soil cover). The first dimension is crucial because the trench will be covered by a wooden plank 12” wide and 6 – 8’ long, a size ususally stocked by building supply stores. A gap of at least 1 ft is needed between the firepit and the beginning of the wood channel to eliminate the possibility of flames reaching and burning the wood boards. This gap is covered by a metal plate or a concrete slab measuring about 18”x18”, available in any hardware store. Now we can cover everything with at least 3” of soil. In the wilderness, we have to find a suitable rock that will perform the same task. 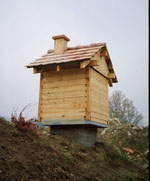 Smokehouse sitting on top of the channel.

The trench should rise 1” per foot, atop the fire pit creating a 5 degree angle. Instead of a wood plank, four concrete slabs may be used, as long as they touch each other and prevent soil from falling between them. They come in different sizes, most often square and ranging from 12 inches to 18 inches and about 2” thick. A trench dug out in sandy soil will need some gravel and small rocks to reinforce it, or its walls may start to collapse.

A nice finishing touch is the installation of a smoke diffuser which is a galvanized metal box, 1 foot (30 cm) square and 2 feet (60 cm) high, open at the bottom. Three-quater-inch (19 mm) holes are drilled or punched in the sides and top to permit the escape of smoke. The diffuser is placed over the mouth of the elbow and allows for an even distribution of smoke throughout the smokehouse.

Box diffuser in a large smokehouse

In mountains or windy areas it is a good idea to place a fire pit in a position where the smoke will follow the direction of the prevailing wind. For instance, if the wind blows from the south to the north, the fire pit should be placed south of the smoker. In this manner, we no longer fight against the wind but use it to lead smoke into the chamber.