Packing methods used in canning by commercial packers and home canners vary greatly. Commercial packers use containers of all shapes, sizes and materials. Glass, steel, aluminium, plastic-cardboard-aluminium combinations, plastic containers and all types of closures. Such containers are processed by specialized equipment that is not available to a hobbyist. A home owner will can his products in glass jars or in metal cans, both types of containers are described in detail in Equipment section.

Raw-Packing - is the practice of filling jars tightly with freshly prepared, but unheated food. Such foods, especially fruit, will float in the jars. The entrapped air in and around the food may cause discoloration within 2 to 3 months of storage. Raw-packing is more suitable for vegetables processed in a pressure canner.

Hot-Packing - is the practice of heating freshly prepared food to boiling, simmering it 2 to 5 minutes, and promptly filling jars loosely with the boiled food. Boiling hot liquid is added to the jars. 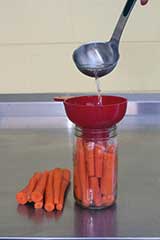 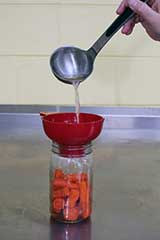 Hot pack - raw foods are boiled 3 - 5 minutes in a saucepan, then poured into jars. This helps to remove air from food tissues, shrinks food, helps keep the food from floating in the jars, increases the vacuum in sealed jars, and improves shelf life. Foods packed hot should be packed loosely, as shrinkage has already taken place.

Canned meat retains flavor and color better during storage when the meat in each can is entirely covered with liquid. Water or drippings from the pan in which the meat was precooked should be added to the meat after it is packed into the jar or the can. Some juice will be released from meat precooked in cans during exhausting, but if that is not enough to cover the meat, hot water should be added before sealing. Whether food has been hot-packed or raw-packed, the juice, syrup, or water to be added to the foods should also be heated to boiling before adding it to the jars. At first the color of hot-packed foods may appear no better than that of raw-packed foods, but within a short storage period, both color and flavor of hot-packed foods will be superior. Pre-shrinking food permits filling more food into each jar.

Removing air. Air bubbles are removed by running a plastic knife or spatula around the inside of the jar.

There should be enough liquid to fill in around the solid food in the jar and to cover the food. The food which is not covered by liquid tends to darken and develop off-flavors. A common example is peeled raw potatoes which will darken unless covered with water.

Raw-pack - The raw meats are packed tightly into the jars all the way to the top. When processed in the canner, the meats will shrink and release juice.

Hot-pack - The meats are precooked and packed into cans hot. Then they are filled with hot liquid (pan drippings, meat broth or hot water) leaving 1/4 inch headspace. Seal and process at once.

NOTE Filled containers should be sealed as soon as possible when still hot and placed in hot water in the canner. Then they should be immediately processed. The higher the filling temperature, the less pressure will be generated in the container by heating the contents. As a result a stronger vacuum forms in the container after thermal processing and cooling. Salt does not preserve meat in canning and is added for flavoring. It can even be left out altogether. If used, place salt in the container before putting in the meat.