Extract is a substance made by removing part of a raw material, often by using a solvent such as alcohol, oil or water. The majority of natural essences are obtained by extracting the essential oil from blossoms, fruit, roots, or the whole plants through pressing, absorption, maceration and distillation. Hot water extract is the outcome of steeping dried herbs, flowers or berries in water. Water is typically boiled and then poured over the herb, which is then allowed to steep in the liquid for a period of time. The liquid may then be strained or the herbs otherwise removed from the solution. Steeping performed for no more than 15 to 30 minutes, or until the mixture cools, will create a beverage with optimal flavor. Steeping for up to four hours, however, produces stronger medical herbal infusions. A common example of a hot water infusion is tea. Many fruits and roots such as lemon, apple, cranberries and ginger are used individually or in combination to make tea infusions. Linden and chamomile flowers are also infused with tea leaves. Herbal infusions in water and oil are both commonly used as herbal remedies. Chamomile, for example, is a plant known for its ability to help with sleep and chamomile tea is often served with either honey or lemon. Linden or rose teas are often mixed with alcohol and honey to create wonderful spirits.

In cooler climates Linden trees grow everywhere, even on Roosevelt Island in New York City. Unfortunately most people have lost their bond with nature and live entirely on the Internet. Instead of picking up linden flowers for free they spend a fortune buying them as dried flowers in pharmacies or as linden tea in expensive supermarkets. Alcoholic herbal infusions are cold infusions; they are made with alcohol and don't need to be heated. Alcohol softens the skin, breaks the cell structure and draws out oils, fats, proteins, color agents and flavor substances.

Aromatic spices such as vanilla, cinnamon, nutmeg or orange and lemon skins are commonly added to many infusions and liqueurs. It makes our work much easier if strong extracts/infusions are made from those materials for future use.

Mixing 75% Everclear with 40% vodka produces 58% alcohol.
When macerating is completed, filter infusion through a coffee filter.

Spices are mixed with alcohol in a 1:9 ratio. This makes it easy to measure later. For example take 10 g of cinnamon stick. Break the stick into 1 cm pieces, then add 90 ml of 50% alcohol. After macerating, strain the liquid and place in a measuring cylinder. Add water to 100 ml mark. Now you have 100 ml solution where each 10 ml equals to 1 g of cinnamon stick. You can easily measure and apply 1 ml (0.1 g) of solution with a common syringe.

Using 1:9 ratio for citrus skins and almond infusions does not produce a desired flavor so the proportions are different. American supermarkets carry vanilla extract. This makes your work easier and vanilla extract can be added after a fruit infusion has been strained and filtered. 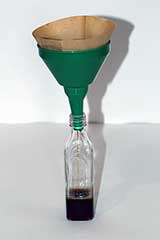 To simplify matters you may create an All-in-One aromatic infusion that you can apply to your recipes:

Citrus aroma is due to the aromatic oil that the skin contains. It takes around 10 kg of skins to produce 150 g (1.5%) of the oil. The oil is retrieved by cold pressing skins using machines that are beyond the reach of an ordinary homeowner. However, homemade extracts/infusions provide good results. 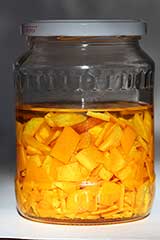 Peel off the skins and remove the white pith as it is bitter.

The pith was removed from the right peel, and only the skin remains.

The pith can further be reduced with a knife.

Cut skins into 1 cm pieces and cover with 75% alcohol. Macerate for 3-4 days, then filter through a coffee filter. Although basic rules state that strong alcohols should be used with juice rich fruits, in this case we are not after the juice but after the orange and lemon aromatic oils that the skins contain. Oils dissolve readily in strong alcohol and weak alcohols will not extract them well. Maceration time is 3-4 days only as the infusion will become bitter if allowed to continue longer. Citrus fruits don't filter well, but the skins produce a very clear and aromatic infusion. Grapefruit skin infusions carry less aroma than lemon or orange infusions. 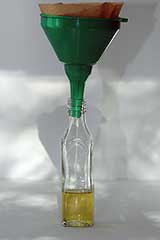 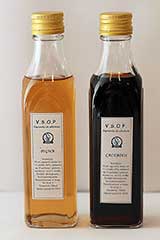 VSOP infusions extracts. All it takes is to mix 50 ml of the extract with 1 liter of plain vodka, and then let it age for one day.

Extracts can be thought of as weaker essential oils that can add extra flavor to an infusion. There are hundreds of available extracts to choose from. Simple flavoring infusions/extracts can be made at home.

McCormick Company makes many extracts which can be obtained in a large fodd supermarket. Mountain Rose Herbs www.mountainroseherbs.com distributes wonderful extracts and essential oils which can be used for making vodkas.