In Poland, vodka has been produced since the early Middle Ages. The word "vodka" was first written in 1405 in Akta Grodzkie, the court documents from the Palatinate of Sandomierz in Poland. The definition applied to early alcoholic tinctures that were prescribed for medicinal and aesthetic purposes. The first written use of the word vodka in an official Russian document in its modern meaning is dated via the decree of Empress Elizabeth in June 8, 1751, which regulated the ownership of vodka distilleries.

Alcoholic spirits were produced in Russia much earlier than 1751. At the beginning of the XVI century, vodka became synonymous with the Polish word "gorzalka" which means strong alcoholic drink and both words are commonly used. Then the word found its way to Russia. The dispute about which country invented the drink continues even today, the pronunciation and the spelling is almost identical; Polish "wodka" and Russian "vodka" describe something that is derived from water, and this is exactly what the drink is; alcohol diluted with water. Starting in the XV century, the first vodkas, also called "wodka", "okowita" or "gorzalka" became a popular alcohol drink mainly among peasants. In the XVI century nobility started to drink the spirit as well and that led to a universal acceptance of the drink. The consumption jumped so high the manufacturing and selling of vodka was taxed. Poland started to supply vodka to neighboring countries. Russian merchants exchanged furs and skins for vodka. Vodka was also exported to Czechoslovakia and Hungary. As the word spread other countries such as Germany, England and France started to appreciate the drink. The new industry in Poland took off and soon spirits were produced in many cities: Warsaw, Lwow, Gdansk, Gniezno and Poznan.

The ongoing discussions of who invented the word "vodka" is trivial as Poland was the first country that produced the spirit on a large scale. The city of Krakow was manufacturing and exporting vodka in 1550. There were 49 large distillation machines in 1580 in Poznan. Those centers were producing different types of vodka and liqueurs. One of the biggest centers was Gdansk (Danzig) where a total of 680 breweries operated non-stop. In 1598 Gdansk started the production of outstanding liqueurs that were exported to Germany, Holland, France and England. The best known liqueur was Goldwasser (Gold Water) which is still popular today.

The general acceptance of the spirit led to increased consumption in Poland and in other countries. In the XVII century the average consumption was 5 liters of vodka per person. The first industrial distillery was opened in 1782 in Lwów by J. A. Baczewski and his products are still available today. He was soon followed by Jakub Haberfeld, who in 1804 established a factory in Oswiecim, and by Hartwig Kantorowicz, who started producing Wyborowa in 1823 at Poznan. In 1925 the production of vodkas was monopolized by the government. After World War II, all vodka distilleries were taken over by Poland's communist government. 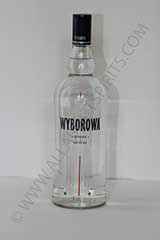 When WWII ended in 1945, Poland along with other countries was taken over by the Stalin regime which created a new political system. The currencies of those countries were not recognized by the West and they were faced with enormous difficulties in obtaining hard currency (dollar) in order to purchase machines and tools from the West for rebuilding their economy. One of the main dollar earners became Polish vodka which was made by the state run Polmos company. Polmos produced outstanding vodkas and some of them such as Wyborowa, Luksusowa, Zytnia, Zubrowka and Spirytus (95% alcohol) flooded the U.S. market.

Vodka brands like Absolut, Finlandia, and Bols were not common yet. Polish vodkas dominated the market. Russians followed with Stolichnaya and Americans started to produce Smirnoff. All those vodkas were plain spirits with a neutral taste and led themselves perfectly for making mixed drinks. Remember James Bond's favorite drink: "vodka on the rocks, shaken but not stirred."

Between 1962 and 1990 Polish Wyborowa has participated in 29 World Competitions and has won 29 medals, 22 of which were gold. After the victory of the Solidarity movement, all distilleries were privatized, leading to an explosion of brands. In the 1990's Wyborowa was bought by French Pernod Ricard but was little promoted. In 2002 roku Wyborowa won the International High Quality Trophy from Monde Selection and it has won the gold medal for three consecutive years in the Monde Selection competitions. It has been probably the best vodka ever and it is a pity it has not been better marketed or diversified into flavored varieties sooner.