Mullet can be caught at any time, day or night, and in various locations as well. They are found inshore from a boat, grassflats, piers, off seawalls, docks, bridges, canals, and streams. Their abundance near all these areas is appealing as a fisherman can catch them practically anywhere. Mullet are especially attractive to many because a boat is not needed to catch them. Another advantage is that typical fishing restrictions that usually limit fish quota to a few fish per person, do not apply to mullet. In the state of Florida an individual is allowed to catch and keep 50 mullet per day. Mullet gather and swim in large schools. They can be seen one or two at a time, but more often they are seen in schools of 20 to 50. Mullet frequently swim near the surface in shallow waters making them an easy target from land.

Looking for a smooth bottom.

Mullet, sheepshead and crabs, all caught with a net.

Many fisherman fish for mullet at night to decrease the chances of being spotted by the fish. When fishing at night it is advised to wear dark clothes as it is easier for the fish to spot a white shirt in the dark. It is also believed that as a fish is approaching and it sees a white outline in the distance, it is frightened and thinks that outline is the underbelly of a dolphin or a larger fish that may pose a threat. Invest in polarized sunglasses. They eliminate sun glare from the water and make seeing fish much easier.

The mullet is a very unique fish. There are over 80 species of mullet which are native to many countries. The are found on the coast of every continent with the exception of Antarctica. Mullet tolerate a wide range of salinity levels. They are primarily a saltwater fish but venture into and survive in brackish and fresh water.

Mullet have gizzards. A mullet gizzard is surprisingly similar to a chicken gizzard, in taste, function, and appearance.

Mullet constantly jump out of the water. They can be easily seen emerging from the water in succession in bays, beach areas, and near grassflats. Photo courtesy Benjamin Cox, North Carolina. 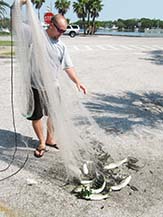 A small school of mullet were caught with the net. Mullet are usually not caught with a fishing rod. They won't eat the bait because they eat algae and decomposed matter. Quite often if you throw a cast net over a school of fish, you are catching many mullet at a time.