Lard can be obtained from any part of the pig as long as there is a high concentration of fatty tissue. The highest grade of lard, known as leaf lard, is obtained from the "flare" visceral fat deposit surrounding the kidneys and inside the loin. Leaf lard has little pork flavor, making it ideal for use in baked goods, where it is treasured for its ability to produce flaky, moist pie crusts. The next highest grade of lard is obtained from fatback, the hard subcutaneous fat between the back skin and muscle of the pig. To extend the shelf life of pork fat (or any fat) it must be rendered (melted down), offering the following benefits:

Two types of lard can be produced:

1. Lard shortening that will be used for general cooking and frying. Such a lard can be made from any pork fat and even 20% of beef fat may be added. The leftover cracklings are normally saved for making liver or blood sausages. The easiest way to make lard is to mince fat with a grinder and that will produce the largest amount of lard.

2. Ready to eat lard (smalec in Polish) has been traditionally produced in Europe to be spread on a slice of bread and eaten as a sandwich. Such lard is made from pork fat only, preferably from back fat. Belly fat may be used as well although it may be considered a waste as bacon can be processed in many other ways. The resulting cracklings are saved and become a part of lard. They may be added to boiled sausages (liver and blood). The highest quality lard will be obtained when the pork fat is manually diced into 1/4 inch cubes which will produce a larger number of solid cracklings, known in Polish as skwarki. To add extra flavor, ingredients such as onion, garlic, apple or marjoram are often added.

In the past back fats were about 2 inches thick. 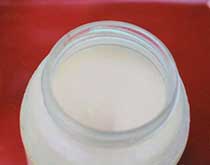 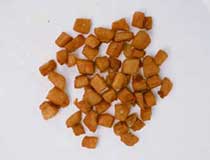 Cracklings. May be added to lard or used in blood sausages. 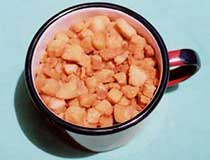 Cracklings should be of light brown color.

Follow the above procedure and when the lard is half-way done (becomes semi-liquid), add chopped onion. Add onion carefully as it contains water and the lard may boil over. Then continue as usual.

Fried onions in lard
until yellow.

When chopped onion is added to lard, the lard should be refrigerated. If lard will be kept at room temperature, add whole peeled onion and then discard the onion during filtering. If not kept under refrigeration, chopped onion will decrease the shelf life of the product. This is why it is added to canned products in such a small amount.

Add whole onions, a few cloves of peeled garlic, apples cored and cut in halves, and a bay leaf. Remove those ingredients during filtering. Add spices of your choice: marjoram, coriander or others. Lard consumed as a spread on bread was once very common in Europe and North America, especially those areas where dairy fats and vegetable oils were rare.