Bleeding fish is a phrase used to describe the removal of blood from fish. It should be performed as soon as possible when the fish are caught. Bleeding fish is performed to preserve the quality and appearance of the meat. Mullet are bled by snapping the head of the body then sticking the index finger and middle fingers in their gills and ripping them out. The blood immediately starts to squirt out for about 10 seconds. There are a few main advantages to bleeding mullet: it results in whiter meat when filleted, there is a less fishy flavor present, and the bacteria spoilage is slowed down.

Some fish have little scales, in others the number will vary, for example European King Carp have a few scales on top, but wild carp is fully covered with them. Scales can be removed with a scale removing scraper or back of the knife going from the tail toward the head. The scales will fly everywhere so the operation is best performed outside or by placing the fish in a large plastic bag.

The entrails will be removed through the gill opening.

Gills can be removed with fingers. Knife or scissors may be needed on a larger fish.

Then all the guts can be pulled out.

A long and stiff toothbrush will scrape off the stomach lining and the red kidney line.

Fully dressed mullet which was not cut at all. Such a fish can be stuffed, baked and served elegantly on a plate.

The fastest way to gut most fish is by cutting off the head and splitting the belly. However, for visual effects, we may want the head to be attached to the body. The gills and the entrails can be removed by cutting into the area under the chin that joins the bottom of the two gill openings. Then cut the belly cavity without cutting the intestinal tract. Now, the gills and entrails can be pulled out. Trout which is sold in supermarkets is prepared that way. This can be further simplified by splitting the belly from the vent forward. Many fish can be prepared this way, although some rock fish have such hard jaws that the method becomes impractical.

This trout has been gutted by cutting the chin and removing gills and entrails through its mouth.

This is the same fish presented in the figure above.

This is the same fish presented in the figure above.

After the chin membrane has been cut, the gills with attached entrails are removed. 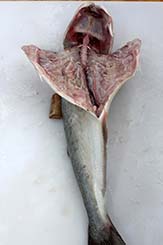 The body cavity is washed and all traces of blood are removed.