How to Render Lard Commercially

Fat trimmings for lard should be kept in the cooler and lard should be made as soon as possible. Always cut the rinds off the fat as they will lower the quality of lard.

1. Grind fat pieces through a small grinder plate. Partially freezing fat trimmings makes the operation easier. The smaller the grind, the easier the oil release by the fat. You could cut the fat trimmings by hand, but this is slower.

2. Get a large kettle and put water in. Use ¾ cup of water per 2.2 (1 kg) of ground fat. The water prevents the lard from scorching. Add all fat and slowly apply the heat. Thee kettle should be filled no more than three-fourths full. Slow is the word; apply the heat gently in order to melt some fat, then you can turn the heat up, however, be aware that the lard tend to be darker when the heat is applied too rapidly. The cooking process will take about 90 minutes.

Using a draining spoon, skim out all the cracklings and any impurities from the surface. Butchers ran the cracklings through a lard press to squeeze out all oil, which was added to that in the kettle.

3. Pour the lard through a piece of cheese cloth into a collecting tank, known as the settling tank. 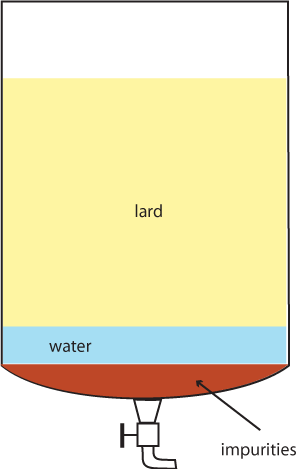 The collecting tank can have a dome shaped bottom with a large faucet at the bottom or the bottom can be flat with the faucet installed close to the bottom. 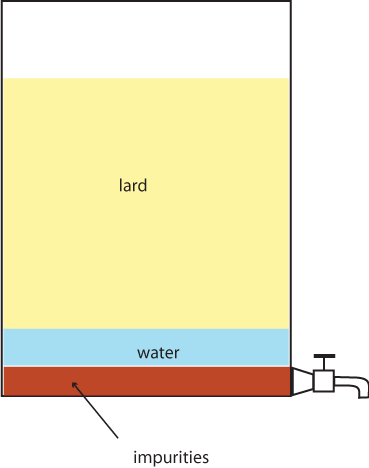 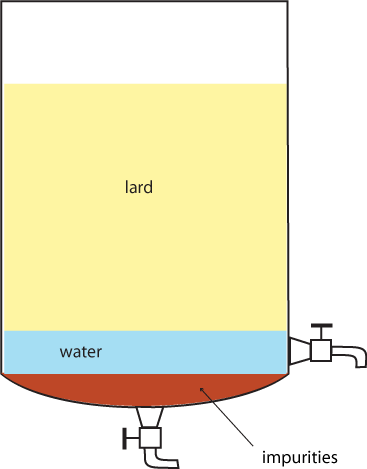 The best settling tanks were equipped with two faucets: one on the bottom for draining water and impurities, and another faucet about one inch higher on a side of the tank for draining lard.

A. Let the lard to settle for 1-2 hours in the settling tank. The water and solid impurities will settle at the bottom and they will be drawn off first. Now, the lard can be drawn off into containers which should be kept on ice to cool faster.

B. (Second option). Allow lard to settle in a tank for 1-2 hours and draw off the water and impurities. Stir lard with a large paddle until it is creamy and thick and then place into buckets or jars. Such lard will have a better presentation than lard that was poured into containers hot. Cool the containers. 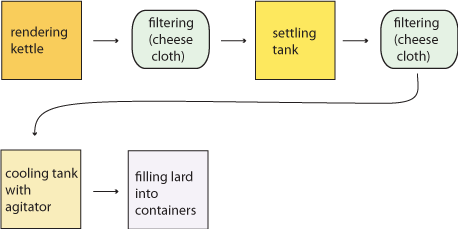 In hot climate lard may be too soft to handle. The problem can be corrected by mixing pork lard with 10-20% of beef tallow (rendered beef fat) or adding stearin*. Both ingredients are available on internet. You can make your own beef tallow from beef suet and beef fat trimmed from steaks, and other cuts. Grind and render beef fat using the outlined above lard making procedure.

Mix all components together and agitate before placing in containers. If no agitator is available, mix by hand until it is creamy and thick as before. Fill stiff and cool compound lard into containers.