Russian industry produces wonderful smoked hams and sausages. Russian meat technology books which were published after the war were incredibly detailed and original. Curing meats was superbly covered, including Wiltshire bacon, which is English method for curing 1/2 pigs. It must be remembered, that Russia was heavily damaged by the wars: World War I, 1914-1918 and World War II, 1939-1945. About 22 million people died, the industry was destroyed and the animal stock was depleted. The West did not offer any help, contrary, it tried to dispose of a new system. The country was struggling alone. There were no refrigerators for ordinary people until around 1965-1970 and the same problems persisted in Poland and other Eastern bloc countries. This lack of refrigeration forced the meat industry to come up with different ways of processing meats and sausages. The sausages were always popular, even before 1914, however they were reserved to the aristocracy. Those privileged groups demanded nothing but the best and this is exactly what they got.

The solution for preserving meats was to cure them, smoke and dry them, until they would be safe to consume. The Italians may be credited for inventing salami, but no country in the world has produced so many dry sausages as Russia did. They may as well be called salamis as the process was exactly the same, except that the Russian dry sausages were always smoked. As all Soviet bloc countries shared the technology, the same sausage making methods were applied in Poland. All meats for sausages were always cured with salt and potassium nitrate, and only then processed. Sausages were kept in household kitchen pantries or were hanging from the nails. A piece of sausage was cut away or broken off as needed. In addition, curing meats produced a peculiar “curing flavor” and imparted strong pink color to the meat. As water binders, phosphates, liquid smoke, and curing accelerators were not commonly used yet, the quality of those meats and sausages was better than anything produced today.

Russian meat products are classified into Sausages and Cured and Smoked Meats. The variety of products is huge and different animals and birds are utilized. In majority of European countries or Asia pork is selected, very often with a non-meat filler material. Russians like to mix pork with beef which creates a very pleasantly flavored sausage with a darker color. And similarly German or Polish products almost all Russian sausages are smoked. 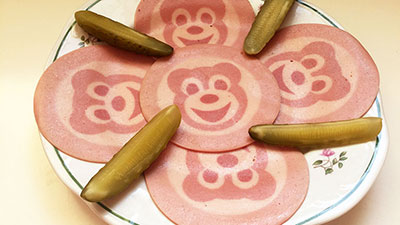 Fancy stuffed sausages require a lot of experience and dedication. Materials of contrasting color, for example, cubes of white hard fat and dark red meat work well. Then, blood is often utilized as it will provide dark background. Meats cured with nitrite will be pink, uncured meat becomes gray, beef will be dark red, pork lighter red and chicken pale. Larger diameter sausage or meat loaf will work best. The attached image shows a happy face bologna which is of course popular with children. 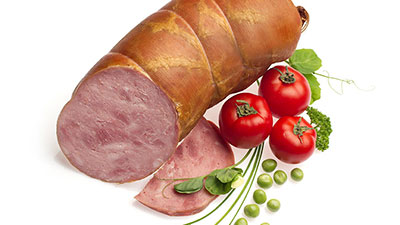 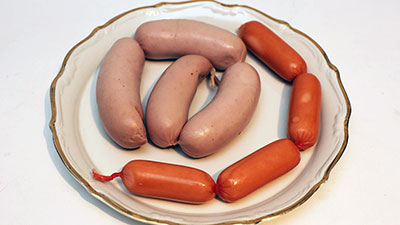 These are small plump sausages similar to quality wieners or frankfurters which were made from quality materials like veal in the past. Not to be confused with a mass produced hot dog.

Fermented uncooked sausages such as Italian dry salami or Spanish chorizo type of a dry sausage belong to this group. 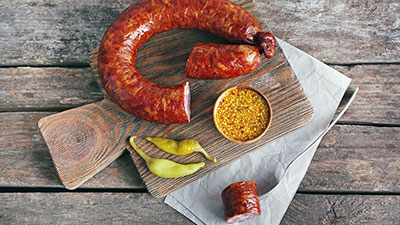 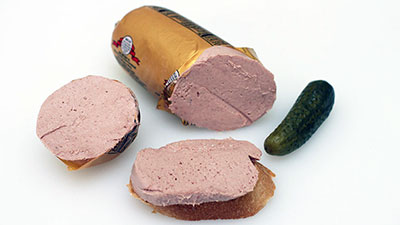 Usually sliceable sausage that can be spread as well, however, not as soft as liver paté. 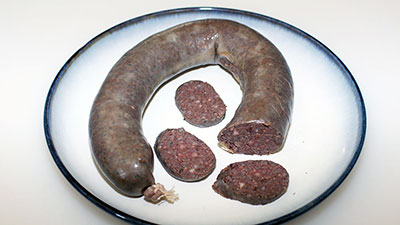 Blood sausages need no introduction as they are one of the first sausages made in history. Blood head cheese is a Russian sausage that is made like head cheese, but instead meat stock or gelatin it includes 20-30% of blood. It is a red-colored solid sliceable large diameter sausage. Adding filler material like buckwheat groats, barley, rice or wheat rolls to blood sausages is less common although there are some sausages with groats or wheat flour. 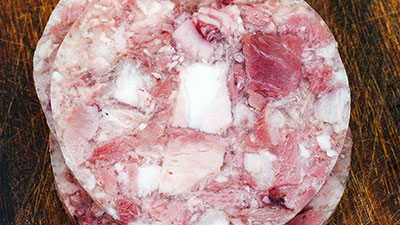 Head cheese is a dense meat jelly stuffed into a large diameter casing. The amount of meat stock or gelatin added varies, but is less than in meat jelly. 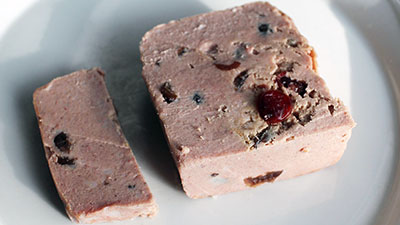 These are quality spreadable liver sausages that may be stuffed into casing or left in a mold. 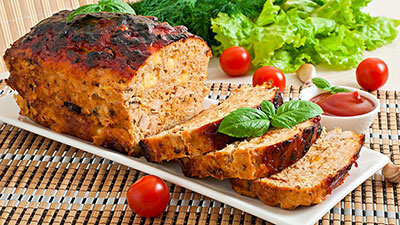 Meat loaves were usually made with minced meat and wheat rolls or bread crumbs. 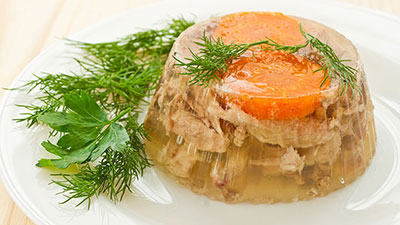 Head cheese made with more of meat stock and stuffed into a casing becomes a kind of meat jelly. Meat jellies are not stuffed into casings but cooked in a form. After cooling down and solidifying they become meat jelly. They can be made of variety of meats, chicken and fish included, decorated with hard boiled eggs and vegetables, and they can be thickened with natural meat stock or dissolved in water commercial gelatin. 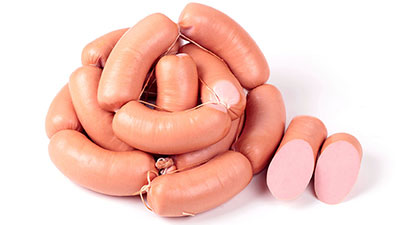 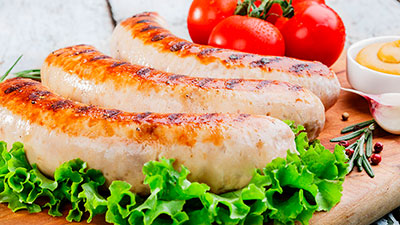 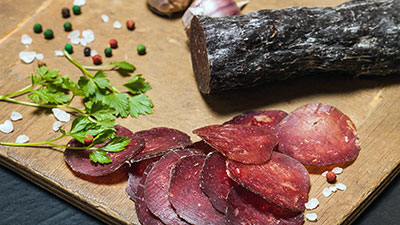 Consuming sausages from horsemeat is still common in Russia and in European countries for example Belgium or Poland. Horses are raised in Spain and then processed in Belgium. It is fairly easy to obtain in Poland a Belgian horsemeat version of the one of the most popular Polish sausages. 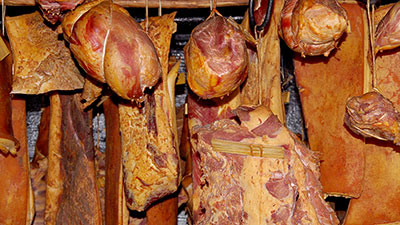 This section encompasses variety of products such as hams, loins, tongues, bellies, roulades, salt pork fat and others. Most products will be cured and smoked, some only cured, others just dried.

Russia is a huge country and not only poor peasants lived there, but the tsar and the aristocracy as well. Until the Russian Revolution in 1917, there was no significant meat industry in Russia. There were small slaughterhouses operating from badly equipped and often unsafe buildings. Most of them were in large industrial areas, far away from animal raising farms. There was little industrial refrigeration, no refrigerated train cars and animals were driven or transported over large distances. Poultry was transported and even exported live as there was no poultry processing industry. The outbreak of World War I in August 1914 only added to the chaos in Russia. As the war dragged on, the economy was breaking down under strains of wartime demand. The stores did not have bread, sugar or meat and the situation was tragic. The Tsar Nicholas was blamed for everything and his regime had crumbled in 1917, one year before the war ended.

The Russian Revolution brought an immediate change. Under the Soviet State rule a large meat industry has developed. In December 1929 the state has issued a set of directives “Measures for Solving Meat problem” that laid foundation for the meat industry. Plans were drawn for raising animals on state collective farms, known as “kolkhozes” (plural) along with state owned farms known as “sovkozy” (plural).

The construction of meat plants and canning factories began in 1931 in Moscow, St. Petersburg (formerly Leningrad), Baku, Semipalatinsk, Orsk and in many republics and regions were animals were bred on a large scale. Minced meat and ready to eat processed meats have appeared as well as a great assortment of sausages and canned meats.

The success of this prospering industry was abruptly brought to the end by the outbreak of the Second World War in 1939. This war which ended in 1945 has caused enormous losses to the industry with most industrial plants destroyed. The agriculture was not spared and losses of animals were staggering: 7 million horses, 17 million cattle, 20 million pigs and 27 million sheep.

After the war ended extensive measures to develop kolhoz and sovkoz farms were reintroduced. Between 1953 and 1962, there is a fast growth in agriculture and the meat industry. In 1966 the Soviet Union had about 700 meat plants and over 200 canning factories. During this period the state invested heavily into building new plants and education and training. Thousands of meat technologists soon graduated and dozens of quality books were published. Russian meat technology books which were published after the war are incredibly detailed and original. The subject of meat curing was described in Russian books better than any in any other Western publications of that era.

Until the system collapsed in 1991, Russian and Polish hams and sausages were the best in the world. They were also standardized and manufacture of processed meats was controlled and enforced by the state meat inspectors. The particular sausage, for example Russian Tourist or Neva sausages, looked and tasted the same regardless of where they were made. And adding chemicals was not permitted.

There are hundreds of Russian sausage recipes and it would be impractical to list all of them on one page, but the most popular ones are listed below: