A fractionating distillation column is the best solution for making strong alcohols. Such a column can produce pure 95% alcohol in one operation. A fractionating column contains a number of plates or trays which function as the containers in the above drawing.

1. The vapor enters the bottom of a long column (fractional distillation column) that is filled with trays or plates. Both terms describe the same thing. The trays have many holes or caps in them to allow the vapor to pass through. Industrial columns can be 10 meters (30') high with 1 m (40") diameter and they are equipped with 30 trays. Such distilling columns produce alcohol 24 hours a day. Smaller enterprises employ a simpler one tray design which is enough to produce a good quality brandy, gin or vodka. Regardless of the size, all fractionating columns operate on a principle called the external reflux. Reflux refers to the portion of the condensed liquid that returns to the upper part of the fractionating column.

2. The vapor rises in the column. There is a temperature difference across the column (hot at the bottom, cool on top). As the vapor rises through the trays in the column, it cools and becomes liquid that accumulates in the trays. The hottest vapor is in the upper part of the column and escapes to the condenser where it cools and liquefies, becoming alcohol. There is one problem: as the column gets hotter and the trays start to boil, all liquid will soon evaporate and the flow of vapor will be unobstructed. It will run up through the neck of each tray towards the condenser where it will become weak alcohol. Without boiling liquid in each tray, the column becomes just an empty pipe and we end up with a one stage alembic apparatus. The external reflux design keeps the trays always flooded with liquid alcohol. What follows is the detailed operation of the reflux column with bubble cap trays. 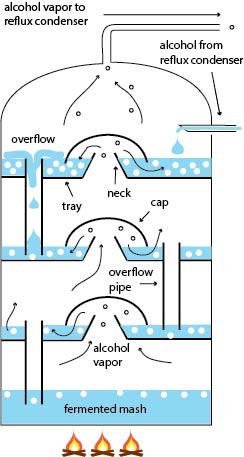 A. The mash starts to boil and alcohol vapors start moving. The vapor rises through the neck of the first (lowest) plate, hits the bubble cap, condenses on its walls and becomes liquid. Some of this vapor remains in its gaseous state and heats up liquid on the first shelf increasing its temperature. As the liquid starts to heat up on the first plate it produces a vapor which now contains more alcohol and less water than the first vapor which originated from the mash.

C. The vapor which was generated by the second shelf finds the way towards the liquid on the third (top) plate. It releases some of its heat and helps to boil the liquid. This liquid contains more alcohol and less water than the liquids on the second and the first plate. The alcohol rich vapor rushes towards the reflux condenser. There hot vapor makes contact with the cold condenser and becomes liquid alcohol.

There are two designs of the plates:

Bubble cap. The discussion for clarity was limited to one cap in a plate, big industrial plates of 1-2 meters in diameter carry many caps. The caps are very effective in distilling mashes which tend to be thick.

Sieve plate. Another design which is cheaper and simpler to produce is the perforated screen design which works well with thinner mashes, such as sugar or molasses. If the pressure drops, the screens will drain the liquid and the column will not work until the pressure comes back to normal which takes time. Hundreds of 2-3 mm (1/8") holes are drilled in a metal plate. The plate also has a little pan onto which goes an overflow tube. The plate must be covered with boiling liquid in the same manner as the bubble cap described earlier. The reason the liquid does not drain through the holes is due to the pressure from the vapor which enters from below. If the pressure drops too much the liquid will drain away. The holed plates are continuously supplied with reflux alcohol from the reflux condenser. Columns fitted with plates are capable of producing a lot of alcohol and are beyond the reach of a small operator. Firstly, it is hard to believe that a person needs to produce gallons of pure alcohol every hour, secondly the pipes become 30 cm (a foot) or wider, very tall and heavy. Thirdly, to boil a huge amount of fermented mash we need boilers which are capable of generating plenty of steam. A typical house does not have enough current to operate such equipment and will have to be rewired.