Lard has always been an important cooking and baking staple in cultures where pork is an important dietary item, the fat of pigs often being as valuable a product as their meat. During the 19th century, lard was used in a similar fashion as butter in North America and many European nations. Lard was also held at the same level of popularity as butter in the early 20th century and was widely used as a substitute for butter during World War II.

Toward the late 20th century, lard began to be regarded as less healthy than vegetable oils (such as olive and sunflower oil) because of its high saturated fatty acid and cholesterol content. Despite its reputation, lard has less saturated fat, more unsaturated fat, and less cholesterol than an equal amount of butter by weight. Unlike many margarines and vegetable shortenings, unhydrogenated lard contains no trans fat (the consumption of trans fats increases the risk of coronary heart disease). It has also been regarded as a "poverty food". Many restaurants in the western nations have eliminated the use of lard in their kitchens because of the religious and health-related dietary restrictions of many of their customers. Many industrial bakers substitute beef tallow for lard in order to compensate for the lack of mouthfeel in many baked goods and to free their food products from pork-based dietary restrictions.

In the 1990's and early 2000's, the unique culinary properties of lard became widely recognized by chefs and bakers, leading to a partial rehabilitation of this fat among professionals. This trend has been partially driven by negative publicity about the trans fat content of the partially hydrogenated vegetable oils in vegetable shortening. Lard has become popular in the United Kingdom among aficionados of traditional British cuisine. This led to a "lard crisis" in early 2006 in which British demand for lard was not met due to demand by Poland and Hungary (who had recently joined the European Union) for fatty cuts of pork that had served as an important source of lard. Lard is one of the few edible oils with a relatively high smoke point, attributable to its high saturated fatty acids content. Pure lard is especially useful for cooking since it produces little smoke when heated and has a distinct taste when combined with other foods. Because of the relatively large fat crystals found in lard, it is extremely effective as a shortening in baking. Many chefs and bakers deem lard a superior cooking fat over shortening. 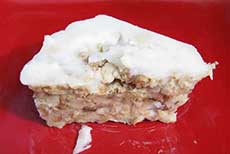 No, this is not a cake. It is a homemade lard that tastes as good as a cake.

Lard consumed as a spread on bread was once very common in Europe and North America, especially those areas where dairy fats and vegetable oils were rare. 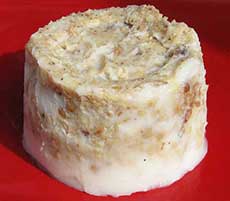 Pie crusts made with lard tend to be more flaky than those made with butter. Many cooks employ both types of fat in their pastries to combine the shortening properties of lard with the flavor of butter. Butter consists mostly of saturated fat and is a significant source of dietary cholesterol. For these reasons, butter has been generally considered to be a contributor to health problems, especially heart disease. For many years, vegetable margarine was recommended as a substitute, since it is an unsaturated fat and contains little or no cholesterol. In recent decades, though, it has become accepted that the trans fats contained in partially hydrogenated oils used in typical margarines significantly raise undesirable LDL cholesterol levels as well.

A higher proportion of monounsaturated fats in the diet is linked with a reduction in the risk of coronary heart disease. This is significant because olive oil is considerably rich in monounsaturated fats, most notably oleic acid. Lard contains more monounsaturated fats than butter or tallow. Lard is one of the great products that is largely misunderstood today and has developed an undeserving reputation as an unhealthy product. To set the record straight we have listed some USDA data and statistics about lard and other animal fats.

The conclusion is simple: pork fat (lard) is much healthier than butter or tallow (beef or sheep fat). Save on butter, eat more lard and you will live longer.

When the II World War ended in 1945, lard was the main staple in every household for these reasons: