The consistency of crèmes and sweet liqueurs are thicker. This is obtained by introducing:

Dutch Advocaat has been known all over the world. Advocaat includes a small amount of rum and cognac, but this is enough to give it a distinct flavor. This crème owes its popularity to: 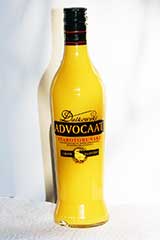 The Polish equivalent called ajerkoniak (Eier - egg in German, Cognac - French for brandy) is based on vodka instead of brandy, despite what the name may suggest. This is a simple and more economical version of Advocaat. Originally, it was made in a baked clay bowl known as "makutra" that was used for grounding poppy seeds or sugar with egg yolks to make pastries and cakes. It may be considered a large "mortar and pestle" set, where the mortar is the clay bowl and the pestle is a heavy wooden club with a ball at the end. The set works surprisingly well and has been used for centuries for grinding materials into paste. 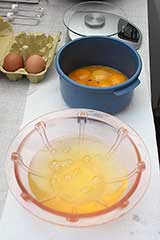 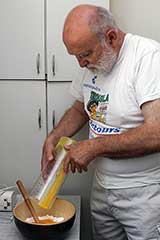 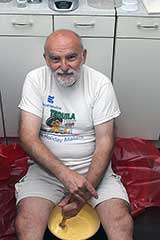 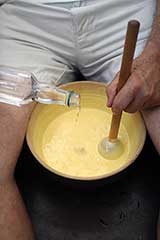 When eggs and sugar become paste, the alcohol can be slowly added. 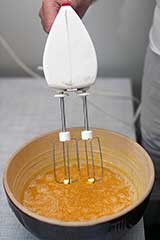 Your tongue should not feel any particles of sugar, the cream must be completely smooth. Then alcohol is slowly added and the mixture is continuously stirred. Adding alcohol rapidly may break down the emulsion.

Let us make something absolutely clear, an electric mixer will not make a better egg crème than a manual "makutra." The saving is only in time and in ease of operation. Having used both equipment on many occasions, I am inclined to say that "makutra" makes much smoother crème. Keep in mind that vanilla pods are impossible to grind, they tend to remain little rubbery pieces. Use vanilla extract instead.

Take your time with an electric mixer. Do not assume that the mixture is smooth, operate the mixer for at least 5 minutes. You can use sugar syrup which will produce a thinner mixture. Add another egg yolk to compensate. Occasionally a layer of white foam will appear on top of a freshly made crème. These are the tiny air bubbles that were formed during mixing but will disappear the next day.