Snook are one of the most prized fish to inshore fishermen. They put up a great fight and sometimes can be quite difficult to catch. Their most recognizable characteristic is a black line alongside its body from their gill plates to the tail. 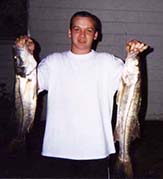 Snook can be found in Florida’s Atlantic and Gulf waters, the Gulf coast of Texas, and as far south as Brazil. They are a warm tempered fish that prefer a water temperature over 80° F. When the water temperature is over 80° F, snook are much more active and they feed more. When the temperature is cooler, they become sluggish and lazy. In the winter when the water is cold, they are thought of as in hibernation mode and barely move. In the winter they work their way into canals and inlets where they bury themselves in mud in an attempt to try and stay warm. When the water warms up snook are found swimming and feeding in most coastal waters.

In the winter of 2009 - 2010 Florida had seen colder temperatures than usual. The water temperature was below normal and unfortunately killed many gamefish throughout the state. As snook like warm water temperatures, many of them were not able to survive the cold winter. As a result the Florida Fish and Wildlife Conservation Commission did not open the snook season as normal. On June 9, 2011 the FWC decided to reopen the snook season in Florida’s Atlantic waters including Lake Okeechobee and the Kissimmee River. The restrictions on keeping snook are one per day that has to be between 28 - 32 inches. Snook found on the Gulf coast, the Everglades National Park and Monroe County state and federal waters are catch and release only, until August 31, 2012.

Snook can tolerate a wide range of salinity levels and are found in saltwater, fresh and brackish water. They have a very mild fish taste and are delicious grilled, broiled or fried. Snook feed on smaller fish, shrimp, crabs, and an assortment of artificial lures. The problem is they won’t always try to eat the bait. Snook are often seen at dock lights. A fisherman can cast his bait past the light and let it swim towards the snook, or reel it by. Many have observed the snook pay no attention to their bait and this is how the snook obtained its reputation of being a smart fish. We don’t understand how the snook knows not to eat the bait, but somehow it is aware.

The Florida State record for largest snook was 44 lbs 3 oz. This is an exceptionally large snook, they are most commonly caught at between 2 - 3 feet weighing around 5 - 10 pounds. They have a nice firm texture with very white meat. The snook is a solid fish producing very thick fillets, there is plenty of meat there.