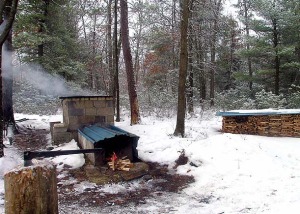 How to make sausage is a popular search query which is answered by many websites on the internet, however, they usually limit the discussion to making fresh sausages, which are the simplest to make. Many websites on the internet list hundreds if not thousands sausage recipes, however, the recipes call for a ready-made supermarket sausage which is then mixed with rice, noodles, beans and other materials, becoming de facto a food dish but not a sausage recipe.

The goal of our website is to cover not only basic sausage making skills, but to offer instruction on making more advanced meats like fermented and dry sausages, liver sausages, head cheeses, vegetarian sausages, smoked meats and fish, fermenting sauerkraut, making liquors, canning and building smokehouses. In Smokehouse Plans we offer advice and ideas for making meat smokers and smokehouses. Our recipes section lists over a thousand sausage recipes which include a brief description of each sausage, all ingredients and detailed instructions on how to make it.

Why Make Sausages at Home?

Well, the answer is very simple: because you cannot find them anymore. Do not confuse a minced and spiced meat that is stuffed into a casing and ends up on a grill with a great sausage. Any fresh or commercially produced smoked sausage will taste fine when grilled, but try to eat a cold smoked sausage, it is almost non-edible. Yet you could smell the aroma of a traditionally made smoked sausage before you even tale the first bite. The mass-produced product has only the looks of the sausage, but not the taste or flavor. The era of buying good quality sausages in the USA is coming to an end. To get a great sausage one must buy one that carries a European certificate of origin, buy a sausage from a dwindling number of remaining European stores or make one for himself.

The art of making sausages originated in Europe and was brought to the USA by immigrants in the last century. German, Polish and Italian butcher shops were in every major city and offered a variety of wonderful meats and sausages. Most butchers known for producing great sausages operated in large cities like New York or Chicago and were profitable because the immigrant sausage makers bought the buildings when the prices were low. They did not pay the rent, that simple. Besides, in the past, the large supermarkets did not carry as many cheap sausages as today. A local sausage maker supplied the whole neighborhood with quality products. It was his life, he put his heart into it and staked his reputation behind his sausages.

Unfortunately, the original owners have been dying out and their sons and daughters do not want to continue the family tradition. They do not want to get up at 3 o’clock in the morning to start the day. The kids who inherited the business sold the buildings at a profit or rented the store out. As a result, many sausage making facilities ceased to exist. This trend is not limited to the USA but it happens in Germany, Spain and in other countries. In many areas the sausage making shops were sold by the original and highly trained European butchers to people who looked for an investment opportunity. They continued to make a few simple sausages but bought more difficult ones to produce from large producers at wholesale prices. The guys who knew sausage making were early immigrants who completed the government required sausage making curriculum that lasted for years. In Europe you could not just open a sausage making business because it seemed a profitable idea. You had to earn the stripes by completing prescribed courses and then learning the trade by working as an apprentice in an established sausage making shop.

In the USA there are no questions about what you know about nitrates, curing meat, safety procedures, nothing of the sort. All you need is to rent a place that conforms to food safety standards as prescribed by the local health department, submit the plan, and start making sausages. The easiest and fastest way is to buy a distressed food establishment like a restaurant or deli shop which already has a hood, grease trap, three compartment sink, wash sink, proper walls, ceiling, lights, and toilet approved.

A person sold a contracting business in Chicago, moved to Florida and bought a sausage making kitchen from the owner who was getting too old to run it. The irony is that often the previous owner hardly knew what he was doing himself. Another guy got tired of cutting meat in a supermarket so he bought a grocery store with a little kitchen in the back and started making sausages. So how do they get away with it? Well, those guys make basically fresh sausages only - a fresh sausage is a spiced hamburger meat stuffed in a casing. It needs to be fully cooked before serving so there is no question about safety. Some of these establishments carrying to Eastern Europeans may offer a blood sausage which is easy to make and highly profitable as it is filled with buckwheat groats, barley, oats, rice or bread. Those stores may carry one or two smoked sausages, but sausages such as liver sausages, head cheeses or salami are bought at wholesale price from more established producers. Stores located in different states for example in Florida or Las Vegas, Nevada buy sausages from manufacturers in Chicago. The reason is that most German and Polish immigrants settled down in Illinois, Wisconsin or New York.

Large meat processors employ professionally trained meat technologists and could easily make great quality products; however, this is not what they are supposed to do. Here, the entire strategy is based on increasing profits in order to satisfy the company’s shareholders. It is a business. Those mass-produced sausages contain countless additives and ingredients to make sausages look pretty and last as long as possible, otherwise supermarkets will not renew the order. The term Polish Smoked Sausage means nothing, the name is used for marketing products and to dupe a customer into believing he is buying the real thing. Except for the shape and diameter of the casing, such sausage has nothing in common with Polish traditional sausage.

Fortunately, anybody can make great sausages at home today. The purpose of Meats and Sausages is to preserve the traditional knowledge of sausage making and food preservation and to provide information on creating quality products without the use of chemicals and unnecessary additives.