The discovery of distillation is generally attributed to Arab alchemists in VIII century Spain. From then on medicinal syrups were made with stronger alcohol. The actual process, however, was kept secret until 1286, when Montpelier University professor Arnold de Villeneuve described the first distiller. He is credited with discovering this wonderful "fountain of youth"; the drink that was the answer to all problems. Even today, many agree with his theory, which may explain the quantity of spirits we drink regularly. The magic drink was known as "aqua vitae" (water of life) or "aqua ardens" (water of fire). This corresponds to the description of whiskey by American Indians who accepted the wonderful tradition of intoxication from Europeans. They simply called it "firewater." 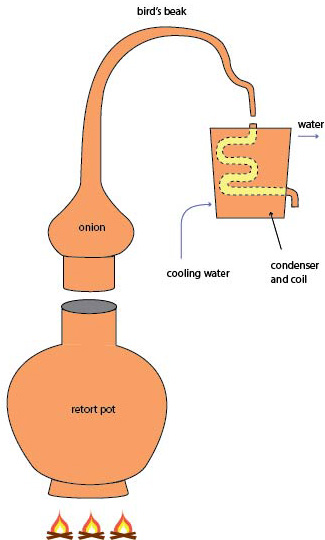 The early Arabic distillation device that came to be known as alembic. 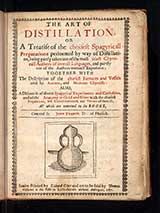 The Art of Distillation, Composed by John French, Dr. of Physick, London, 1651.

A quote from the book:

How to Make Aqua Vitae and Spirit of Wine out of Wine
Take of what wine you please. Put it into a copper still, two part of three being empty. Distill it with a worm until no more spirit comes off. Then this spirit will serve for the making of any spirits out of vegetables, but if you would have it stronger, distill it again and half will remain behind as an insipid phlegm. And if you would have it yet stronger, distill it again, for every distillation will leave behind one moity of phlegm or thereabouts. So shall you have a most pure and strong spirit of wine.

The surprising fact is that today the majority of amateur distillers use exactly the same configuration for making moonshine at home. The principles of distillation that John French described 400 years ago are still applied by many amateurs today which can be seen in the photo below. From that time on tinctures were made with stronger alcohol. Those first alcohols were distilled from fruit wines which made them expensive and beyond the reach of commoners. 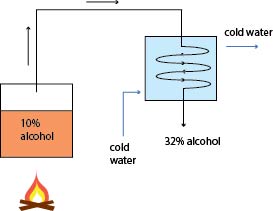 The traditional pot still produced alcohol of about 30% and to make a stronger spirit, the operation had to be repeated many times. The next breakthrough occurred when we learned how to obtain sugar from sugar cane and beets. Cane plantations had mushroomed all over the Caribbean islands and Europe had fallen in love with sweet food. Expensive honey was replaced with cheaper cane sugar and we started to enjoy our herbal remedies. Once we had discovered how toobtain sugar from sugar beets which grew well in cold climates, the price of sugar plummeted lower and sugar became available to all. Alcoholic drinks became sweeter still, and we started to drink more. Then, we learned how to prepare barley, rye, wheat, rice and potatoes for making alcohols and many new types of drinks such as vodka, gin, rum and whiskey appeared.

Until XIX century alcohol was crudely distilled using the same equipment that Arnold de Villeneuve described in 1286. This produced 35% strength alcohol with poor flavor, however, the flavor was masked by adding sugar and herb extracts. In order to obtain alcohol stronger than 60%, the process had to be repeated many times which largely increased the costs of production. In 1817 Johannes Pistorius, German brewery owner, designed a modern distiller that could produce 85% alcohol in a single operation. His design had started a revolution in distilling equipment design and nowadays we can produce high quality 96.8% pure alcohol in a single operation.

We knew how to make wine 10,000 years ago. It was most likely discovered that when certain fruit was left unprocessed, its properties would change and the fruit would have a different taste. The discovery of alcohol was a gift from the Gods and that explanation made sense. Countries located around the Mediterranean basin were the first ones to discover the art of fermentation and they possessed the right combination of easy to ferment fruits like grapes, figs, and dates. The warm climate allowed the creation of new drinks which established a trade. While the Italians are credited with creating different types of wine by adding herbs and spices, Persia, Egypt and China were familiar with wine making as well. 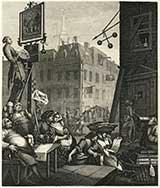 Let's make something clear; we have been drinking very weak spirits for most of our history. Wine is obtained through the fermentation process where yeasts that are naturally present in fruit convert sugar to alcohol. Once the level of about 16% alcohol is obtained, the yeast die, period. Their work contributes to their demise; they are on a suicide mission; the alcohol they create kills them. Wine was served at any occasion as it was a social drink that was taken up for pleasure. Beer was another alcoholic drink like wine dating back to the beginning of our time. The moment we knew how to harvest barley we probably discovered how to make beer. The strength of beer was usually around 4-6% alcohol by volume so it was also a weak spirit. 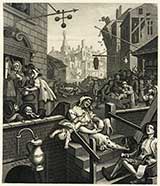 Herbs and spices were always of great importance in the preparation of alcoholic beverages. The main reason for adding herbs and spices to alcoholic drinks was for the benefit of their medicinal powers. Wine was considered an excellent vehicle for administering an herbal drug, since it extracted more of the active ingredients than a simple water infusion. In addition, alcohol in wine preserved the mixture from spoiling. One of the best known old digestive drinks was a cordial wine known as hippocras - the name is derived from the Greek physician Hippocrates. Its Latin name was Vinum Hippocraticum - wine of Hippocrates. It was made by inserting a mixture of spices such as cinnamon, cardamom, grains of paradise (a species in the ginger family), and long pepper, in red or white wine sweetened with sugar or honey. At this time most oriental spices were so expensive that only nobility were able to drink hippocras. One of the best known ancient hippocras was wormwood wine, a bitter tonic prepared by steeping a handful of wormwood (Artemisia absinthium) in red or white wine. Hippocras was a medicinal bitter drink that was supposed to stimulate the digestive juices, expel flatulence and prevent colic. Hippocrates recommended absinthe for jaundice, anemia, rheumatism and menstrual pains. The hippocras of Medieval and Elizabethan times were rather syrupy tinctures, originally sweetened only with honey. Man has been making tinctures for thousands of years, but the first ones were produced not for the pleasure of drinking but for medicinal purposes. Those early extracts were made with wine and herbs, occasionally with honey, and being generally bitter they did not generate much following. It took us more time to discover how to make drinks that can make us drunk faster. That discovery is known as the process of distillation.