Fido jar is a glass storage container with large opening. Lid is closed down with a metal clamp and vulcanized rubber provides an airtight seal. Those jars were always popular in Europe and were used for canning and storing foods. A good fermenting container is able to release air and pressurized carbon dioxide to the outside and prevent the outside air from coming in. A water channel clay crock or glass jar can do it easily. Sauerkraut made in the least expensive jars is as good as the one made in the most expensive ones or fermenting clay crocks.

It is all about keeping out the oxygen.

Many people swear that Fido is the best jar for fermenting, so let’s see if this is the case. 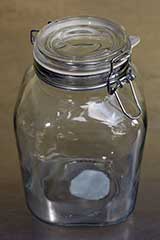 Fido jars can be square or round. 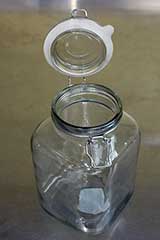 Fido jar is a storage jar. It is capable of fermenting cabbage (any container is), however, it has some shortcomings. The locking pressure of its clamp varies from jar to jar. Ideally, the expanding gas should push out the air through the rubber gasket, but what happens if the clam locked the lid very strong?

Lactic acid bacteria will keep on producing more and more carbon dioxide (CO2, soda gas) which will expand in volume. The rubber gasket will be pressed by the locking clamp so much that the gas and the air will not be able to escape. The air will be forced to remain inside and the molds may start to grow. A lot will depend on whether the cabbage is fully submerged in brine, and how much air and molds are available. If glass jar if of a large size, the glass may crack under pressure.

This will never happen in a fermenting crock or a glass jar which are under constant pressure of the outside air. This is the maximum pressure that presses down on water in a channel or in the air lock. The air lock could become clogged with food if the jar was overfilled; but the gas pressure will push out the rubber grommet.

It is hard to predict how much pressure locking clamp applies to the vulcanized rubber washer. Some Fido jars are beautiful and expensive, others are cheap imports with easily breaking clamp. So, to make the story short, Fido jar can be used for fermentation, however, its operation is not as predictable as that of a fermenting jar with air lock. Adding a little oil may be a good idea as the thin layer of oil on top of the brine will keep away any air that may be present.