Currywurst sausage is to Germans what Hot Dog is to Americans. In New York hot dogs are sold with ketchup, mustard or sauerkraut on every street corner, in Berlin currywurst is served with "curry ketchup." Currywurst is all about the sauce and not the sausage. Currywurst sausage is defined not by the ingredients which are inside of the sausage, but by the addition of curry sauce during serving. This means that one can choose bratwuurst, bockwurst or any sausage like Polish smoked sausage, and as long as it is served with "curry flavored ketchup" it qualifies to be called Currywurst. As they are different types of curry and different types of the sauce produced, considerable variations occur between sausages. An estimated 800 million servings are sold in Germany each year.

Currywurst can be found everywhere: in Berlin, Hamburg and the industrial Ruhr Area, it is sold by street cart vendors, small restaurants or served at home.

Currywurst is usually served on a paper tray and a little wooden or plastic fork is provided.

Currywurst is served with a roll, bread or french fries.

It is All About Sauce

In 2001 a commercial version of currywurst sauce was introduced by Meica. This brought currywurst sauce to a general consumer. Ready to use curry ketchups and sauces are sold in supermarkets.

The simplest way to make currywurst sauce is to mix curry powder with tomato ketchup according to your own liking. Then sauce is poured over grilled sausage, which is usually sliced into smaller pieces. You can add some Latin flavor to the sausage by adding cilantro, garlic, lemon juice and some cayenne pepper.

Due to the popularity of the sausage, in 2010 "Currywurst Museum" was opened in Berlin. The place attracted hundreds of visitors every day.

The following information has been adapted with permission from the Currywurst Museum in Berlin:

"On the 4th of September 1949 Herta Heuwer got down to work, it was a rainy day, so business was slow and she had time on her hands. Determined to conjure up something really for her guests, she took her newly acquired spices from the shelf, adding ingredient after ingredient to the dark tomato paste, thoughtfully tasting and making notes. Ten or twelve spices were to her liking. Herta Heuwer tasted again and a smile lit up her face. The next day she heated up the sauce, poured some over a well-fried sausage and proudly served the worlds's first currywurst."

The currency reform of 1948 brought rapid price increases, and shortages were still widespread. A pioneering spirit of inventiveness was the mood of the time, and the lifestyle and eating habits of the occupying forces brought new influences. In 1949 Herta Heuwer, the owner of a fast-food stand in the British sector, began experimenting with ingredients bought from British soldiers. She is considered the inventor of the currywurst.

Herta Heuwer gained her first fast-food experience directly after the war, selling snacks from a hawker's tray. In 1949 she bought an old van for 35 marks and converted it with the help of her husband and brother-in law. She put her heart and soul into selling her special curry sausages and turned out to be an adroit enterpreneur. After just a few months she was able to open a second stand nearby. Up to nineteen staff worked there round the clock. At its height the stand was selling 10,000 servings per week. She later opened a small restaurant which operated until 1974. Marta Heuwer withdrew from running the business for health reasons in 1974, shortly after its 25th anniversary. 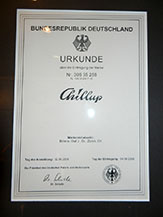 Currywurst quickly became Germany's favorite fast-food. A friend who loved the sauce persuaded Herta to secure the rights to her recipe. Her "Chillup" sauce (from "chili-ketchup) was registered in January 1951 at the Patent Office in Munich (Patent Number 721319). The name and logo are still protected trademarks today. Herta Heuwer guarded the secret of her recipe for the rest of her life, even rejecting an offer from a major sauce manufacturer. After her husband Kurt died in 1987, she destroyed all documents relating to her invention. TV presenter Harald Schmidt rewarded Herta Heuwer's determination, inviting her to his show to receive a "first-class secret-keeper" award. Other German TV stars had her on their shows, and her story made the TV news too.

The easiest way to make currywurst sauce is to combine tomato ketchup with curry powder according to your own liking. Commercially produced Currywurst Sauce or Currywurst Ketchup is available on Amazon.

Pour tomato sauce into a preheated skillet.
Add all ingredients and mix them together.
Bring to a boil, reduce heat and simmer for 5 minutes.

Fry/broil/grill sausage on each side until brown and cooked.
Slice sausage into 1/2 inch thick pieces.
Pour curry sauce over hot sausage
Serve with a bread roll or potato fries.