The purpose of preserving food by canning is to use heat often with other means of preservation, to kill or inactivate all microorganisms and to package the product in hermetically sealed containers so that it will be protected from recontamination. Meats can be preserved for a long time without any loss in quality, ordinary temperatures have no effect on them. Fats or sausages become rancid in time even when kept in a freezer. Canned meats are less prone to such problems. Canned meats are immediately ready to serve and can be taken on outdoor trips, contrary to frozen foods that have to be thawed out first. Animals and insects cannot force their way through the can or the jar, so the safeguarding of food is easier. Pork, beef, poultry, fish, wild game and dishes that contain those meats can be successfully canned in glass jars or metal cans and stored for up to one year for best quality. They will, however, still be edible in 2-3 years. Either fresh meat or frozen meat may be used for pressure canning. Up North where hunting is a part of daily life, many Alaskans freeze their game meat for up to one year. Then the meat is preserved using the pressure canning process. This gives meat an effective shelf life of two years. 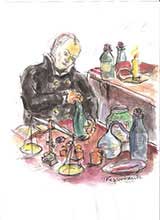 Napoleon used to say that the army marches on its stomach. The staple of a soldier was salted meat, stale bread and whatever fresh food he could pick up as he moved along. The wars had an effect on the common people as well and food shortages were rampant. The government strongly believed that the condition of both the army and the civilian population would be greatly improved if only a better method of preserving food would be developed. To this effect, in 1795 the French military offered an award of 12,000 francs to a person who could come up with a practical solution. Nicolas Appert was a confectioner and chef in Paris from 1784 to 1795. He had great skill with foods and was also familiar with brewing and distillation. He set up a small kitchen in the back of his shop and decided to answer the challenge. For ten years he labored patiently with different foods, cooking them in different ways and trying to preserve them. There was no scientific papers that Nicolas Appert could draw upon in his food experiments as bacteria would be discovered by Louis Pasteur fifty years later.

After many experiments Appert concluded that air was the cause of food spoilage and he tried to remove as much of it as possible. Neither glass jars nor metal cans were around yet and Nicolas Appert had to use bottles. Those being narrow were ill suited to fill with food so Nicolas designed his own wide mouth bottles, which looked like glass bottles that were used for daily milk deliveries later on. A cork was used to seal the bottle. It took Appert fifteen years to perfect his method and after many experiments he arrived at the correct times for many foods. The method he developed does not vary from our present canning techniques, the difference being mainly in equipment and a better understanding of the process that we possess today. The method that Appert developed involved:

After fifteen years of experimenting and sending his canned products all over the world for testing, Appert presented his notes to the French government. On January 30, 1810, the Minister of Interior informed Appert that after careful examination of his process the prize money is awarded to him. His findings were compiled in a little book called ìLíArt De Conserverî - "The Book for All Households or the Art of Preserving Animal and Vegetable Substances for Many Years". A new word "appertization" became synonymous with processing foods using a hot water bath. In his process Appert used large quantities of sugar, salt and vinegar as preserving agents. It should be emphasized that although Appert has invented the canning method, the cause of spoilage of food was still a mystery. Canning was more of a curiosity topic for scientists than a practical invention for the general public. Many scientists of the day tried to explain his process without much success. The best conclusion was that air combined with food in a sealed bottle and in some mysterious fashion this magical combination prevented the spoilage of foods. It was universally agreed that the process worked and the ignorance apart, this canning method was employed for the next 50 years. In the coming years both the understanding of the process and better equipment led to the ever increasing popularity of canning. What follows is the timetable of canning history.

1795
French government offers award for a new method of food preservation.
1810
Nicolas Appert invents canning method and wins the award and prize money.
1810
Peter Durand of England, receives patents for glass and metal canning containers.
1820
First canning plants start to operate in Boston and New York.
1823
A can with a hole in the top is invented.
1824
Nicolas Appert develops a schedule for processing 50 different foods.
1840
The tin container is in widespread use in the USA.
1851
Chevalier Appert (son of Nicolas Appert) develops the pressure cooker.
1860
Louis Pasteur discovers microorganisms.
1864
First Pacific salmon is canned.
1870
About 100 canning plants operate in the USA.
1874
An American, A.K. Shriver of Baltimore invents commercial steam pressure retort.
1883
The Norton Brothers Company of Chicago invents semi-automatic can soldering equipment.
1890
Prescott and Underwood from Maine canneries, Russell in Wisconsin, and Barlow in Illinois discovered the relationship between thermophillic bacteria and the spoilage of canned food.
1895-1900
The science of bacteriology is applied to canning.
1899
Campbell produces first canned condensed soups.
1901
Norton Brothers merges with 60 other firms to form the American Can Company (123 factories).
1906
The Chemical Laboratory of American Can Company is established.
1909
Tuna fish is first canned.
1910
The basic biological and toxicological properties of Clostridium botulinum are discovered.
1920's
Bigelow and Esty established the relationship between the acidity (pH) of foods and the heat resistance of bacterial spores. This determination laid the foundation for the classification of canned foods into acid foods and low-acid foods.
1920
Citrus fruit and tomato juice are canned.
1920
Charles Olin Ball (1893-1970) develops thermal death time studies which become the standard for the United States Food and Drug Administration for calculating thermal processes in canning. After earning his PhD from George Washington University in 1922, Ball would work with the American Can Company in Illinois and New York where he earned 29 patents. He would work at Owens-Illinois Glass Company during 1944-1946 before going to Rutgers University as a professor and later chair of the food science department during 1949-1963.
1940
Canning plants operate throughout the USA.

In the USA canning became popular due to its shelf keeping properties, but in Europe it was a necessary survival skill. Many countries throughout history were involved in continuous wars which left buildings, stores and infrastructures destroyed. After the second world war ended in countries such as Poland or Germany many cities were 80% destroyed. People could not buy food in stores because there were no stores. What was left was rubble and piles of bricks. All that people could do was buy food at farmer markets and preserve it by canning for later use. If items such as tomato paste, wine, sauerkraut, pickles, pickled mushrooms, canned meats, or lard were not processed in the summer, there would be famine in the winter time. As refrigerators were not common, the food was canned and stored in root cellars or kitchen pantries.