Infusions are alcoholic drinks that are made by pouring alcohol over fresh or dried fruits, sometimes herbs and spices, in such a proportion that the finished product contains about 40% (80 proof) alcohol. Infusions contain all substances that fruits contain, such as vitamins, minerals, acids, sugars, pectin, aromatic oils, color agents and others. All those compounds are extracted and preserved by alcohol.

Some infusions include many herbs that are credited with medicinal properties and such infusions are considered to be medicinal tinctures. Alcoholic cough syrups that are sold in pharmacies are tinctures. The alcohol contained in tinctures immediately dilates the blood vessels in our body and those healing substances enter our system. One can legally make flavored vodka or infusions at home, contrary to whiskey, rum, gin, cognac and other strong alcoholic spirits which require distillation. Home distillation is either prohibited in most countries (USA, Poland) or is tightly controlled (Austria). Infusions offer many benefits because they are made with fruits, vegetables, herbs and spices. On the other hand there is no nutritional value in plain spirits like vodka, except maybe in widening the blood vessels, a fact which is generally recognized. There is no official standard for making infusions so one is not limited to the strength of alcohol or the amount of sugar it carries. They can be produced from any fruit at any desired strength. This creates unlimited possibilities for a creative person who can create drinks of many flavors and colors.

Flavored Vodkas and Infusions - The Difference

There is not much difference between fruit vodkas and infusions, except the fact that vodkas are finished off to contain 40% alcohol. Fruit vodkas and infusions are made by mixing alcohol, fruit juices, sugar and flavorings together. The composition of infusions is not as precise as that of vodka or liqueur. In traditionally made home infusions all ingredients are placed in a glass jar and left to macerate. Besides shaking the jar or stirring fruit, there is not much work required for the first 4 weeks. This also means that we have to wait quite a while until the infusion is ready to be served. On the other hand vodka can be drunk the next day. Making an infusion can be considered the first part of the vodka making process. Such infusions are made with fruit and alcohol only, they are filtered and bottled for future use. Sugar is not added as it will prevent using the infusion for making dry vodka. Using this line of reasoning we can see there are two types of infusions:

Alcohol and fruit (or fruit juice) infusion. Such infusions become a raw material for future use. When it has been filtered and becomes clear, we can easily estimate its alcohol strength. It can be added to dry vodkas, sweet vodkas or liqueurs. Herbal infusions fit into this category as well. Having a selection of ready to use popular aromatic extracts/infusions such as vanilla, nutmeg, cinnamon, cloves, star anise, lemon skins and orange skins greatly simplifies the work and makes it possible to make a new spirit in a matter of minutes. Alcohol, fruit and sugar infusion. Such infusions are ready to drink products, but their usefulness as an ingredient for making other spirits is severely restricted. It can be called fruit vodka and have a wonderful taste, but it is hard to calculate what really sits inside of it. The alcohol that was added, how much sugar was added, and the amount of juice that was released by the fruit is anybody's guess. It is hard to estimate its alcohol content. We can't use a sweet cherry infusion if we want to produce dry cherry vodka. There is a difference between distilled natural fruit vodkas, and spirits and infusions. The main difference is infusions are made by pouring alcohol over raw materials such as fruit, herbs, spices, and sugar. This alcohol has already been distilled in a commercial brewery, the tax has been paid and the government does not care whether you give it to your friend, add it to your lemon tea or make a flavored drink. You can use pure 96% alcohol (192 proof), 75% alcohol (150 proof), 40% (80 proof) vodka or any alcoholic drink like rum or brandy to make your own drinks.

On the other hand, plain vodka, pure alcohol, rum, brandy, and whiskey are spirits made from the fermented must that is distilled in licensed factories. In addition to plain vodkas, there are commercially manufactured flavored vodkas that are made similarly to home infusions. Alcohol is diluted with flavor essence and water and fruit flavored vodka is produced. The tax is levied on the bottle before it leaves the plant for distribution. At home, you can make wine or beer (no distillation is needed), but it is illegal to distill a drop of alcoholic spirit. This does not mean that one cannot own distillation equipment. You can distill your own water or herbal extracts, as long as you don't produce alcohol.

The taste, smell, clarity, and color are all qualities that make infusion superior to plain vodka. One drinks infusion for pleasure, plain vodka is usually taken just to get drunk. Even when vodka is mixed with orange juice, soda, or made into a cocktail, it does not even come close to the beauty, flavor and aroma of a properly made home infusion. In addition to containing all the attributes of vodka, which is just a mixture of alcohol with water, infusions deliver a subtle flavor of fruits, herbs and aromatic spices. Honey is often added and different infusions are mixed together for an even more striking effect. This can be compared to sherry wine, which is a mixture of different wines. Moreover, with the careful selection of fruits and ingredients, infusions can be produced in a variety of colors and strengths. They can be dry, semi-dry, sweet, weak, or strong.

Pouring vodka over fruits, as some books advocate, and drinking it 3-4 days later has little to do with the art of preparing infusions. Such quickly produced drinks are no different than plain vodka that is mixed with fruit juice. The result is a cloudy mixture that just kicks your head. Infusions or fruit vodkas will taste great, that we can take for granted. However, they still have to look pretty and be presentable.

Infusions are judged by a panel of experts, similar to a wine contest; they are evaluated by clarity, aroma, taste and flavor. Making top quality infusions is an art form that takes knowledge, time and patience.

Ratafia is a liqueur or cordial flavored with lemon peel, herbs in various amount typically combined with sugar. 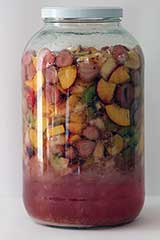 Ratafia infusions have been popular in Poland for centuries. What separates them from other fruit infusions is that ratafia is meant to be a combination of at least two different fruits, sometimes as many as a dozen. Homemade ratafias were made according to a certain ritual:

There are many conventions and trade fairs and this contest is often one of the main attractions. People submit their creations, whether they be infusions, vodkas or liqueurs in hopes of winning prizes and recognition. At the 7th Annual Sausage Makers Convention that takes place in August in Poland there were 40 entries. The bottles were wrapped with aluminum foil and a panel of six judges was selected. The judges are chosen among people who are known for their life-long commitment to heavy drinking and their thorough knowledge of the subject. The spirits were evaluated by color, clarity, flavor and aroma. After two rounds of drinking the judges selected three finalists. Some of the spirits were so good that it was hard to choose the winner. This only reinforces the point that you don't need factory equipment to create outstanding spirits, and the truth is that factories cannot create drinks to match the quality of those created by a dedicated homeowner.

Bottles are wrapped with aluminum foil for blind testing.

The judges at work.