The Mystery of Polish Sausage - What is Kielbasa?

Without a doubt the word “Kielbasa” has worldwide recognition yet it is just one of many wonderful meat products that have been produced for centuries in Poland. It is also often misunderstood. Kielbasa is the Polish general name for “a sausage”. You can not walk into a Polish store and say: “please give me a pound of kielbasa”. The sales lady surrounded by 50 different kinds of kielbasa will inevitably reply: “yes, but which one”? It is like going into a deli and asking for some cheese. Sure, but which one: American, Provolone, Swiss, Gorgonzola, Gouda, Muenster - you have to provide some details.

As the most popular Polish sausage is without a doubt Polish Smoked Sausage, (Polska Kielbasa Wędzona) we are willing to speculate that this is what people have in mind. This is probably what the first immigrants brought with them to America. The little problem we face here is that you can find Polish Sausage in almost every supermarket in the USA and no two are made the same way. The Polish Smoked Sausage has been well defined for centuries and almost everybody in Poland knows what goes inside.

We do not intend to become judges in this matter. Instead, we are going to rely on Polish Government Standards for Polish Smoked Sausage as those rules have remained unchanged for the last 60 years. This way if any reader does not agree with our recipes he is welcome to contact the Polish Meat Industry in Warsaw, which still publishes the latest standards for meat products and sausages through the Polish Bureau of Standards (Polski Komitet Normalizacyjny).

Before we anger many people who have been making Polish Smoked Sausage in their own way for many years, let’s clarify something further. If you add an ingredient that you or your children like into your sausage it is fine and you have the full right to say that you have made a better sausage than the famous Polish Smoked Sausage. You may say that your grandfather who came from Poland made the best Polish sausage in the world and we honor that. Maybe he used chicken stock instead of water or maybe he added something else.

What we are trying to say is that he was making his own version of the known classic or some other Polish sausage and it could have tasted better for you and your family. We do not dispute that fact. You can of course add anything you like to your sausage, but it will no longer be the original Polish Smoked Sausage (Polska Kielbasa Wędzona) or another sausage. Once you start changing ingredients you create your own recipe and you may as well come up with your own name. Let’s unravel some of the mystery:

For curiosity sake let’s see how large American manufacturers make Polish Smoked Sausage. Four sausages called Polish Kielbasa were bought at the American supermarket and each of them were produced by a large and well known meat plant. Let’s see how they compare with the original Polish recipe.

Looking at the above sausage recipes we tried to come up with a name of an equivalent Polish sausage that might fit the description but we couldn’t. It becomes quite clear that different manufacturers put different ingredients inside of the casing and the name Polish Kielbasa is used just for credibility and to gain the trust of the consumer. It seems that for some manufacturers any sausage that is smoked and stuffed into a 36 mm casing will qualify to be called the Polish Smoked Sausage or Polish Kielbasa. 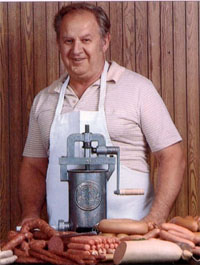 Many books were written about sausages and each one provides some Polish sausage recipes. And they were all wrong but....one book had it right. The book, considered a classic today, was The Great Sausage Recipes and Meat Curing, written in 1976 by a Pole, Rytek Kutas from Buffalo. Later Mr. Kutas created the Sausage Maker Inc, the biggest mail order (now also selling on line) company specializing in sausage making supplies.

Then came the book "Polish Sausages, Authentic Recipes and Instructions" which listed all official Polish sausages and how they were made by Polish meat plants.