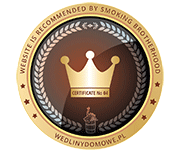 In November 2004, a Pole, Miroslaw Gebarowski, became so dissatisfied with the deteriorating state of Polish meat products that he decided to do something about it. He started a Polish forum on the Internet dedicated to the proper methods of meat preparation and the idea took off like a roller coaster. Little he imagined that he would create one of the most popular sites in Poland and the biggest site of this kind on the Internet.

At that time Stanley Marianski lived in the USA and one day at a party he was arguing with his friends over some Polish sausage recipes. He jumped on the Internet and started to look for more information but the information he got in English was far from satisfactory. Finally in desperation he formed the question in Polish and imagine the surprise when he found his answer on the newly created forum. That started the relationship that continues to this day. The Forum became so popular that in February 2005 its web presence was established www.wedlinydomowe.pl (Polish version) and the English site www.meatsandsausages.com was created in July, 2005.

And as of this writing (November 2011) the Wedliny Domowe is the biggest site of this kind in the world. Due to a popular demand it carries information on bread, cheese and butter making as well. The explanation for this incredible popularity of the site was the general dissatisfaction of the people with the steady decline in quality of once great meat products. The main reason was the opening up of Polish borders (after the collapse of the Communist system) to Western Europe. This brought previously unknown chemicals and preparation procedures to Poland, which were designed to produce meat products in the fastest and cheapest way. From the manufacturer’s point of view, the most important step is to pump as much water as possible into the meat. They think of it as a win-win situation; it’s good for profits and healthy for the consumer. Every doctor says we should drink more water, so why not eat it as well? We like water ourselves, but we hate paying five dollars a pound for it.

Our group consists of hundreds of professional and home based sausage makers who have been making those Polish products all their life. They know how they were made and how they tasted 50 years ago and they can see the difference when they buy the product today. Another reason is to preserve the centuries of knowledge and tradition that were instrumental for the development of so many wonderful products. We are simply people that love making sausage and other meat products the right way. Unfortunately this is a dying art and there is almost no way to obtain quality products unless they are home made.That does not mean that our meat plants are not capable of making quality products. After all, in 1969 we put a man on the moon, the internet has been running for 25 years, and computers allow us to change the very rules of nature. So why can’t we make a decent sausage? We can’t because everything is controlled by the dollar, including sausages. They must be made in the most efficient manner, and that means cheap and fast. As long as supermarkets accept these products, and the Food and Drug Administration does not object to the ingredients, quality plays a secondary role.

As lady meat technologist discusses a freshly made sausage a young sausager is trying to figure it out. 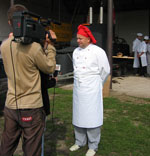 An interview with a TV station. 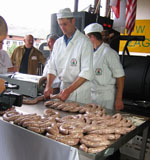 The conventions atract people from all walks of life from workers, businessmen, housewives, doctors, amateur and professional sausage makers. They all have one thin in common - they like good food which is prepared in a traditional way.

To get a feel of what happens during 3 days of festivities, please visit our latest 2013 convention.