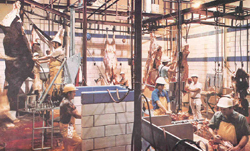 Imagine a butcher cutting pork into smaller meat pieces until nothing is left on the table. Before he can carve out a ham from the leg he has to separate it from the body, then cut off the lower leg, remove the bones, tendons, gristle, sinews, skin, pieces of fat etc. To get a clean piece of meat like a ham, butt or pork loin a lot of work has to be performed first that leaves scraps of meat which can not be sold in one piece. Keep in mind that the meat plant was established to bring profits to its owners, and every little piece of meat, fat, and blood included is money.

A commercial recipe does not call for pork butt, lean ham or beef chuck. The recipe asks for pork class 1, beef class 2 or back fat class 1 or 2. It may call for jowl or bacon fat. It really does not matter whether this meat comes from ham, butt, picnic or from the container with little meat pieces as long as it fulfills the requirements of the recipe. Only after all those scraps of meats are depleted, then a meat plant may resort to using noble parts such as ham or loin for sausages. All those trimmings end up in a cooler in labelled containers. Names such as ham, picnic or butt lose their meaning as one can only see cuts of meat with different fat contents. They have to be classified in some logical manner so they can be picked up from a cooler by any operator and transferred to production.

Professional butchers carving meat. The same can be accomplished at home as shown in the following photos.

Roman says all he needs is an axe, knife and a pig. As the above picture depicts a kitchen table will do just fine.

If you trim like Paweł  you will be in total control control of what goes inside of your product. Most good recipes specify how much lean, semi-fat and fat meat should be used.

All Polish sausage recipes call for meat that belongs to a specified class: I, II, III or IV. When making a few pounds of a sausage we can use names like ham, butt or picnic, but when a meat plant makes thousands pounds of sausages a day a different system is employed. It takes a lot of knife carving to obtain meat cuts like loins, slabs of bacon, butts, hams or ribs and a butcher segregates remaining scraps of meat into corresponding piles called classes.

Understanding meat classes will help you when shopping for better deals at a local store. Instead of studying in detail a label you will study the meat cut itself to see what quality or meat class it represents. When trimming pork chops, loins or ribs for roasting, save all those remaining meat pieces by placing them in a freezer. They will make fine sausages at a later date. When trimming pork butt, save the skin and fat for later use in a head cheese or liver sausage.

Ham (rear pork leg). You can obtain all meat grades from pork leg.

Pork loin is the leanest cut of all and definitely Class I. It is also expensive and ends up cooked or smoked in one piece.

Class II A, no bone, medium fat, some tendons. Fat between muscles up to 10 mm. No more than 30 % fat. Pork butt, also known as Boston butt. You can obtain all meat grades from pork shoulder.

Class II B, no bone, some tendons. Fat between muscles up to 10 mm. No more than 45 % fat. Pork picnic (pork shoulder). You can obtain all meat grades from pork shoulder.

Class III, lean or medium lean, with many sinews. No more than 25 % fat. Pork picnic, legs, other cuts. Picnic is a good substitute for pork head meat when making a headcheese.

Harder fat with meat in it. A good substitute for pork jowls/dewlap are fatter cuts from pork butt (class IIB).

Hard fat, good for sausages and for making lard.

Hard fat, good for sausages and for making lard.

Jowl fat remains bacon but it contains more connective tissue so it is harder.

Looking at meat class III that contains a lot of sinews one can develop the feeling that it is a poor kind of a scrap. After all who wants to chew meat with sinews. The truth is that this is a very important meat class as it contains a lot of collagen which is necessary for creating gelatin and binding meats together when making head cheeses or liver sausages. It also binds water very well making products juicier.

Knowing meat classes will also help you immensely when shopping for better deals at large supermarkets. You will see what quality meat you will be buying, regardless what’s on the label. Next time when trimming pork chops, loins or hams for roasting, save all those little meat pieces and put them into a freezer. You can use them to make sausages at a later date. Or when making sausages from pork butt, save the skin and fat for later use in a head cheese or liver sausage. When carving ham or butt you will get all meat classes, of course in different proportions. Picnic which is mainly class III, will also provide class II or even a piece of meat class I. It is a good substitute for pork head meat. You have to use your own judgement, for example trimmed pork loin is a very lean cut of meat and definitely class I. It is also expensive and most of us would not use it for making a sausage.

There are different types of fat and they will all be used but for a different purpose. There are hard, medium and soft fats and they have a different texture and different melting point. There is a: bacon fat, back fat, dewlap fat, jowl fat, kidney and casings fat and so on. Some head cheese and emulsified sausage recipes call for jowl fat that may be hard to obtain. From the photos it looks like bacon may be a good replacement but it is not. Bacon is a soft belly fat and dewlap/jowl is a hard fat. Fatter cuts from a pork butt are a much better choice that contain hard fat and meat (class IIB).

There are seven USDA Beef Grades: Prime, Choice, Select, Standard, Commercial and Utility, Non-graded beef and Natural beef. In addition there thirteen major steak names and a number of beef roasts. From a sausage making point of view all that is needed is the table that follows below:

Class I, no none, lean, no tendons. Fat between muscles-none. No more than 7 % fat.

Beef fat is a poor choice as it is yellow and does not taste good. People who refrain from eating pork beacuse of religion will choose beef or sheep fat, or even add some vegetable oil.