Making sausage is like making a hamburger - the meat is ground, salt, pepper and the required spices are added, and then it is cooked. If this prepared meat were stuffed into casings it would become a sausage. While various recipes usually get the spotlight (there are thousands on the Internet), the technical know-how behind preparing sausages is far more important.

These basic rules will dictate how to make your meal both delicious and safe. Basically, a sausage is meat, salt and pepper. Most sausages will include a dominant spice plus other spices and ingredients. The proper amount of salt in meat (tastes pleasant) is between 1.5-2% and 3.5-5% will be the upper limit of acceptability; anything more and the product will be too salty. There is less room for compromise when making fermented sausages where salt is used as a safety hurdle to prevent the growth of bacteria in the first stage of processing. Dry sausages require about 3% of salt and semi-dry around 2.5%.

Usually, most home sausage makers omit the curing step. This can be attributed to the lack of information available on curing meats for sausages. Most recipes on the Internet cover fresh sausages only which are very simple to make and don't require meats to be cured. A commercial plant might avoid the traditional way of curing meats in order to save time and space but they make up for it by injecting larger cuts with curing solution or adding salt, nitrite, and curing accelerators during meat chopping and mixing. As a result the meat is still cured although using different methods. For example, a frankfurter which is a smoked sausage is cured, smoked, peeled and packed in about 30-45 minutes. 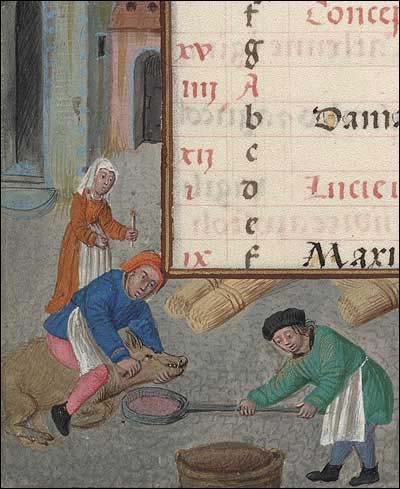 Probably the oldest illustration depicting pig slaughtering in 1420 Europe. A man dressed in blue cuts the throat of a hog with a knife, his helper dressed in green collects the blood and the lady holding the candle prepares to start the fire in a smokehouse in the back. In practice they will save the best meats for eating, hams will be cured in salt for two weeks and the rest will go for different types of sausages. Collected blood will be used to make blood sausages, heads and brains for headcheeses. A pig is the unique animal where nothing is waisted.

1. were the second animal to be tamed by humans
2. gained weight rapidly
3. ate anything
4. lived in cities and villages and ate garbage from the streets (they were Rome's first sanitation system)
5. fled to the forests during invasions where they flourished

Pigs are most importantly cheap to raise. They tasted great and no part of the animal was wasted. In the past, Europeans were sentimental towards cows since they produced milk and often worked on farms along with the horses. Even when a cow was killed in an accident, it was usually buried. There was a different attitude towards pigs; they were just meat to be consumed.

There are some exceptions to the above process

Sausage color depends on many factors but the main one is adding cure with nitrite. This guarantees the pink color of the finished product. Some sausages such as fresh sausage, head cheese, blood sausage or liver sausage are normally prepared without nitrite and the resulting color will be that of a cooked meat. Different meats exhibit different colors and a sausage containing beef will be darker than a pork sausage. A sausage containing more fat will be lighter than a lean one. Livers from different animals will create liver sausages of different color. Adding 20% of white tripe will make any sausage lighter. Use of dark spices such as black pepper, cinnamon or nutmeg makes sausages darker. The smoking process will affect the color of the sausage casing.

Although it is possible to manipulate the final color of the sausage, this is not what sausage making is about. We have to create a product that looks appetizing and tastes great. Nevertheless it is good to know that using white pepper is a smart choice when making light colored emulsified sausages.