Old Smokehouses were impressive structures that served both as meat smokers and as storage facilities. Communal smokers were responsible for supplying meat for many families. The same was true of bread ovens. They were far too expensive for one household to own, so many shared the same one.

The main purpose of the smokehouse was not to produce cold smoke to improve taste, but to preserve it so it will last for a longer period of time. Preservation was achieved by salt curing and prolonged smoking which took about 2 weeks or more, with cold smoke. The product continued to hang in a different area of the smoker, sometimes up to two years, and during that time it lost more moisture and acquired more smoke, although at smaller rates. The meats were not cooked to an internal temperature of 160° F (72° C) because that would require strengthening the fire and the smokehouse would fill with flames. Besides, nobody knew about the effects of food poisoning yet. During that time, the lack of refrigeration promoted smoking to state of the art meat technology. Given cooling facilities, sausages would have been cooked much like how they are nowadays, quickly. There would be no need to worry about the meat spoiling, and therefore no need to develop smoking techniques for preservation purposes.

The eastern part of Poland (what is now Lithuania) became very famous for its smoked products. There was a popular square tower shaped smokehouse with a side of 6.5 foot (2 m) and 20 ft (6 m) in height. The fire pit was located outside and a trench was delivering smoke into the smokehouse. The top part of the tower contained screened openings that provided ventilation and a means for the smoke to escape. Those openings had hinged covers on the outside and allowed smoke control by serving as a damper. Due to its height and a separate fire pit, the smokehouse was able to provide natural cold smoke. This is the best possible design for a smokehouse, and is reflected in hundreds of home made smokers or industrial units. They all employ a separately standing fire pit/smoke generator.

It is not easy to improve the simple but practical design of the XV-century smokehouses. They were square chambers, with a steep chimney in the shape of a pyramid. There were no windows, just a door and screened openings just below the roof to stop insects, provide ventilation and a route to allow smoke to escape. The door had a lock to safeguard the meats from thieves and animals. Below the roof there were beams with hooks where the meat was hung. The dimensions varied from 10 – 100 sq feet of floor space and 10 – 18 ft in height.

In some European homes a chimney was a part of the smokehouse. The simplest chimney design was climbing up on the roof and hanging meats on smoke sticks right on top of the chimney. The serious drawback was the meat had to accept any kind of smoke that the fire created in the wood stove.

Another solution was to attach a wooden box to the bread stove or any wood burning appliance.

A much better design was placing a proper smokehouse on the second floor. On the ground floor in the kitchen a fire was burning in a wood stove. On the floor above a smokehouse was attached to the chimney. Two holes were made in the chimney: one for the smoke to enter the chamber and another to allow it to escape. On the other side a flat damper was pushed in or out of the chimney allowing the smoke to go straight up or forcing it to flow into the smokehouse.

Very similar designs were used in XVIII Century Colonial USA. During the winter in Virginia, there were so many smokehouses puffing smoke around the clock that the sight looked like a stream of locomotives ready to take off at the station. However, the fire pit was situated in the central part of the smokehouse, sometimes right on the ground. The fire was started every morning and left unattended for most of the day. Nobody worried if it went out, as it would be started again the following morning. When cold smoking, such occasional breaks are even recommended.

That was the simplest but the most popular smokehouse design that depended on a natural draft. It did not permit temperature, air speed, or smoke density control. There was an uneven smoke and draft distribution and blind pockets were created. In addition, hanging products acquired more smoke and soot that the rest of the batch. To compensate for that the smoke sticks and screens had to be periodically re-arranged and hung at least 5 feet above the fire. After meats were smoked for about two weeks, they were hung in a different area of the smokehouse where they remained for up to two years. They received constant smoke, but with less intensity. Thus the smokehouse functioned as a storage facility at the same time. 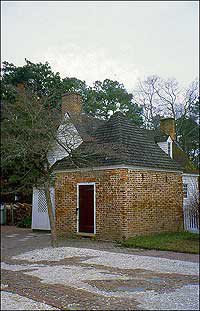 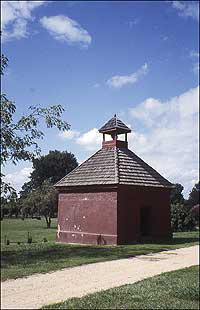 XVIII century smokehouses in Virginia. Those smokehouses doubled up as storage facilities where meats after being smoked for two weeks were kept inside for up to two years. 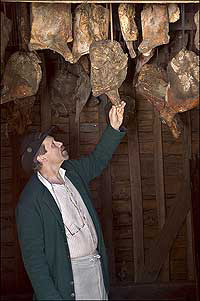 In the USA, smoking was more popular in the Eastern Parts of the country where slaves were working on tobacco and cotton plantations.The main reason was the availability and popularity of the hogs running around. Smoking and pork meat are like the left and right hands of the body.In the western parts of the country, cowboys transported cattle across large distances and looked down on any animal that wasn’t a cow or horse. The staple consisted of beef meat grilled on an open fire.

The Mark Monroe Pioneer Log Kitchen at the Museum of Appalachia in Norris, Tennessee. The kitchen, originally located in Mayanardville, Tennessee, was eventually converted into a smokehouse bu the Monroes. 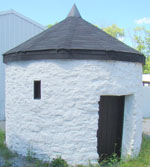 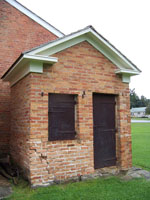