The main advantage of a water bath canner is that any large pot with a lid that is tall enough to accommodate jars is suitable for canning. Most water bath canners hold seven quart jars or eight to nine pints. Although pressure canners may also be used for processing acid foods (meat, fish, vegetables) boiling water canners are recommended for this purpose because they are faster. A pressure canner would require from 55 to 100 min. to process a load of jars, while the total time for processing most acid foods in boiling water varies from 25 to 60 minutes. A boiling-water canner loaded with filled jars requires about 20 to 30 min. of heating before its water begins to boil. A loaded pressure canner requires about 12 to 15 minutes of heating before it begins to vent; another 10 minutes to vent the canner; another 5 minutes to pressurize the canner; another 8 to 10 minutes to process the acid food; and, finally, another 20 to 60 minutes to cool the canner before removing jars.

Boiling water canners are used to process acid foods at a boiling temperature (212° F, 100° C). The boiling water temperature remains constant in a particular geographical location as the height of the air column above the canner regulates the pressure. At higher or lower altitudes, the height (and the weight) of the air column will change as well and there will be a different amount of pressure applied against the boiling water. At high latitudes there is a less pressure and consequently water molecules need less energy (heat) to break loose from the surface.

In a bath water canner the lid rests loosely on top of the canner. In a big pot like the one in the photo above, the lid is rather heavy. This means that there would be occasional build-ups in pressure inside until the pressure is strong enough to lift up the lid. This will push the temperature up by a few degrees. It is possible to process jars in a canner without a lid as at sea level the temperature of boiling water remains constant at 212° F, 100° C. However, there would be significant water loss due to evaporation and the jars might become uncovered. To compensate for that more boiling water will have to be added to the pot when needed. It is much simpler to use a lid. Foods which are processed by this method are: fruits, pickles, relishes, tomatoes, jams, jellies, preserves, marmalades, butters, syrups and honey. A water bath canner is a large covered cooking pot with a rack. It has to be deep enough to cover the jars with 1-2 inch of boiling water. The rack keeps the jars from touching the bottom of the canner and allows the water to circulate freely under them. A flat bottom must be used on an electric range. Either a flat or ridged bottom can be used on a gas burner. To ensure uniform processing of all jars with an electric range, the canner should be no more than 4 inches wider in diameter than the element on which it is heated. 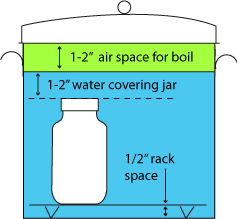 Canner, jar, rack and 2-inches water over the top.

Two layers of jars can be processed at once, as long as the canner is tall enough. Place a small wire rack between the layers to facilitate the circulation of water. Make sure that there is at least 1 inch of water over the tops of all jars.

WARNING a water bath canner is not suitable for canning low acid foods such as meats, poultry, fish and vegetables.

There is a negligible amount of information on Spanish sausages in English, and even the Spanish books offer only a few recipes with general information, very skimpy instructions and hardly any explanations. "Spanish Sausages, Authentic Recipes and Instructions" fills this void and the readers will know not only what is a chorizo, longaniza, salchichón, fuet, morcilla, butifarra, salchicha, sobrasada, fiambre, androlla, butelo, morcón as well as many others, but also learn how to make each sausage. Of special interest is a collection of 200 recipes which were chosen for their originality and historical value. The book is a highly recommended addition to personal and professional culinary additions.