The purpose of the comminution process is to cut meat down to the required particle size. The typical machines are:

Dicer cuts into uniform size cubes that may be used in many dishes or specialized sausages. For example Polish Krakowska sausage is done with visible chunks of meat. It is very unlikely that a hobbyist will need such a machine as he can perform the same function with a sharp knife. 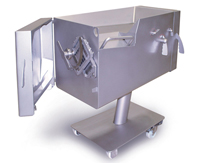 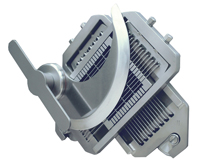 Grinder is the most popular machine that has been around for a long time. There are many commercial brands on the market and some units can grind and mix at the same time which saves time and space. They differ mainly in their output capacity. Grinder as the definition implies, grinds meat and pushes it through the plate, it does not produce a perfectly clean cut. There is a large amount of pressure on meat in the feed chamber. This leads to tearing between the auger and the walls of the chamber. As a result the meat is not cut as good as with a bowl cutter. This will be more pronounced when the knife is blunt. 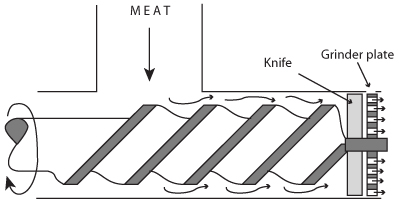 It is much easier to grind cold meat taken directly out of the refrigerator. Ideally, meat should always be chilled between 32-35° F (0-2º C) for a clean cut. The fat should be partially frozen or a smeared paste will be produced. When a recipe calls for a second grind, refreeze the first grind and then grind it again. When making emulsified sausages, this operation may be repeated 2-3 times. 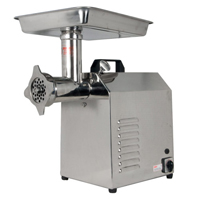 Electric grinder for light commercial use. Some grinders come equipped with an easy to assemble attachments for the mixer or chopping machines. Grinding output from 34 lbs per min and up, depending on product type, feed rate, plate hole size, etc. Photo courtesy Sausage Maker, Buffalo, NY. 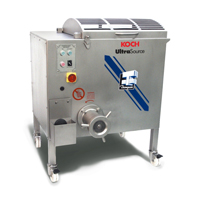 At home the manual grinder is the machine of choice.

#22 and 32 size grinders are heavy enough to rest on the table but they are usually clamped to it. All of the above grinders employ a variety of accessories, such as grinder plates, knives, stuffing tubes, jerky attachments, and more. 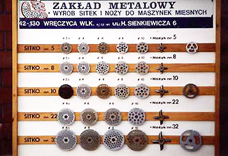 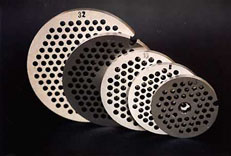 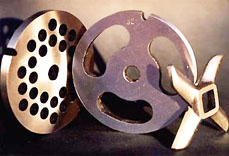 There is an optional plate (with three big holes) that is used to initially break up the meat into smaller pieces. These pieces will be cured, and then ground again through the appropriate plate. 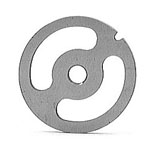 Spacer. Knife and grinder plate are always removed for stuffing. It is a good idea to insert the spacer, although not absolutely necessary.

To keep meat smearing to a minimum, the knife should be perfectly aligned with the plate. Always send them together for sharpening.

All of the above work fine, but for grinders, the bigger the better. Bigger models have a larger throat, and they will grind the meat faster. However, they are also heavier, more expensive, and require more space to store. The knife must be sharp, otherwise the meat will smear. The process will come to a stop as the connective tissues will wrap around the knife preventing further cutting. The locking ring on a grinder head should be tight. After a while the meat will lubricate the grinder and the crank will begin to turn with ease. Bear in mind that the grinder, whether electric or manual, generates heat and if it were washed in hot water, it should be cooled off before use.

Home grinders come in the following sizes: 8, 10, 22, 32, number 10 being most popular. It is a fine general purpose grinder for making smaller amounts of sausage. If you think about mincing 20 lbs. of meat or more get #32. It has a bigger throat, bigger knife and bigger plate diameter. If the recipe calls for a large grinder plate like ¾” and you don’t own it, dice meat with a knife, this is how we made sausages in the past.

What grinder to buy?

Although an electrical machine looks impressive, the question to ask is how much meat are we going to process? Manual grinders are wonderfully designed and very efficient machines which are very inexpensive. On the other hand, small home type electrical models cost more and work twice as fast at best. The only difference is that you don’t have to exercise your hand for 5 minutes. To get any significant output (50 - 100 lbs. per minute) you have to buy a big industrial model which is heavy and expensive. It is our personal opinion that it is wiser to invest extra money on a quality piston stuffer and grind meats manually. These are general estimates for the output capacity of different grinders:

The majority of recipes on the Internet ask for between two and five pounds of meat. This means that most people use less than one pork butt (around 6 lbs.) of meat. Number 32 manual grinder will perform this task in 1½ minute. Number 10 grinder will do it in 2 minutes. An electrical model will be faster but what’s the hurry? If you plan making 50 pounds of sausage, yes, you hand will get tired and the electrical model is a logical choice.

Bowl cutter - also known as buffalo chopper or silent cutter, cuts meat very finely and is a must have machine for commercial production of emulsified products such as bologna or hot dog.

Both the speed of the turning anti-clockwise bowl and rotating knives is adjustable. The stainless steel bowl turns about 14-16 times per minute and the knives rotate about 3,000 times per minute. 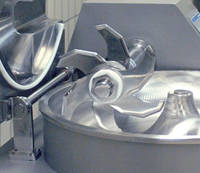 The resulting friction generates so much heat that the meat will boil and cook. To keep the temperature down the flaked ice is added to the mixture. As the meat is finely comminuted, a lot of protein is released which in combination with salt and phosphates can easily absorb melting ice and resulting water. The mixture becomes a fine paste which after stuffing becomes hot dog, bologna or any emulsified sausage. 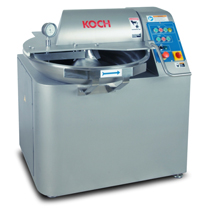 The bowl cutter can be employed to make any kind of a sausage except fermented or air dried products. Technology of making these products is based on the removal of moisture therefore adding ice to the mixture will jeopardize the safety of the sausage.

The fat is usually ground through a plate with very small holes and if it is not partially frozen a smeared paste will be produced. The locking ring on a grinder head should be tight and the knife must be sharp, otherwise the meat will smear. Otherwise we would have meat smearing and the sausage will look greasy even when lean meat was used. Ideally, meat should always be chilled between 32-35°F (0-2ºC) for a clean cut. Since refrigerator temperatures are roughly 38-40°F (3-4º C), we should place the meat in a freezer for about 30 min just before grinding. In domestic conditions, we could choose to cut the meat either during the early hours of the morning, or during late evenings when temperatures are not higher than 70°F (21°C).

After we are done cutting the meat, we should separate it into different groups: lean, semi - fat, and fat. The lean meat should be separated from the fat. As a rule, lean meat is ground coarsely while fatty cuts are ground very finely. This way our sausage is lean-looking and the fat is less visible. It is much easier to grind cold meat taken directly out of the refrigerator. Then they should be placed back into the refrigerator. It is possible to purchase minced meat in a supermarket, just make sure it has been minced the day of the purchase. Such minced meat should be processed not later than the following day.

The question may arise, why do we grind different grades of meat through different plates? It will be much easier to use 3/8” plate for everything.

There are many reasons for it:

For hundreds of years we chopped meat with knives and stuffed it with fingers through a horn. And the sausages were great. Queen Victoria of England had her own very strict rules about making her sausages:

Some products require meats which are not ground but diced or cut with a knife. Theit texture displays solid chunks of meat or fat inside, including even nuts or olives. For example Mortadella is often made with pistachio nuts, some sausages contain whole peppers. Sopressata contains large pieces of fat inside. There are liver sausages that contain cubes of fat or ham sausages with solid chunks of meat inside. This is done for a decorative purpose only and such a sausage does not contain more fat than others. Were this fat emulsified with the rest of meat we would not be able to see it, though it would still be inside. 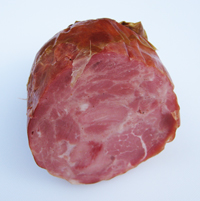 Krakowska sausage incorporates chunks of lean meat used as show material. The meat chunks must be perfectly lean and pork ham is a good cut for that. 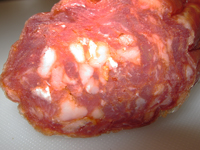