Cold smoking has always been a popular topic on any meat forum. It generates a heated discussion due to people having a preconceived opinion based often on incorrect information they had found on the Internet.

What is cold smoking?

Cold smoking is applying smoke at a temperature below the temperature when meat proteins denature (start to cook). Crossing this temperature hardens the texture and inhibits the removal of moisture. This happens around 86° F (30° C), which may be the upper limit for cold smoking. You will find that different sources provide different temperatures for cold smoking. In European countries where most cold smoking is done, the upper temperature is accepted as 86° F (30° C). The majority of Russian, Polish, and German meat technology books call for 71° F (22° C), and some best German books ask for 64° F (18° C) in their recipes.
Anything from 86° F (30° C) to 160° F (72° C) becomes hot smoking, although there is a less a popular gray area called “warm smoke” from 87-104° F (31 – 40° C). Sausages are often preheated in a smokehouse at 115-125° F (46-51° C) without smoke until the casings are dry or at least tacky to the touch. This is known as “conditioning.” Smoking at higher temperatures is not practiced in sausage production as it will create an inferior product. However, a few known sausages are expected to be baked in the smokehouse after smoking, and in those cases, the temperature is raised to 185-189° F (85-87° C), and thin smoke is allowed.

This is a myth; smoke provides flavor, but neither cold nor hot smoking is a method of food preservation. Cold smoking indirectly contributes to preserving meat by heating the meat’s surface. However, drying (removal of moisture) preserves the meat. United States Department of Agriculture (USDA) states: “ A potentially hazardous food does not include …a food with a water activity of 0.85 or less.” Water activity (Aw) indicates how tightly water is bound inside a product. It does not specify how much water there is, but how much water is available to support the growth of bacteria, yeasts or molds. It must be noted that applying smoke creates hostile conditions for the development of microorganisms; however, this effect is limited to the surface of the meat only. Drying is what preserves food, not smoking. The best definition of cold smoking is drying with smoke.

Why did we cold-smoke meat?

Pigs were slaughtered in Europe in wintertime. However, the harsh climate was why smoking became more popular in Northern countries. We can get 200 pounds or more of meat from a large pig, and a large part of that needs to be preserved. It was discovered that salted meat and sausages could be preserved after a long period of cold smoking. However, we did not realize yet, that not smoking but the heat from slowly burning wood was responsible for preserving meat. If we could place an electric heater inside the smokehouse, the meats would dry out and be preserved without smoke. There were large communal smokehouses where meat products hung six feet above the slow-burning fire, and the smokehouse also acted as a storage facility. If our ancestors had known electricity, would they go into the trouble of smoking/drying meat for weeks? They were smart people; they would do what we do today: hot-smoke the meat, cook it, and store it in the refrigerator.

Cold smoking does not need to be a continuous process

The fire was maintained during the day and was usually unattended at night; it simply died out and was restarted in the morning by adding wood to still-hot embers. And if it died out, a new fire would be started. Remember that the smoke accounts only for a fraction of the time a burning log provides.
People imagine that soaked in water wood chips generate more smoke, but this is incorrect. They generate a lot of visible steam vapor that will soon disappear. When heat is applied to wood, the moisture starts to evaporate. Even a well-seasoned wood still contains about 20% of the moisture that has to go away. Then as the wood dries out, it reaches a much higher temperature, and at that stage, it generates smoke. It lasts a certain time, then the wood becomes very dry and bursts into flames, resulting in a significant temperature jump. This is why meat products were hung six feet or higher above the fire unless there was a separate fire pit connected with a smokehouse with a pipe or a trench. To make it short, the meat only received a thin cold smoke for part of the day. Burning wood logs differs from burning wood pellets or sawdust in modern smokers, who continuously produce smoke.
Meats can be cold smoked at night in winter, even in southern states of the USA, but they must be moved to the cooler or refrigerator in the morning when the temperature goes up; then, the process is repeated on the second night.

It is on the decrease as it is time-consuming, and we can hot smoke products in a few hours and keep them refrigerated. There are in Germany (Mettwurst) and in Poland (Metka) briefly fermented, and cold smoked spreadable sausages which must be refrigerated as they are neither dried nor cooked. Being raw meat, they have a unique taste and soft texture and must be consumed within a week. A popular cold smoked is tenderloin which also needs to be refrigerated as it is not submitted to drying. However, Spanish loin, known as “lomo embuchado” is stuffed into pork bungs and submitted to drying so it becomes a salami-like product that can be kept at room temperature.

No, they don’t; at least, most people think so. Very few products are commercially cold-smoked nowadays; the most known is lox (smoked salmon) which can be sliced paper thin. If it were hot-smoked, the flesh of the fish would flake and crumble, and the slices will fall apart. Cold-smoked meats are saltier and exhibit a firm texture. In the case of sausages, there is not much difference between cold smoked sausage that was cold smoked/dried for a long time and traditionally dried salami, as the manufacturing process is basically the same. Those products are not cooked but are considered safe to eat when they lose about 33% of their original weight. Of course, the cold smoked sausage will have a smoky flavor, and Italian salami or Spanish salchichón not. However, Hungarian salami is usually smoked.
Italians and Spaniards newer liked smoked products as they had the perfect climate for drying meats with steady prevailing winds at the right temperature. Those who lived up in the mountains needed to warm up the smokehouse chambers with fire, and some products were smoke-dried.

When smoking fermented products such as dry salami or German spreadable sausages, it is of utmost importance to keep smoke temperature down. German meat technology books recommend applying cold smoke below 18° C (64° F) for about 3-4 days. Slow-fermented dry sausages and fermented spreadable sausages can be cold smoked only. The initial drying temperature for fermented sausages falls into 18 → 15º C (64 → 59º F), range and cold smoke < 22º C (72º F) fits nicely into this range. Then drying continues at temperatures below 15º C (59º F). To sum it up the length of cold smoking is loosely defined, but the upper temperature should remain below 22º C (72º F). Unfortunately, this rule puts some restraints on making slow-fermented sausages in hot climates for most of the year unless some cooling methods are devised.

A quote from “The Art of Making Fermented Sausages” follows below:

“Think of cold smoke as a part of the drying/fermentation cycle and not as the flavoring step. If the temperature of the smoke is close to the fermentation temperature, there is very little difference between the two. The sausage will still ferment and the drying will continue and the extra benefit is the prevention of mold that would normally accumulate on the surface. Cold smoking is performed with a dry, thin smoke. If we applied heavy smoke for a long time, that would definitely inhibit the growth of color and flavor forming bacteria which are so important for the development of flavor in slow-fermented sausages (salamis). As drying continues for a long time and cold smoking is a part of, it makes little difference whether cold smoke is interrupted and then re-applied again.”

In XVIII century brick built smokehouses a fire was started every morning. It smoldered as long as it could and if it stopped, it would be restarted again the following morning.

Cold smoked meats prevent or slow down the spoilage of fats, which increases their shelf life. The product is drier and saltier with a more pronounced smoky flavor and very long shelf life. The color varies from yellow to dark brown on the surface and dark red inside. Cold smoked products are not submitted to the cooking process. If you want to cold smoke your meats, bear in mind that with the exception of people living in areas with a cold climate like Alaska, it will have to be done in the winter months just as it was done 500 years ago.
Fermented sausages are known to develop mold during the fermentation and drying stages. Applying cold smoke for a few hours will prevent mold growth for some time only. Then the procedure will have to be repeated. 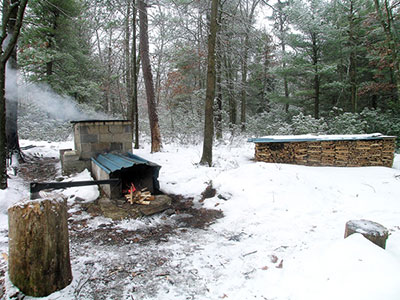 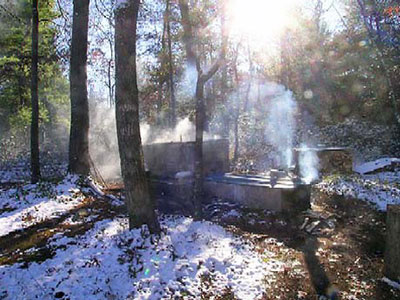 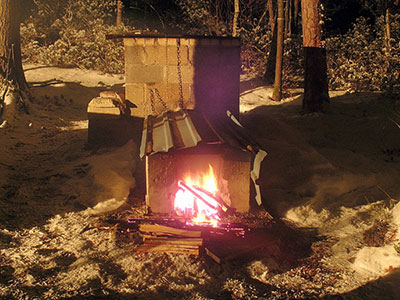 Using dry wood is of utmost importance when cold smoking. It is recommended to keep wood chips in a well defined single pile as they will have less contact with air, thus will smoke better without creating unnecessary flames and heat. By following these rules we achieve 75-85% humidity, creating the best conditions for moisture removal. Once the moisture content drops low enough, the salt present in the meat will further inhibit the development of bacteria and the products can hang in the air for months losing more moisture as time goes by.

Lox (smoked salmon) is smoked with cold smoke for an extended period of time. Applying hotter smoke (over 84° F, 28° C) will just cook the fish, the flavor will change and we will not be able to slice it so thin anymore. Cold smoking is a slow process and the hams, which lend themselves perfectly to this type of smoking, can be smoked from 2 to even 6 weeks. During smoking they will slowly be acquiring a golden color along with a smoky flavor.

Hot smoking dries out the surface of the meat creating a barrier for smoke penetration.