The majority of hobbyists think of cold smoking as some mysterious preservation technique that will produce a unique and superb quality product. What makes matters worse is that they start to experiment with different smoke temperatures and establish their own rules which then spread around and are repeated by newcomers into the field of smoking meats. Let's put some facts straight.

Cold smoking is not a preservation method, it will not preserve meat unless the meat will be dried. In addition a proper amount of salt is added to meat and the temperature of smoking is sufficiently low. It is a good additional safety hurdle that helps to achieve microbiological safety of meat.

Cold smoking is an old technique that was practiced not because it produced great flavor, but because it helped to preserve meats. There was no refrigeration, but meats had to be preserved. Cold smoking was nothing else, but a drying method. Itspurpose was to eliminate moisture so that bacteria would not grow. This technique developed in North Eastern European countries where the climate was harsh and winters severe. When meats were cold smoked for 2-3 weeks, yes, the meat became preserved due to the loss of moisture, but it was drying that made the meat safe. If the same meat was dried at 54° F (12° C) without any smoke present, it would be preserved all the same.

The pigs were traditionally slaughtered for Christmas and the meat had to last until the summer. Noble cuts were cooked or salted, but trimmings were made into sausages which were dried what was not easy with freezing temperatures outside. The only way to heat up storage facilities was to burn wood and that produced smoke. Too much heat was not needed as it consumed too much wood and it would cook the product instead of preserving. They were two choices: hang meats 5 feet above a small smoldering fire or burn wood in a firebox that was located outside. The firebox was connected with the smokehouse by an underground channel that would supply heat and smoke at the same time. A large smokehouse was also a storage facility and after meat was smoked, it was hung in a different area of the same room where it continued to receive some smoke, although on a much smaller scale. This prevented any mold from growing on the surfaces of hams or sausages, as molds need oxygen to grow. 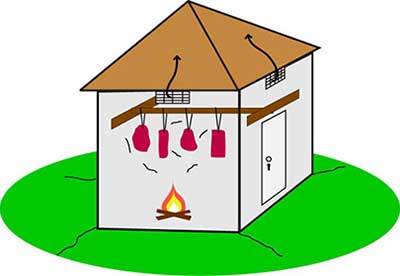 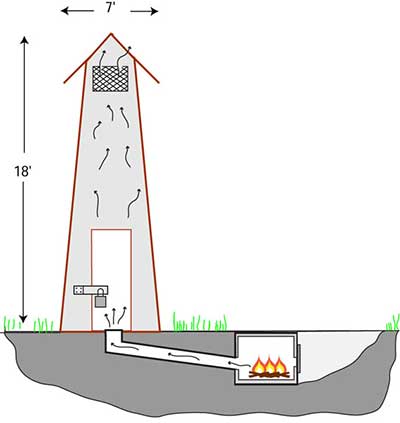 It had been established that meats dried best when the temperatures were somewhere between 50–60° F (10-15° C) and although the temperature of the smoke leaving the firebox was higher, it would be just right by the time it made contact with meat. Whole logs of wood were burnt. The fire was allowed to die out as people went to sleep. The meats hung until the morning and the fire would be re-started again. So, when you see an old recipe saying that ham or sausage was smoked for 2 weeks, well, it really was not, as it probably received smoke for about 1/3 of the time.

Italians and Spaniards were blessed with a climate that provided cool prevailing winds at right temperatures. There was no need to burn wood to warm up the drying chambers. As a result products did not acquire smoky flavor. For this reason people in Mediterranean basin are not particularly fond of smoked products, and people in Germany, Poland, Russia, Lithuania love them, but don't generally like uncooked air dried products. The majority of all processed meat products in Northern Europe are of smoked variety.

All Polish, German, Russian or Lithuanian technology books agree that cold smoke should be applied below 72° F (22° C). Occasionally a book calls for 77° F (25° C). Old German books specify temperature of cold smoke as 64° F (18° C) or lower. Any recipe that calls for 85° F (30° C) cold smoke makes little sense, as at this temperature proteins coagulate and the texture of the meat changes. The meat gets cooked. The surface area will harden preventing moisture removal and the product will rot inside. This hardened ring will also slow down smoke penetration.

To summarize, the purpose of cold smoking was to dry meats. The product was drying out and the smoke happened to be there. Preservation was on people's mindand not creating cold smoked flavor. Very few products are cold smoked today, notably cold smoked salmon known as "lox." The texture of cold smoked products isfirmer and they can be sliced paper thin without the help of chemicals. The taste is a different story, you must acquire liking for cold smoked products. In the past people already knew what we know today, that hot smoked products taste better.